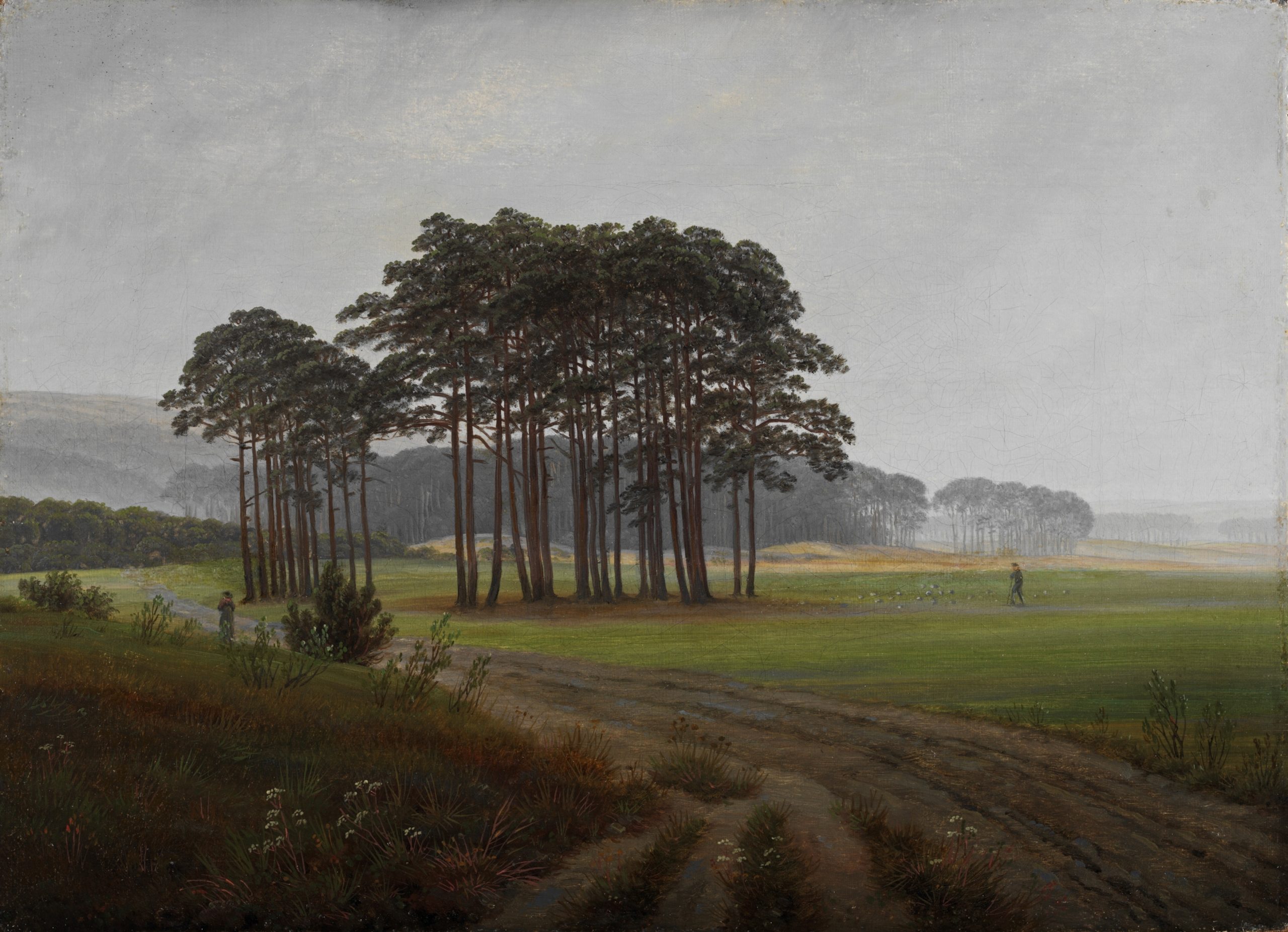 It seems that I have fallen back into the habit of reviewing new dungeon synth which is wonderful for me in particular since I seem to be getting back in the rhythm of being positive about new releases. This is easy since most dungeon synth has a knack of being very personal and inviting. This is one of the reasons why I loved the genre in the first place. Because I am back in the habit of writing and people seem to be reading, I am in the process of writing a primer on dungeon synth in 2020 for new and maybe veterans alike. This primer will cover quickstart albums for those first getting into the genre, the history of dungeon synth out of black metal and dark ambient in the 1990’s and finally what I am framing as the modern wave or internet wave or even Facebook wave that happened in the mid 00’s. I dislike using the term modern for something that only happened 5 years ago as the word contemporary could mean the same thing but it is easier than trying to come up with something more arcane sounding.

I am also revising the dungeon synth sound chart to be more like a D&D alignment chart which replaces the axes of law/chaos and good/evil with produced/raw and light/dark. The first Dungeon Synth Alignment Chart I made was based on the 9 introductory albums I would recommend to people first starting out in the genre. These choices are of course not going to be the most exemplary example of their alignment slot rather they are close and something I would choose for recommending newcomers. These 9 albums also coincides with the modern wave I was just discussing and does not include any of the early forerunners nor the material which came out in the weird dark period in the 00’s. I do not think these 9 introductory albums are perfect in any means but I think it is a good place to start. 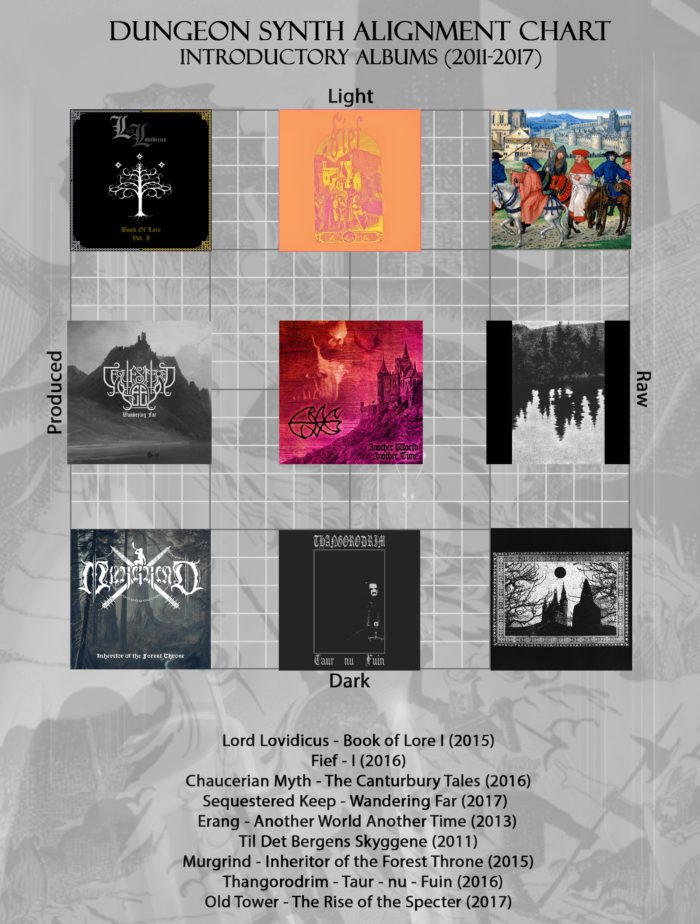 I would like these digests to be monthly but we will see where everything ends up. this current pandemic has given me a lot of time to reflect and have to myself which has led into having spaces to get back into writing about dungeon synth. I feel this community, while not the same as the mid 10’s, is something special all of the same.

French act Candlekeep has done something that is not unheard of, but rare in the age of equitable access. Not only has Candlekeep released a stunning debut, but this debut feels more produced, cohesive, and important than other releases in recent memory. The emotion, reach, and presentation of The Death of the Gatekeeper shows everyone that new classics are still being made and left field gems can b e found almost anywhere.

Much of what I said about Candlekeep can be about Avdypet with small caveats. While Kapittel does feel like a new classic in the field of dungeon synth, its dedication to the old and barren sounds of 90’s dark ambient and dungeon music is astounding. With two long tracks, Kapittel not only worships at the altar of old school DS but rather is its own subterranean lair complete with flickering torches fueled by its own wicked magic.

In my initial review, I believe i was taken by the label which supports Runecaster’s most recent release. Cosmic Ocean is host to a bunch of weirdo electronic and the Scarlet Kingdom feels like a momentary delve into fantasy lofi-scapes. the fact that Runecaster leans heavily on fantasy tropes and has an air of tongue and cheekiness when it comes to the themes, The Scarlet Kingdom never feels cheap rather it veils the listener in warbly visions of far away lands that lie on the edge of dreams and nightmares.

I was honestly floored by Treasure Seeker when I first heard it. This was half due to the cover which led me to the expectation of a halfway produced demo rather than something that was exhilarating and transformative. Much in the same tone and style as Hedge Wizard, Treasure Seeker allows listeners to browse their wares of magic and wonder with a caravan full if riches and mystery. Quest for the Secrets Beyond Time might looks like another quasi produced demo but it is far and beyond something that is well worth anyone’s time.

I sometimes ask myself if I ever wanted Depressive Silence worship and the answer is always yes. Polar Keep is a winter synth project dedicated to not only the imagery of winter but the chilling sound of castles encased in the snow drifts and the blackness of night to shutter out all warmth. This self titled release is dedicated to acts like Depressive Silence with its stoic watch over landscapes blistered with cold.

Dungeon noise has been something that always fascinated me as its original inception constricted the scene and regrettably caused lots of animosity throughout the scene. While I could talk days about dungeon noise, the latest release from Grimwin’s Forge is immersive enough that I forget about the conceptual aspects of this niche style and are spirited away to the heavy landscapes of raw forest creatures.

I feel the leap between dungeon synth and space exploration is closer than many people think. Shau’s worship of the Voyager missions and inspiration of ambient journeys through the darkness of space is not unlike the dungeon crawling ancestors that founded the genre. Perhaps this is the future of the sound and Shau is a time traveler from the distant reaches of time and space.

In recent memory this release is perhaps the one that least fits into the idea of dungeon synth. this is also why it is wonderful. With a tag of “astral depression,” Celestial Congregation combines the worlds of atmospheric black, depressive black, dungeon synth, and dark ambient into a record that defies expectations since there was no one dreaming of this in the first place.

since putting this release int he queue for review, Synthosaurus has released two other records both of them not straying too far from this sound. if you enjoy the sound of prehistoric themed dungeon synth / woozy new age, then you are in for a treat since Synthosaurus brings the FUN to a genre that is sometimes to busy with cloaks and candles to crack a smile. I love this so much and am hesitantly watching other creature based DS rise out of the tar pits to reclaim the earth.

One of the greatrst tasepcts of bomBARDed’s various releases is its distance from the dungeon synth community. Similar to a wandering bard, OST Vol 5 is a collection of soundtrack work for an RPG podcast with incendtal music played in the background. This is that incidental music and it is wonderful. It is also not truly DS rather Earthbound inspired video game music that isnt from a video game. This release defies framing and genres as it can not fit into a neat space which is perhaps why it is so magical.