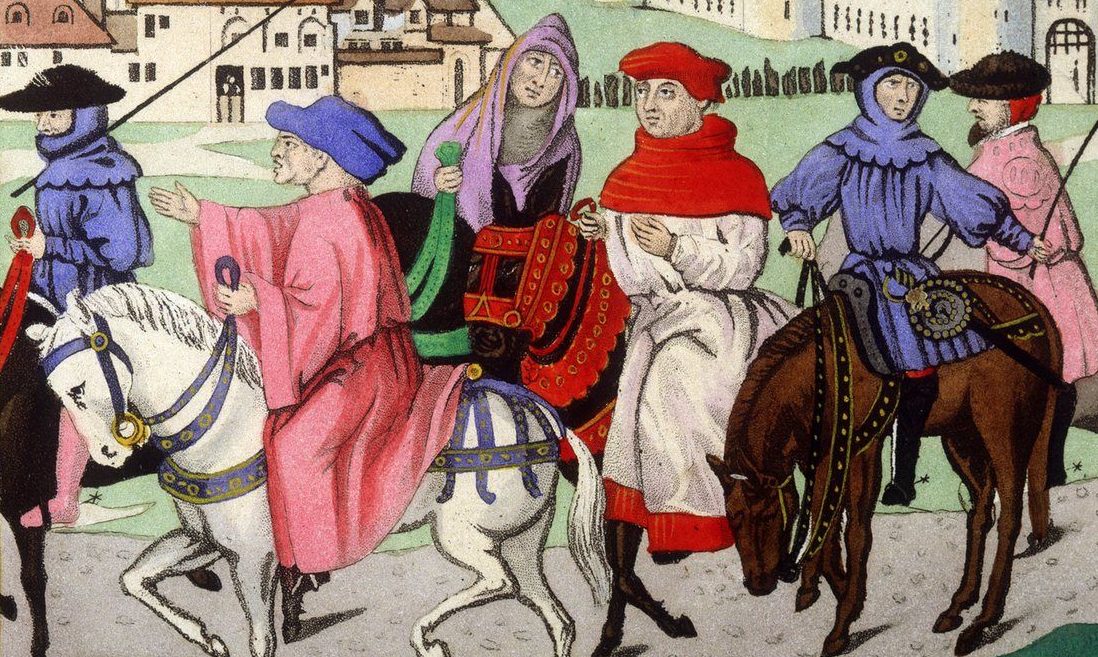 A few weeks ago, Out of Season contacted me to write a reflection on Chaucerian Myth’s The Canturbury Tales. This 2016 record is seeing a CD reprint and the label wanted thoughts and musings about the record for the booklet. I was more than happy to take a walk down a nostalgic path. I was also pleased to write about dungeon synth again as the sound still interests me after a brief sabbatical with other things. I do not think I will ever write monthly digests again but reflecting upon my time with the sound has been a transcendent exercise — one that I think I will revisit old and new works from time to time.

Canturbury Tales has been a favorite since the time of its release with a short write up in my Dungeon synth Digest and leading to an interview with its creator. It eventually made it to both end of the year lists from Ross the Boss and myself. As we approach 3 years since its release the below thoughts and feelings are just part and parcel to a record which is coming to be a definitive moment for contemporary dungeon synth. I wish you all the best.

Listening to the opening strums of “General Prologue,” the overture to Chaucerian Myth’s Canterbury Tales, ushers in memories from a specific time which now feels centuries old. It is hard to believe this record was released only 4 years ago since it feels that so much has happened since then. By 2016, I was already a year and a half into an obsession with “dungeon synth” which led to a innumerable recommendations, a series of articles, and dozens of Bandcamp writeups. At this point, I was a comedic internet spokesman for dungeon synth and its possibilities for nearly everyone I met. Bedroom synth music disseminated among a growing internet scene of fantasy nerds? It was everything I dreamed music could be and at the end of 2016, I saw new releases by Thangorodrim, Fief, Skarpseian, Barak Tor, Sequestered Keep and of course Chaucerian Myth. In my short time with dungeon synth, 2016 felt like the time when many good things were being made and more importantly when its online community was cohesive and productive. Canterbury Tales safeguards these memories which are now synonymous with its gentle sounds. These are the memories I still revisit with satisfaction and something that will always be visited in tandem when listening to this record.

Before famous Bandcamp articles and before the fracturing of the sound into tribal styles and rival factions, dungeon synth was a weird online community which mostly operated on Facebook and a few forums. It is important to note the style was already decades old but by 2016 it was experiencing a congregation of niche popularity ruled over by its few custodians. Handfuls of DIY record labels supported dozens of DIY musicians working entirely independently for a fandom which consisted of small but loyal consumer base. Digital albums were mostly free and cassettes were low costed which came with stickers and other personalized ephemera. I still have collections of candles, stones, pagan knick knacks which came from mysterious webshops that were ordered blindly . It was a time when I had conversations with the creators about the music, games, and books all while silently celebrating our odd fellowship. It was a time when the line between musician and fan was thin if almost non existent and to be excited about this sound was rewarded with an intimate experience.

Canterbury Tales was a pitch for dungeon synth and the possibilities of its reach. An almost four ambient synth record dedicated to the prose of Gregory Chaucer’s immortal classic of the same name and was not only something that was easy to listen to but exciting to talk about to other people. With 25 songs, each dedicated to a different book of Chaucer’s epic, the debut by Andrew Oliver became ambitious in its design and transcended expectations in its execution. While some pieces were brief regal tableaus, others were narcotic dreams in drone stretching past 15 minutes in length. Its 4 cassette box set, released in limited edition by Out of Season, came in a polypropylene case which felt like unearthing church music in some dusty flea market. There seemed to be no regulations regarding time, economy, or aesthetic when it came to making an album. Canterbury Tales was a milestone in how much could be made and offered to its community for so little. It felt like a gift to anyone who was slightly into the style which came at during, what now seems like, an indispensable year.

Canterbury Tales would precede a long career of records that was uninterested in resting on its laurels. What could have been a short career of dorky literary worship soon turned into an idiosyncratic journey into experimentation. This journey would run parallel with some of the community’s weirder growing pains, a period which amounted to scene drama which cracked the veil of a wonderful fantasy. 2017’s Troilus and Criseyde saw the same Canterbury sound just stretched and warped over the story of Chaucer’s tragic love story. The Book of Margery Kempe (named after the 14th century Christian Mystic) would stripe its already minimal sound down to noise and madness which was befitting of its dark themes. Chaucerian Myth would returning to literary stillness with 2018’s The Faerie Queene though through its soft steps still possessed the ragged stagger of a creator who had just stepped in from the frigid wasteland.

Perhaps why I have identified so much with Chaucerian Myth, in all of these years, since its musical journey seems to be at pace with my interest in dungeon synth and my feelings towards the style. This is perhaps why I have come to adore the sounds and initial adventures of Canterbury Tales since it precedes a more complex story of love and lose which come from the sounds of a bedroom synth. I will always look back on 2016 with wonder and a growing sense that this year was special for some cosmic reason. In the grand scale of things, a good year for dungeon synth seems to be on the very low end of importance though to those people who were also very excited this year, this moment in time will live enshrined through the lush minimalism of it music.