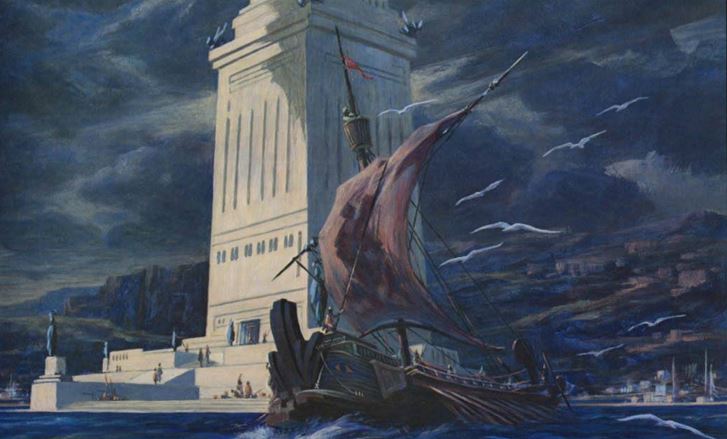 Roy Krenkel was an American illustrator who was a contemporary, and colleague of fantasy titan Frank Frazetta. Krenkel, along with Frazetta and Al Williamson contributed cartoons for the growing speculative market created by EC Comics. Krenkel’s work can bee in issues of Weird Science, Incredible Science Fiction, and Weird Fantasy and had a savage world charm all of its own. Krenkel’s mastery over black and white detail complimented the strange stories which were written for a strange demographic of teen and young adult fantasy enthusiasts.

The Pharohs at Alexandria represents one part of a series of paintings done by Krenkel commemorating the Seven Wonders of the Ancient World. Painted in 1975, these series of paintings are not as fantastic and outrageous as fantasy art of its time rather represents a longing for the roots of imagination. Though Krenkel has a portfolio of near nude and naked jungle barbarians with beastly companions, it is his love letter to the ancient world which is most interesting.

The Ancient Wonders which were Greek travel destinations in newly conquered lands during the 1st and 2nd century. These destinations created an aura of romantic marvel which were tied to the cultures in which were recently explored. The Lighthouse of Alexandria represented not only architectural ingenuity but a prescience for navel coordination. Once the tallest structure ever built, the lighthouse was only one of many structures marveled by not only the ancient world but the middle ages and even today. Alexandria’s Library and Necropolis cemented the cities’ reputation for being a haven of genius advancement.

Krenkel’s painting depicts an aspiring cargo vessel as it blazes through turbulent storms which amass over the ivory tower. The winds whip at the tower’s flames hoping but never extinguishing the beacon. Krenkel’s painting pays tribute not only to the pioneering spirit of ancient explorers but to the spark of imagination which was held by people long before the invention of fantasy books, comics, television and film.