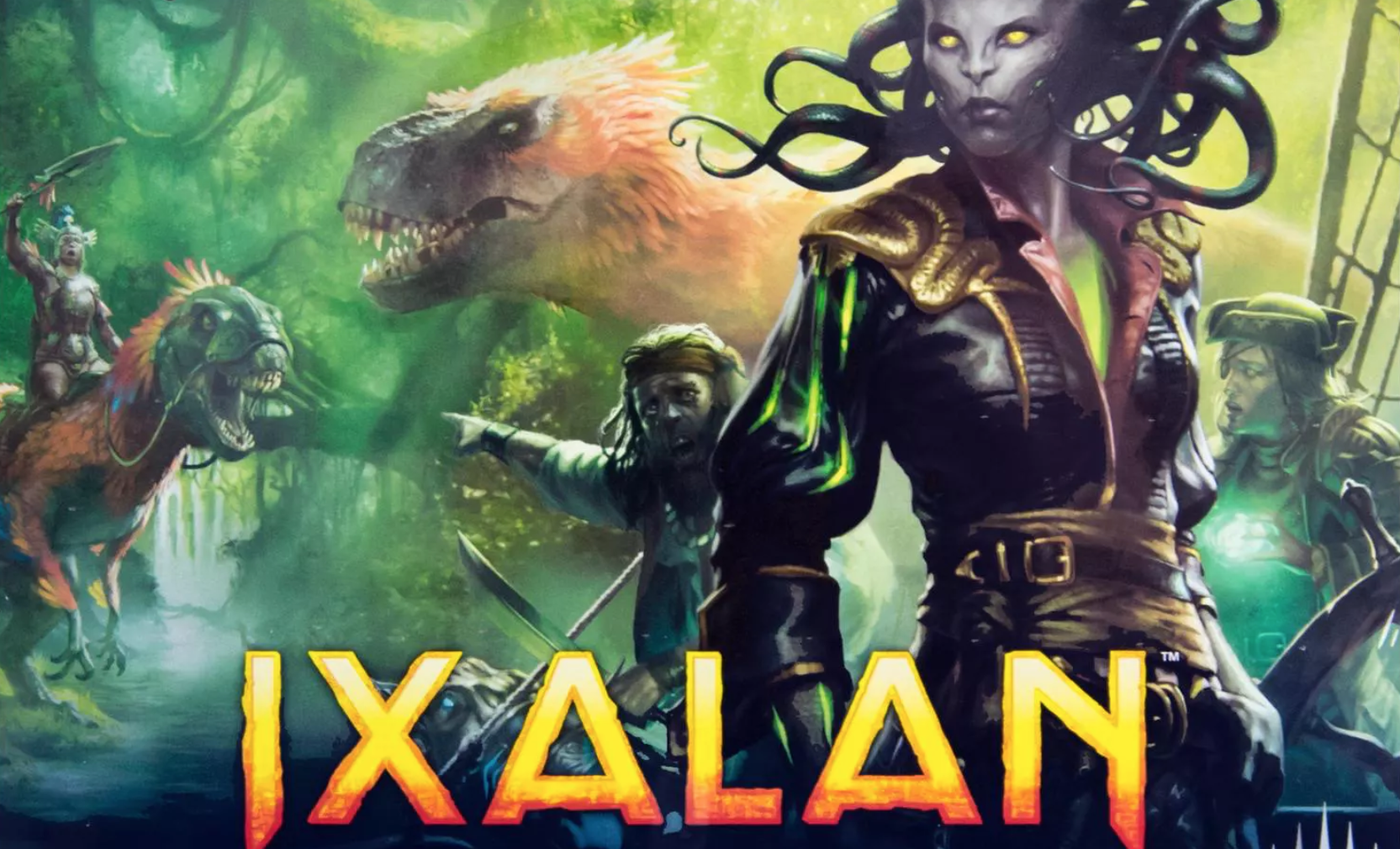 I have always wanted to do more Magic the Gathering content on this site but have found myself unable to frame a good concept. For the past couple of years I have predominantly played Commander (EDH) with various plunges into Pauper, Legacy, and Modern formats. Even though Magic has taken up a large portion of my life, I felt in no way informed enough to write articles on the subject. More so, the amount of content and things I wanted to talk about was so vast, I could not find a reasonable place to start. That was the case until the vast jungles of Ixalan were announced.

Ixalan is the 76th expansion for Magic the Gathering. I can not even begin to think about catching you up on everything. Suffice to say every few months, a new set is released with new cards and an accompanying storyline. While the attached story is an interesting concept, the actual narrative of these sets are average fantasy plots bordering on overwrought comic book plotlines. The storylines almost always deal with Planeswalkers which are dimensional traveling wizards encountering new worlds which end up being the sets. Ixalan sees two Planeswalkers, Jace and Vraska, upon the lush jungles of a Mesoamerican / Aztec inspired plane. What was initially drawing to Ixalan was its seemingly slapdash combination of numerous tropes including the golden age of piracy, vampire conquistadors and finally and most importantly, motherfucking dinosaurs. While this sounded like a stoned late night brainstrom session has been developing as one of the more fun casual sets in recent memory.

Ixalan is a tubal themed set seeing four tribes, The Brazen Coalition (Pirates), Sun Empire (Dinosaurs), River Hearalds (Merfolk) and Legion of Dusk (Vampires) doing battle against each other for gold and glory. While I am personally lukewarm regarding the concrete plotlines for Magic the Gathering, I am a huge sucker for its lore as previous sets have urged me to fall head over heels with excitement. From the Greek mythology inspired Theories to the Ancient Egyptian cast Amonkhet, to the Lovecratian infused Shadows over Innistrad, Magic excels in flavor for both genre ready sets and hand crafted lore. This extends to not only the look of the cards but the mechanics of the set and how it interacts while playing. Aside from the idea of pirates and dinosaurs being in the same set, Magic the Gathering continues to appeal to casual players as well as its more seasoned veterans. This is why I found Ixalan the perfect set for a showing new people the game. Starting out with Magic can be intimidating. From the depth of a card pool to the sometimes overwhelming amount of formats, starting out can be emotionally overwhelming as well as financially draining. This is why starting out with one set and having a limited trading card economy not only shows new players the possibilities of the game but also keeps it manageable. Ixalan was the perfect landscape for a kitchen table league as its value, as a set, was less chased than previous expansions due to high value reprints not be included. Belwo is an outline of some of the foundations for a league devoted to the casual fun of Magic.

My playgroup each bought an Ixalan bundle (35$) which came with 10 booster packs, 80 basic lands, a spindown life dice, in a cool sturdy box which was built to last. In theory this is all one needs to make an magic deck. When played against other bundle decks, the power level is about equal meaning all of the decks are in between a draft deck (made out of three booster packs) , and a real magic deck (not built from boosters). What makes the decks better is trading into other cards or buying singles. The trading option for our group comes with the idea that the cards opened represent the available cards and people can trade along a equal exchange for other cards with Mythic, Rare, Uncommon, and Common having flat value and being able to be traded.

Rating cards strongly among their rarity is not an entirety useful way to evaluate cards but for the purposes of introduction, it is a good place to start. 10 boosters each will leave a dry trading pool so adding in booster pack prizes for games will keep the available card pool deep enough for interest. There is also the possibility of buying singles which feels like cheating and can be expensive but in reality is the only way to viably tune up a deck.

The thrill of opening boosters is amazing but is soon dwarfed by the inconsistency when searching for specific cards. This is why buying singles can be an oiption for a kitchen table league as long as your group is in agreement with limits. At this moment the mot expensive card in Ixalan is “Carnage Tyrnat” with “Hostage Taker” following suit being above 20$. Magic can be an deep hobby both mentally and financially and one could invest a large amount of resources into exploring this hobby. As someone who has gone to the depths and come back, exploring the hobby casually does not have to be more expensive than any board game one would buy.

The prices for single magic cards is dependent on supply and demand of competitive formats. The most popular format for competitive magic is Standard seeing decks built out of the most current two expansions which rotates on new releases. Newer cards will be in demand to use for standard decks which have the possibility of dropping once it rotates out of the standard format. For a casual kitchen table group, setting a price limit not only keeps everyone in check but for new players does not exhaust their resources investing in expensive cards that will be worth a third of their price in a few months. This is why for our kitchen table group, buying single cards is limited to Ixalan only and anything above 10 is dealt with via waiting for it to rotate out of standard (and hopefully drop in price) or making proxies and waiting until they become reasonable. Buying expensive cards to compete in tournaments at at game stores is necessary and something which is apart of the hobby for many. If you are playing with friends in your kitchen and intend to do so for the foreseeable future, there is little reason (outside of personal want) to have a real playset of Carnage Tyrant instead of a basic land with the words “Carnage Tyrant…raaawwr” written on it with marker in place of buying the real card in a few months.

As much as I support this game and continue to do so, the secondary market perpetuated by local and national gamestores can be intimidating and crazy for new players and veterans. It can also get in the way of playing the game and ultimately having fun. Ixalan has been a blast to explore casually and even reaching in the more competitive levels. At the moment, there are two dinosaur decks, one merfolk, and my pirate deck that are being tuned. Next article will explore some of the individual decks, cards, and interactions in the lush jungles of wacky fun.