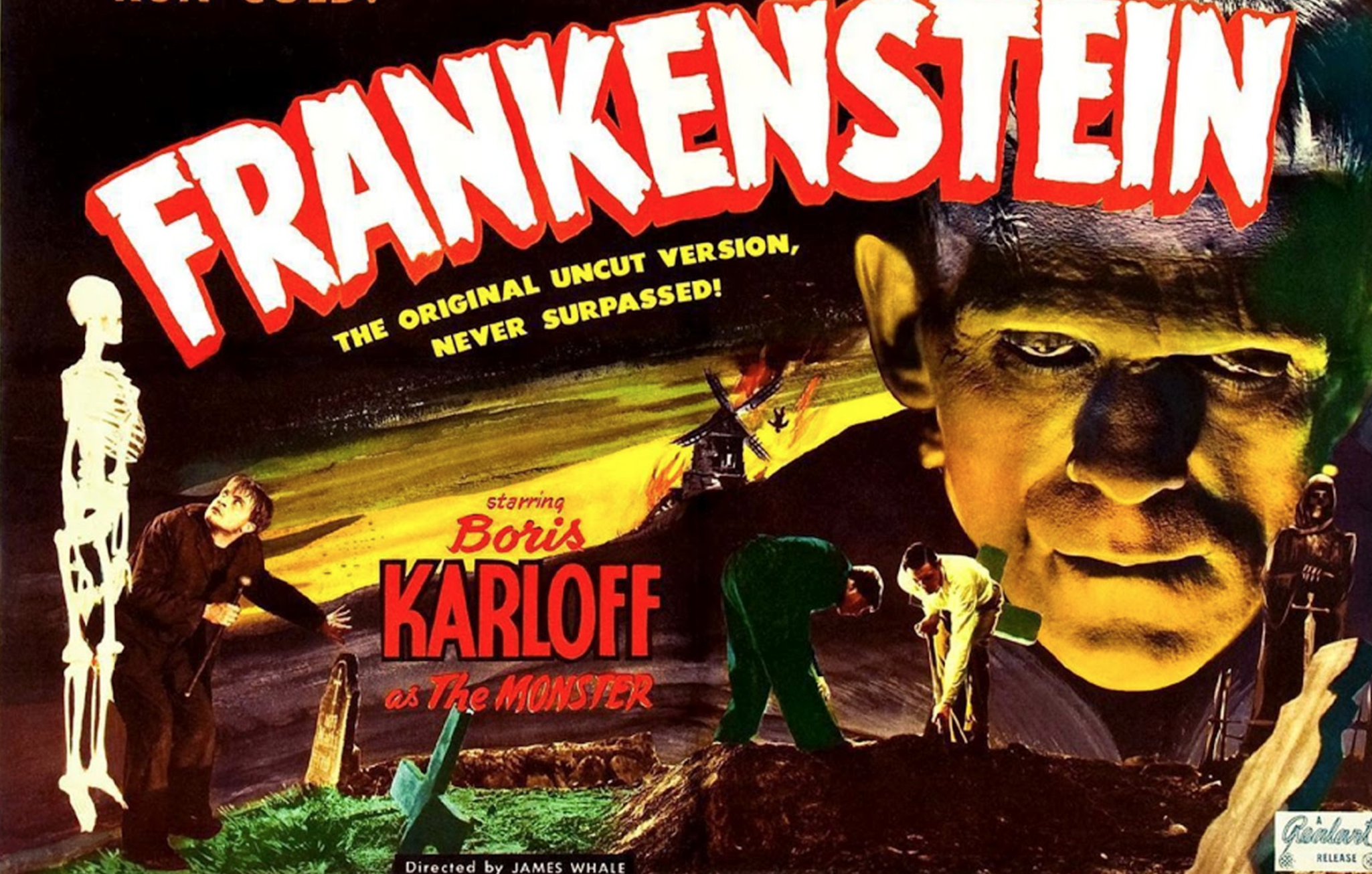 Reviewing classic horror is entertaining in two ways. First of all, one is exposed to underrated gems such as last week’s The Old Dark House. Secondly, one is forced to reconsider classic movies that may not have held their value throughout the decades. I guess it is time to talk about Frankenstein.

When we reviewed Dracula, there was much to discuss about not only the original literary inspiration but the stage adaptation that served as its modern incarnation. Frankenstein is very similar to Dracula in that its literary roots lay far from what everyone would come to know of its story. Frankenstein, unlike Dracula, is unique in the the fact that what we know of the story is so different, it is almost another narrative altogether. This goes far beyond character name changes and illustrates a point about popular culture. Sometimes a story evolves on its own and what is left is so different than what its creator intended.

Like most Gothic literature, Mary Shelley’s novel Frankenstein is written in a series of fragmented correspondence and narratives. The original story details a crazed scientist found at the North Pole by Captain Wolton pursuing a giant monster. The crazed man is Victor Frankenstein and soon relates his life’s story of how he created life out of dead flesh and how that creation haunted him and destroyed everything he loved. No, seriously. If you haven’t read Frankenstein, the monster stalks and destroys everyone Victor cares about — even the poor maid. Everyone. Victor then dies leaving the monster mournful, woe begone, and promising suicide by funeral pyre. The set designs in the film are exquisite including the opening graverobbing scene.

Frankenstein is an early example of science fiction and mankind’s role in the pursuit of life and death. The guilt and dread of creation is indicative, if not foreboding, of future inventions that would plague the consciousness of their creators. Frankenstein, the Universal horror movie, is much different in its themes yet has some important similarities to the novel. Guilt and horror in innovation is, of course, the core tennet of Frankenstein. Mary Shelly and Director James Whale may have dreamed their monster differently but both reflect our nature of grotesque alienation but only one will grunt his way towards world wide and legendary fame.

Frankenstein, the film, was directed by James Whale but was adapted as a stage production by Peggy Webling. Interestingly enough, Webling was urged to adapt the Shelly book by Hamilton Deane after his success with Bram Stoker’s Dracula. Both writers would take popular Gothic novels and transform them into the image we have today. Webly’s script made the Frankenstein narrative much more linear with the monster being mute and dimwitted instead of versed in eloquent prose. This dumb-ing of the monster transformed the focal point of the story and allowed him to become not the devious archenemy of his creator but a towering horror whose only crime was being given life.

Henry Frankenstein is a doctor who has an obsession with creating life by reanimating corpses. After Fritz, his hunchbacked assistant, accidentally procures a criminal rather than a normal brain, Henry’s creation becomes a lumbering beast with a penchant for violence. This whole experiment, by the way, is happening a few days before Henry’s wedding to the lovely Elizabeth. Henry’s creation is given life but soon turns feral and escapes the castle laboratory and wreaks havoc on the countryside. After killing a village girl, a now cliche angry mob of torch bearing villagers seeks out the monster and burn him in a windmill. This is the basic plot to the film, yet I feel things are not that simple. Nothing bad is going to happen here. Sorry little girl. You are a plot device.

Much like the Phantom of the Opera, the monster’s role is not only a horror antagonist but a tragic lead whose existence lives under the scrutiny of society. Unlike Dracula, the monster has no desire to kill but does so only in necessity. The eventual murder of Fritz only happened after being treated, consistently, with torture. The death of the village girl is set up as an accident with remorse and compassion from the monster. Henry Frankenstein is more to blame for the incidents which transpire, a theme of guilt that is also echoed throughout the original novel. The monster, who did nothing to deserve his fate, accepts his role as villain and meets his end, much like the phantom, by the hands of an angry mob. The monster would be transformed throughout the decades into a much more plausible villain but in this film, as well as the novel, there exists a degree of ambiguity, which is the strongest aspect of the story.

Aside from these momentary glimpses of narrative, Frankenstein the film is a clunky horror film that tries to go in various directions but ultimately feels lacking in all. Unlike Dracula, Frankenstein does not command the same tension and style. Unlike other horror films of the same time, its cliches feel dull and uninspiring. The angry mob scene is started with little provocation and feels orchestrated for the film’s finale. There are no real logical connections between the characters nor reasons for Henry to be so obsessed with his creation or Elizabeth to stay with this crazy son of a bitch. Sure, one can argue the novel makes these connection better but there are other films that make the story independent and plausible on its own.

Beyond the criticisms of the film, one has to realize that Karloff’s portrayal of the monster is undoubtedly his most recognizable work. This film made the already busy actor a sensation that lead to numerous sequels and continuations of the Frankenstein mythos. Karloff has the ability to communicate many emotions without the use of words, which is still impressive even today. It is just too bad his talents are trapped beneath a strong armed narrative that ends with torches and angry villagers. The trailer boasts the film is “the greatest horror the screen has ever known. While this is just advertising, perhaps I need to see the rest of the Frankenstein cannon to make an accurate judgement. Few can make that claim but I beleive Frankenstein isn’t one of them.