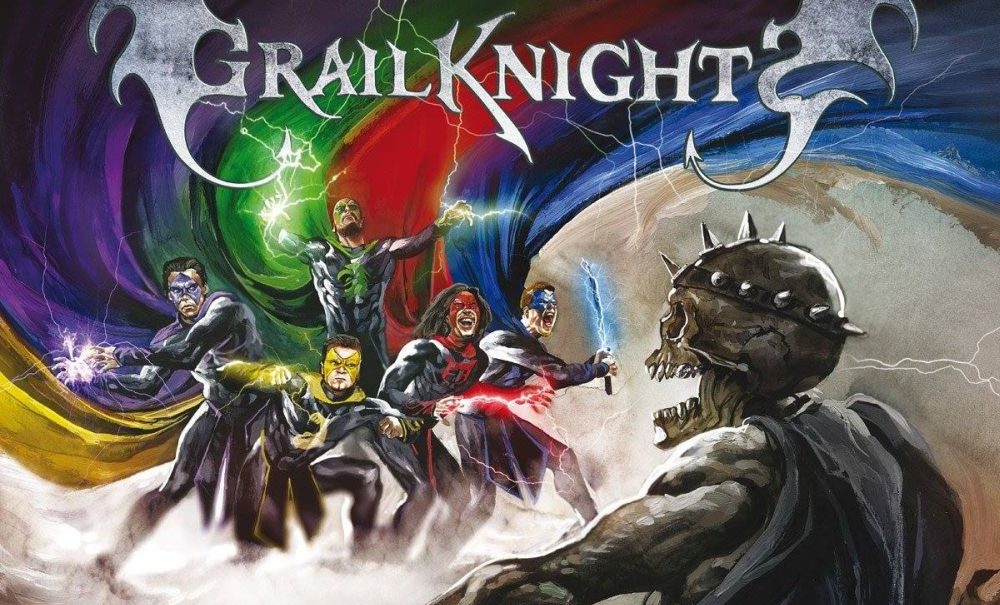 Grailknights are perhaps best understood through a long hard look at the cover art to their new EP. It’s a simple piece, detailing Sir Optimus prime, Count Cranium, Earl Quake, Sovereign Storm and Lord Drumculese flying in on a trail of neon lightning to do battle with their foul foe, Dr Skull.

As you surely now understand, Grailknights are fucking inexplicable.

Aside from their considerable gimmickry, what Grailknights bring to the table is a enduring sense of self awareness that permeates everything they do, making their goofy nonsense part of the fun. In a different world they’d have been a saturday morning cartoon show criticized for ripping off he-man, but here their shameless pilfering works to their credit, leaning with good humor on the clichés that would otherwise be unforgivably boring.

Importantly, they’ve also produced some fucking terrific music. All too often gimmick bands seem to think that a good enough idea is a substitute for talent, hence the unconscious flinch I made when I heard they were one, a spin through the EP proved me wrong. There’s nothing gimmicky about their playing, solid riffs and some enjoyably overzealous vocals make up as much of their identity as fantastically campy outfits and absurd names.

This is a band so dedicated to their 80s cartoon roots that their final song is a inspiringly flamboyant and unmitigatingly heavy medley of cartoon opening themes. Some, like the memorable Power Rangers solo or the Ninja Turtles theme are obvious choices but others, Rescue Rangers and a bizarre Spiderman a capella are particular standouts in weird yet excellent music.

The rest of their album is more standard fare in that it’s not a bizarre romp through the only memories I have of my childhood, but maintains the humor and passion throughout. “Dead or alive” is particularly bombastic, and the sweeping, power metal riffing is familiar without becoming boring.

Their biggest achievement, continually saving the world aside, is music that’s fun to listen to without falling back on ridiculous, gimmicky nonsense. Despite the ridiculous names they never succumb to the kind of overblown self-indulgence that’s ruined more than a few “joke” bands. In fact, the musical talent on display shows that while they might not take themselves too seriously, the music is fucking sacred. They might spent a lot of time and effort on superhero costumes, but they’ve got the muscle where it counts too and stripped of visual gimmickry, as they inevitably are on CD, they hold up just as well.