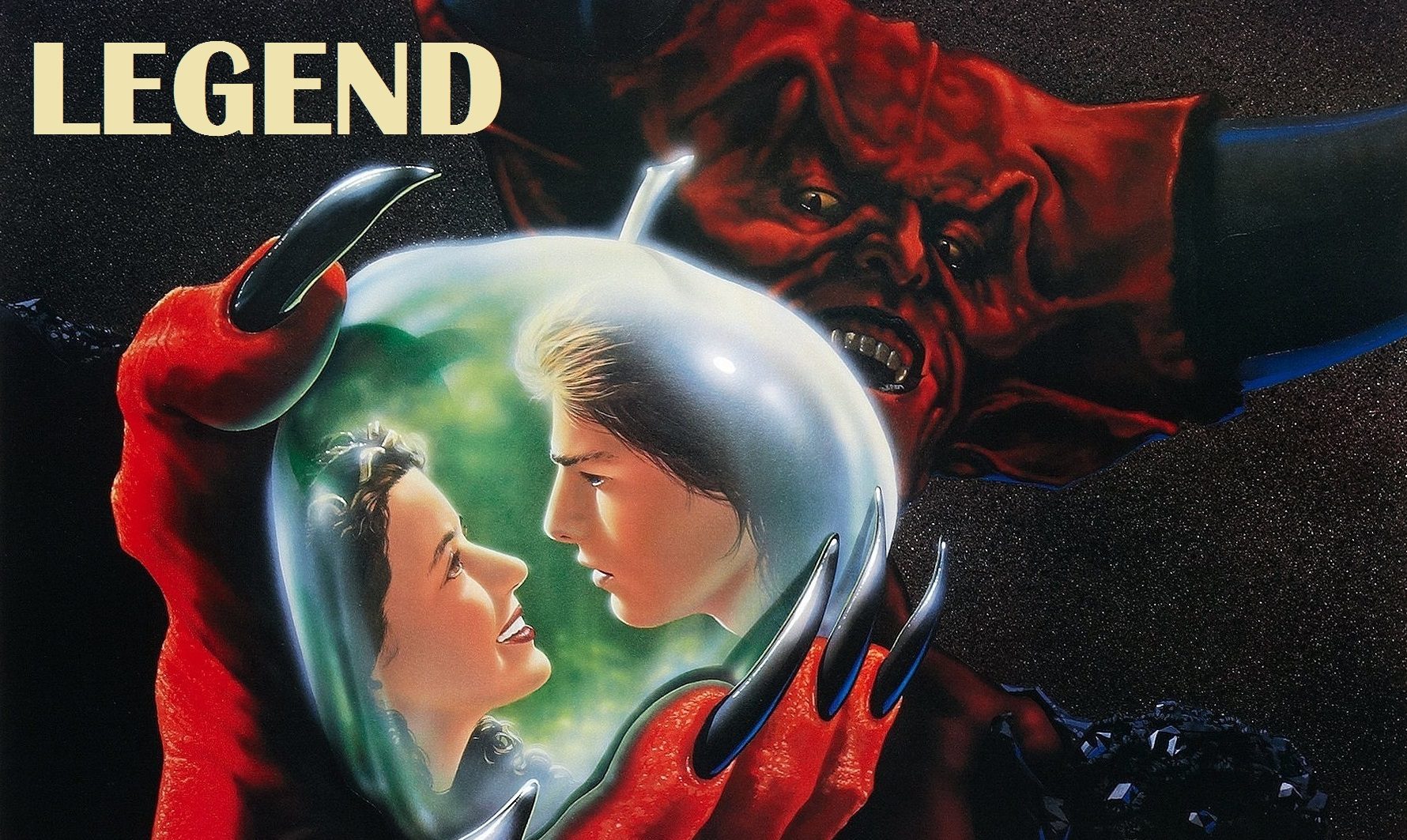 Legend could only have existed at the moment it did. Given any change in the time or formula and this 1985 fantasy film would most likely not be remembered as it is today. Ridley Scott, the director, had just come off a massive hit with Alien as well as a soon to be artschool favorite Bladerunner a year prior. Tom Cruise was rising in stardom due to Risky Business a year earlier, but had not reached the megafame that Top Gun, a year later, would bring. Tim Curry, well…Tim Curry has always split his time between weird ass movies and stage acting, but 1985 saw his two greatest works (besides Rocky Horror) with Clue and this film. I say Legend could only have existed not only for its strengths (including cinematography, production, and costume design) but also its weakness (including everything else).

Legend plays on the balance of two extremes. On one side, we are presented with a particularly dark and grim antagonist played by Tim Curry. Darkness sits in an underground castle waited on by goblins while meditating on his evilness. When the presence of two unicorns catches his attention, Darkness dispatches three goblins to bring down the mighty beasts and steal their horns. Legend has been praised for preserving some of the fucked up aspects of early fairy tales and soon one will see why. At moments, this movie is downright frightening but with that comes the other half. When near death metal album cover imagery is not stalking the scene in terrifying ways we are given the ultrapure, near laughable, scenes of harmony. Where do we start? Pollen forest.

Princess Lili is found wandering in a forest. Why she is in a forest alone and without any sort of armed guard is beyond me, but we know that this is a magical forest due to the lack of ticks, humidity, and spiders which cause me to shriek like a little girl. This ‘innocent’ princess is a bit spoiled and finds it okay to steal from country dwelling citizens. It’s alright though because she brings the food to the forest hobo named Jack. Yes, this is Tom Cruise. With a unibrow no less. Before he was a confident fighter pilot or young hot shot lawyer he was a feeble and emotionally immature woodsy vagabond that had hook ups with the unicorns. Hey princess, would it impress you if I showed you unicorns? Just be sure not to touch them, they are sacred…oh, look, you are touching them…why do I even bother?

Trust me, we are all confused to as what your role in this movie really is.

Things go batshit surreal when the three goblins poach the magical beast bringing about an ice age that for some reason only affects characters not essential to the plot. Jack, the nature trail hippie, is awoken by a shirtless elf named Honeythorn Gump, who is by far the scariest fucking thing in this movie. Well about equal with the cannibal baker. Gump, the souleater, agrees to help look for the now lost Lili. No seriously. These few scenes between Gump and Jack become increasingly bizarre with bubbles, riddles, forest wine, and emotional rollercoasters I could not follow. The entire exchange feels like a surreal fetish fantasy, with Ridley Scott sitting in the corner, a devastatingly intense stare on his face. Just like that. No. Slower.

Alright, so to find the unicorns and get back Lili, who now has been captured by the goblins and sits with the unicorn in a sauna made of lava, the group must go through a couple of steps to save them. This includes finding Jack a sword and a glittery shirt of chain mail that undoubtedly looks like a skirt. Maybe it could be a manly overcoat…nope, it looks like a clubbing dress of a girl who just lost a ton of weight but refuses to buy new clothes. Once out of harmony-ville however, the grimside of the story shines through. Our party, Jack and his fairy companions, travel through a tepid bog that really has no bearing on the plot but redeems the detour with stunning puppetry. The bog scene is particularly important as the imagery and narrative are reminiscent of old traditional fairytales. Jack distracts the bog witch by flattery and vanity, giving him enough time to awkwardly pull out his sword and slice off her goddamn head. Bam. Bedtime.

Introducing Oona the pixie, whose vocal talents can also be heard in Die Antwoord

The last half of the movie stays in this world of fright as the group descends into Darkness’ underground kingdom filled with horrifying things. The first in this litany of “not really for kids but you can watch anyway” is a cannibal baker who is so unnerving I, as a respectable adult fantasy reviewer, was scared. The dark terrors continues with a slow burning scene of Lili being seduced by Darkness who finally makes his full appearance and, holy shit, he looks awesome. Despite Tim Curry basically playing Dr. Frank N Furter from Rocky Horror, just with hooves and horns, Darkness’ character and design is by far the most memorable and long lasting image of this movie. Does anyone care about Jack’s mini skirt? Fuck no. Why? Because that shit isn’t as cool as those goddamn horns. From Pennywise to Herkermer Homolka to the Real Mr. Body, Tim Curry plays the coolest periphery characters in the universe.

Because this cool conclave of death metal imagery cannot continue, evil must be thwarted. Lili tricks darkness into letting her kill the unicorn only to free it while Jack engineers some stoner plan to get sunlight into the dark cave. Why? Because fuck physics. The sunlight, which is curiously more powerful than the setting sun itself, blasts through a door and into Darkness causing him to fly out the window of what I assume is a space side condo. Now he’s floating in damn space. What the fuck kind of death is that? At this point in the movie I assumed everything was right again and something good happens because, to be honest, I stopped watching the movie after Darkness left. Why? because I knew badass awesomeness would soon be championed by needless schmutz. Cue Kissing. Cue sunset riding. Cue unbearable goody goody shit.

I have not seen Legend in a long time, but within today’s world it still holds up as an entertaining fantasy film. The story and presentation could only have existed in a time where family movies were filled with scary and unnerving sections. The viewer is also reminded of how little action takes place in Legend, as the final battle scene is clunky and out of place. While this may sound like a criticism, imagine an entire movie that is near intriguing without much fighting. It is something the filmmakers nailed with conviction. Additionally, the use of puppetry and elaborate set design in lieu of digital effects preserves the film more than movies half its age that employed CGI. I wonder when people are going to realize that nothing will look better than fucking big scary rubber horns on Tim Curry.