The Hobbit – The Battle of the Five Armies 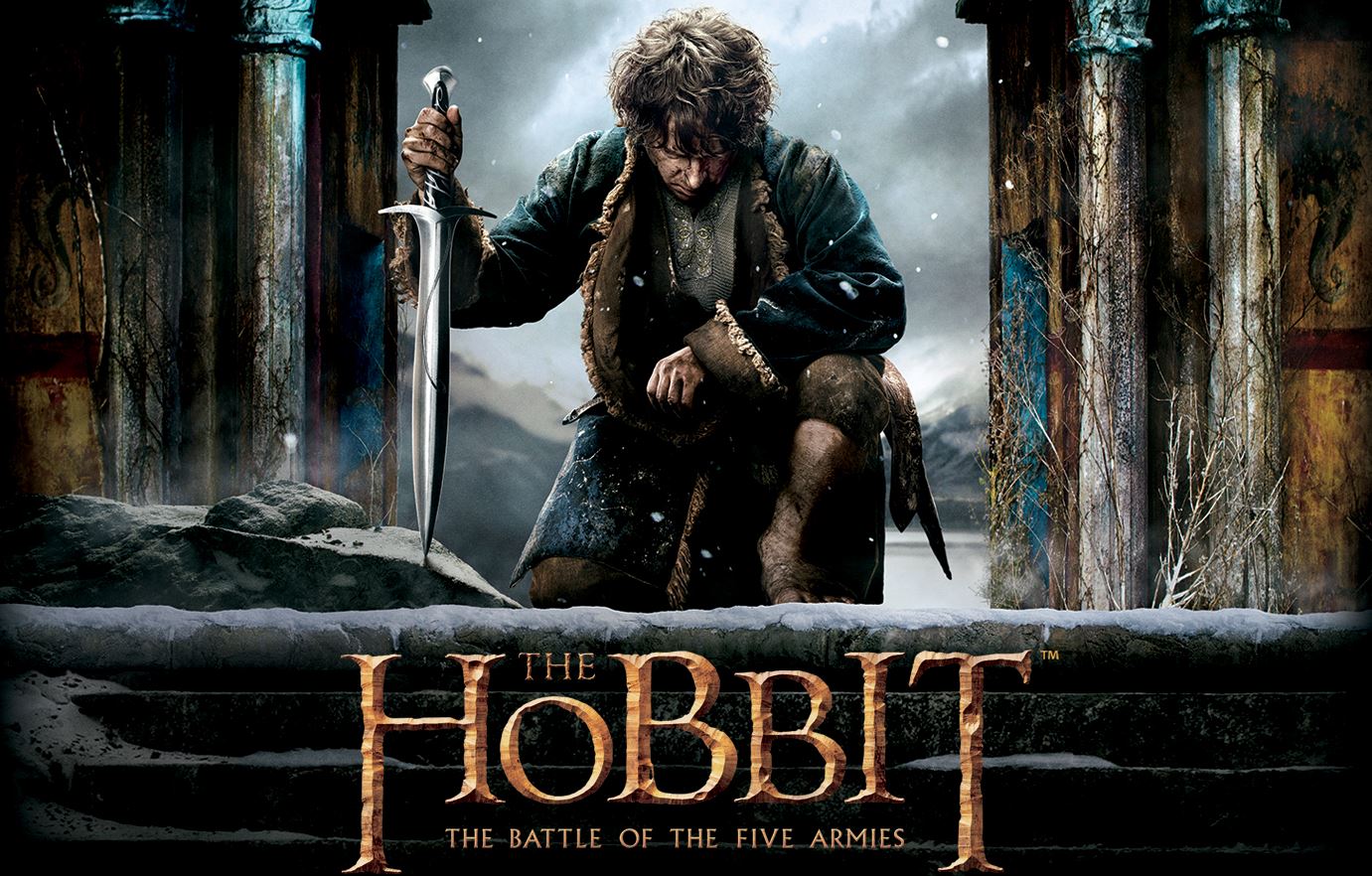 I feel the Hobbit series has become more of a point of contention for me, specifically directed at the rest of the world who seems to be dismissive of the entire series. One of the largest arguments I have made for the past three years is that Peter Jackson’s followup to Lord of the Rings, while not to the same caliber as it, is a decent enough fantasy film series that not only fulfills its role as an adaptation but works its way into setting the tone and stage for Lord of the Rings. Before we begin, let us clear the air and say, yes, this film didn’t need to be three films, yes, there are characters that are needless, yes, the filmmakers were gambling on recreating the same epic tone as the first trilogy with way less material and, yes, there are swaths of the series that could have been taken out. Besides that, there is a fucking wizard that drops from a flying eagle and turns into a bear before fighting an orc army. I feel we are at least goddamn even now.

That last sentence, which I wanted to work in, can be the summary of my thesis for the hobbit series. Despite obvious elongation of a children’s novel, the production of The Hobbit did the best job it could and with surprising success. While the scope of the film felt weird and forced going into the second film, the climax of the third installment makes the pacing of the series make sense. Reevaluating all of the events in the actual novel, there would be no possible way of condensing the story into one film. While two films would be more reasonable, three films is not that egregious of a crime. If I sound upset, it is only because I feel Lord of the Rings (and literary movies in general) give the public a sense of entitlement for movies to follow their source material. This clouds perception, in which good films that deviate from their entitled story are scorned for no other reason than the chance for people to point out inconsistencies. Can we just all agree that an actual replication of tone and storyline for the Hobbit would be way more juvenile and perhaps silly? Can we all just agree that The Hobbit is a good prequel to Lord of the Rings rather than a good adaptation of The Hobbit? Can you all just chill the fuck out and enjoy bear wizards? For fucks sake. I am not going to ruin anything but don’t get too attached to Smaug in the third movie.

The Battle of the Five Armies begins with the events that could have really went at the end of the last film. Smaug, being awoken from his gold slumber, attacks the village of Water Deep while the merry band of dwarves looks on with horror. Bard, the dashing sub-hero in the second film, proves to be the village’s savior by shooting a black steel arrow into Smaug’s vulnerable spot. This is a climax that seems better suited for the end of the second film, with Bard using his son as a stabilizer for a makeshift crossbow. Regardless, the audience is treated to dragonfire consuming the village with ruin and destruction and, of course, the master of Lake Town getting crushed by a falling dragon. Though this is different than him starving in the wild with his gold, the sentiment and comeuppance is the same. Oh, do not worry, Alfred, his wormy assistant, sticks through the film as the one dimensional weasel that is sort of like Wormtounge but just less interesting. The desolation of Smaug signals the end of the first act, with the humans as refugees, the company of dwarves as defenders of the Lonely Mountain, and a shit ton of other people all coming for a fight party. Before that however, we have to make sure Lord of the Rings is properly organized.

For the past two movies, The Hobbit has supported a subplot of characters leaving and establishing events that will have future importance in the next film. While the book does have Gandalf leaving for large periods of time, the film shows actual places that he sort of goes to. For now, Gandalf is trapped in Dol Guldur, which is pretty much the physical representation of many black metal albums. Dol Guldur plays a large side role in not only the war of the ring but also the establishment and fleeing of Sauron to the East. The film has a delightful scene of Galadriel, Saruman, and Elrond rescuing Gandalf from Sauron and laying waste, MMORPG style, to a bunch of incorporeal Nazgul. This is, again, part of adaptations and interpretations of many appendixes for the main story. While this may seem forced and service to people who only saw Lord of the Rings, the showcasing of the dark fortress only provides contrast to the varied world of Middle Earth. This also gives reason for the inclusion of the stronghold of Gundabad, the portal to the kingdom of Angmar, which are the lands of the Witch King,AKA the head Nazgul. Just saying. There is reason for this.

Before the battle, and lord there is a lot of fighting, the movie dwells and waxes half poetically on Thorin’s eventual succumbing to Dragon sickness. The sickness is a moral placeholder for the spell of greed that drives kings and men mad. The sickness could also be replaced with power, status, and anything else that would make a person lose sight of their true nature. The film makes it painfully obvious that Thorin is becoming less of a person and more obsessed with a seemingly useless gem, the Arkenstone, despite having claim and foothold now on the Lonely Mountain. Bilbo, being of noble mind, at least before the Ring takes hold, never succumbs to Dragon sickness and neither does anyone else. What is important in this section is really nothing, because Thorin eventually turns around during the climax, which has been happening for the past 45 minutes. How can you argue against a majestic elk steed?

Let me make things clear. There is little you can do wrong with grand scale fighting. Compared to even the current Exodus movie, Jackson’s depiction of Middle Earth battles are entertaining to say the least. Even when he plucks single sentence instances, like hungry Wargs from the last Chapter of the Hobbit, and turns them into strategic monsters for an Orc battle. Despite this fact, battles in Jackson’s movies hinge on a revolving cast of Deus Ex Machinas (eagles, dwarves, men, elves, wargs) that are always fun to watch. This is even counting the Dungeons and Dragons moments, when lead characters seem to defy death and always roll critical on dangerous acts. Well, how about I roll this cart down a hill to slam into the ogre that is attacking my family. Sounds good. Roll. 20. You succeed with flourish. This also includes the villains, which seem to get upgraded weapons as the battle progresses. Do you know what is ineffective in battle? A heavy stone connected to a chain. Do you know what looks really cool? A heavy stone connected to a chain while in combat on a frozen lake. From the eagles, to the skin changers, to the giants that have rock catapults on their back, everything in the battle of the five armies is fun to watch despite it feeling like it was shoehorned in for no good reason.

I will always defend fantasy despite it being outstanding. The Hobbit, as a series, was never boring or painful to sit through despite the long running times. As stated before, the addition of Taureil as only a pining love interest for Durin, and her eventual gushy death scene, is perhaps the closet the film comes to being unwatchable. Despite this however, there are bears dropping from eagles. Will this film series ever live up to your memory of Lord of the Rings? Probably not. Will this be the last series that Jackson does if they do not secure rights for The Similalarion? Probably. Am I am wrong in thinking that this wasn’t needed and they should have kept the Hobbit a children’s book. Sort of. Am I an asshole if I criticize differences in a kids book to a three part epic film series. Absolutely. Should I just chill out and watch bears drop from eagles. Yes, and you should have done it sooner.

Tags: Film Review, Kaptain Carbon, The Battle of the Five Armies, The Hobbit
Categorised in: Film