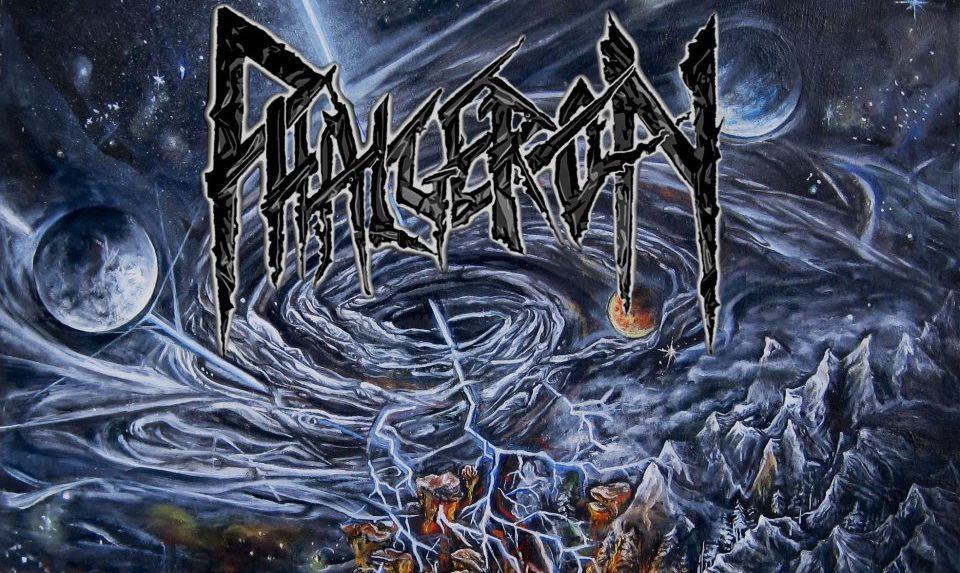 Long ago (~3years), and far far away (1/4 mile down the street), I saw a local band called PHLEGETHON open for TYR, ALESTORM and SUIDAKRA on the Pagan Knights Tour at the now defunct Knitting Factory in Hollywood (R.I.P.). I carved out some space to rock on the second level next to my then radio co-host Damon Wang and below us was a packed house of sweaty heathens who were in for a spectacular night initiated by three over-delivering local bands (EINVERA and STATIUS being the other two). This trend would continue the whole night in what was, by all accounts, the best pagan show the city ever hosted. Odin be praised.

On the stage now stood PHLEGETHON and what ensued was 30 minutes of crushing metal, the intensity of which, I wouldn’t have believed possible from a 3-piece that wasn’t named IMMORTAL. Suffice it to say, their set was top quality and I remember the details vividly as do most who were there. In the aftermath of that show those three local bands came by for Hollywood Metal Radio episodes and in the weeks and months that followed Lane Storli of Phelgethon became a regular and we spent many a night blasting epic heavy metal into the night sky and singing “The Bard Song” until my neighbors lost it. That would come to an end in the fall of ’09 as Phlegethon decided that they would return to their native Seattle having graduated from their birthing grounds, Musician’s Institute in Hollywood.

Fast forward three years… Phlegethon has been renamed PHALGERON and they have just finished the album that was three years in the making. The following is my best attempt at an objective review….

Cosmic Cataclysms is the strongest melodic black metal debut I’ve ever heard. Yup, I mean it and this band means business.

There are two particular aspects of Phalgeron that stand out for me. First is their ability to make catchy songs without sacrificing technical complexity. Tyler Sturgil’s guitar work is world class. Particularly, his trem picking which is always clean and memorable (to the point where you hum these riffs all day long). I mentioned IMMORTAL above in reference to the size of their sound but I’ll say it again, there’s a magic at work on Cosmic Cataclysms beyond just layering tracks that gives Phalgeron a hearty, thick sound, in contrast to many black metal bands that record thinly.

The second standout feature of this band is the interplay between the two vocal styles. Tyler provides the traditional, tortured, black metal rasps while bassist Lane Storli was bestowed with a deep baritone that he aptly applies both cleanly to the album’s narrative storylines and then in a pure death metal style while singing. The combination of these styles isn’t new, but it is atypical and in the case of Phalgeron, I say it’s expertly applied. Even the best black metal albums have a tendency to loose their initial punch a few tracks into the album. Towards the end of these albums the songs start to sound similar to the ones you’ve already heard and since the lyrics arn’t readily identifiable, songs rely heavily on the music and instrumentation for distinction. Even in the case of quality black metal, it is hard to keep the last few tracks interesting to the listener. Expanding the number of vocal styles within an album adds another variable for your ear to consider and this may be a contributing reason why Cosmic Cataclysms keeps your interest throughout (if not by musical dynamics alone).

Track by track, Cosmic Cataclysms opens strong with “Feeding the Phlegethon,” which is one of three quintessential PHALGERON tracks. The other two being “Creature of the North” and “Norloxius The Blood Smoker.” These are the band’s earliest and most well-known tracks. Track two is “Tyrant Lizard King”, a song loosely derived from the main melody of Jurassic Park which leads one to wonder why dinosaurs are such an underserved lyrical topic? (You stay out of this Hevisaurus!) Telling the epic tale and ultimate demise of this beloved apex predator by the era-ending meteor of reknowned size, this one may be the strongest track on the album. It’s a claim that surprises me because I didn’t think that any of the three listed above would be usurped when the album was finally released.

“Creature of the North” showcases Tyler’s trem-shred. Impossible to stand still for this one… always was. “Curse Be The Bane of Time” and “Norloxius The Blood Smoker” form a solid center of the album. Norloxius is especially strong and as mentioned, a signature piece for the band and easily the best lyrical narrative. I’ve heard this song progress from it’s early days when the then PHLEGETHON visited Hollywood Metal Radio in 2009 and to borrow some recent words from Pat Martin, who was at the most recent Phalgeron show in LA and was also an interim drummer for the band, “they just get faster and tighter every show.”

“Glory of the Many, “Interdimensional Ascension” and “Gods of the Godless” form the close to an all around stellar album. In these later track slots, where even good albums tend to lose their pace and punch, these three maintain the onslaught of melodic riffs, tight drums and haunting vocals. Fortunately for earth, Phalgeron has made the album available to stream on their Bandcamp page and while I’m hesitant to put up links like this in my reviews–because most won’t contribute financially–the exposure helps. And, I’ll stress once again that famous underground mantra again… if you dig it, support it! Also check out the lyrics on bandcamp. They are the perfect mix of darkness and humor to compliment a refreshing debut sound from this Creature of the North!