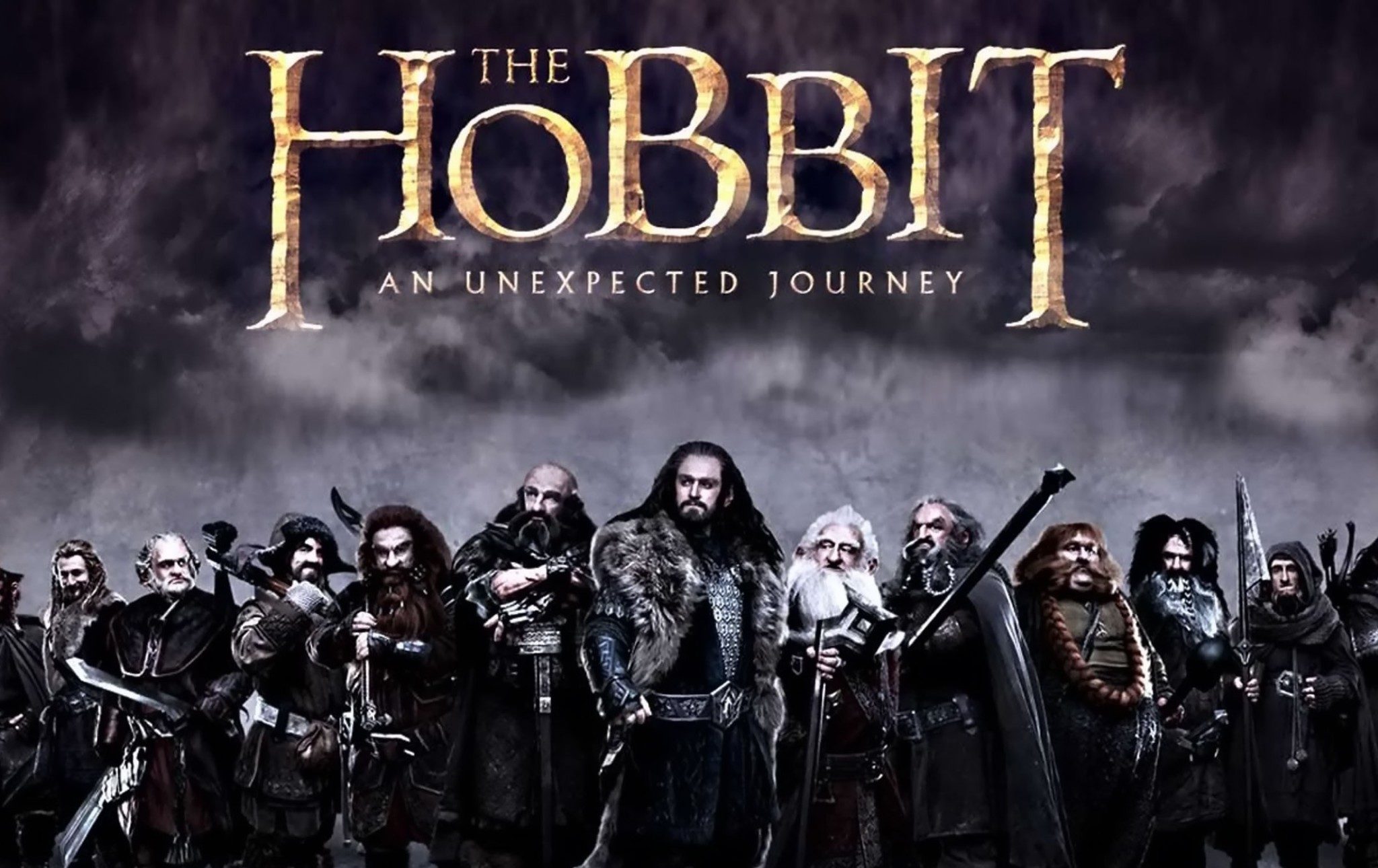 Yes. I know I am still rounding out 90’s fantasy movies but this is different. This is something special. With the release of The Desolation of Smaug, Peter Jackson’s second part in the massive retelling of The Hobbit, I thought it would be fitting to watch the first film, An unexpected Journey again. I mean, what else am I doing? It is the holiday season after all and what better way to spend it than in Middle Earth with dwarves, hobbits, wizards, and wargs? Also, I feel it is necessary to continually remind people of how this is a good film. Assholes. What the fuck do you want?

By now everyone with an internet connection or a memory that extends beyond ten years is aware of the three Lord of the Rings films, which were released every holiday season for three years between 2001 and 2003. These films popularized the world of Tolkien in a cinematic realm by bringing high fantasy to the largest audience. What ever obscure charm the books had before was erased and Frodo, Legolas, and Gimli now had faces that were etched into collective consciousness. After dozens awards and near universal acclaim, Peter Jackson’s follow up was decided to be a retelling of the book’s honorary prequel. Oh, it is also a kids book. Fuck.

I feel that mentioning The Hobbit’s original intention is important despite everyone that should know better. With no original connections to Lord of the Rings, The Hobbit was a closed children’s book, which was a whimsical adventure that was both fantastic and downright silly for the young readers of the 1930’s. After the success of the Lord of the Rings Trilogy however, revisions were made to connect it to the larger, more serious story. Despite these revisions, the Hobbit still retains its lighthearted nature that preludes the storm which would follow. Much like the progression of a fantasy reader, the Hobbit ebbs from children’s imagination into the more refined adult universe of the Lord of the Rings. The film itself did not have much of a choice in progression. Retaining that same childishness would feel regressive given the struggles and conflict already seen in the original trilogy. Additionally, attempting to sell a children’s story originally made for young adults in the 1930s to an audience now, with far different tastes, would be silly and futile. The goal of the filmmakers was to reinvent the story to not only appeal to a new generation of older fantasy enthusiasts but also to people who know everything that is going to happen. This is the setting for the Hobbit and why I seem to be so damn serious about it. Gandalf seems entirely resigned to fighting large monsters on bridges. He also does not seem to upset about this that it keeps happening.

An Unexpected Journey begins with an unwanted meeting of thirteen Dwarves, a wizard, and a very reluctant Hobbit named Bilbo Baggins. I will try not to recount everything in the Hobbit but let it be known, the dwarves are in search of a way back into their kingdom, which lies under the mountain of Erebor, AKA the Lonely Mountain AKA the home of now gatecrasher Smaug — a fearsome fire drake who sleeps on a pile of gold. Though this is the exact plot of the book, the film casts the plight of the dwarves as a more somber displacement than gleeful adventure. It is important to note the difference as the Hobbit film deviates wildly at times but all for the sake of cinematic interest and strength of story. Rather than the dwarves being a bunch of miscreants in colored hoods, they are now people, with a very real reason to trek through the dangers and reclaim their home.

The choice for Martin Freeman as Bilbo Baggins was a safe and possibly easy pick. Freeman’s work in British television such as Sherlock and the Office as well as American box office failures like Hitchhiker’s Guide to the Galaxy showed him as a solid actor with a lot of versatility in looking uncomfortable. Returning as Gandalf is the always amazing Ian Mckellen who looks passable in this role except for the opening scene in which he looks like absolute death. Perhaps the best new addition for The Hobbit are the ensemble of bearded dwarves lead by Richard Armitage, who played Sir Guy of Gisborne in the British adaptation of Robin Hood. These familiar characters combined with creative screenwriters and dense scenery is enough to make An Unexpected Journey an entertaining passage of time with a thousand hooks for escapism. This is, of course, unless you are an asshole and were expecting more.

While The Hobbit was a series of “fuck, a giant spider” adventures, An Unexpected Journey takes on a larger scope. Due to the story’s segmentation into three parts, an antagonist had to be cast for the first half, and that comes in the form of a pale orc named Azog the Defiler. The necromancer AKA Sauron AKA a Dimmu Borgir music video is also given a cameo with later expansion in the second film. With these additions, we are also given Radaghast the Brown (one of the 5 wizards only mentioned in the Hobbit) as a bird fecal smeared comic relief. Fuck it, it is still good. He has a kick ass rabbit sled. With a larger narrative, the cast of An Unexpected Journey takes a tour around Middle Earth hitting familiar sights, filling in loose ends, and contributing to a shit ton of foreshadowing for future events. The film also seems over concerned with mirroring The Fellowship of the Ring, so much so that scenes and plot lines seem to be copied for familiarity. Both stories tell of an adventure where unlikely companions travel through fantastical lands aided by friends and chased by foes only to complete some cycle of understanding through conflict. The only difference it seems is which animated creature pursues them. Warg!…No Troll! Alright so Gandalf mentioned the 5 wizards which are himself, Saruman, Radagast, and two commonly known in mannish tongue as Alatar and Pallando. Tolkien never gave the blue wizards common names and the filmmakers do not have rights to The Silmarillion so that is why Gandalf, in the movie, said he couldn’t remember their names. Just saying. I laughed. It was funny.

Much like Fellowship of the Ring with the Mines of Moria, An Unexpected Journey takes a roller coaster ride into Goblin Town. Just to be clear however, Tolkien’s use of the word goblin was pretty much used interchangeably with orc. Perhaps this is why the elven sword Sting glowed blue whenever goblins OR orcs were around. Maybe, Maybe not, as this film doesn’t really seem to concerned with consistency in Elven smithing. Does the Goblin Cleaver or Foe Hammer, also of Gondolin make as that of Sting, glow blue as well? Sometimes. But other times. Meh. The goblin chase sequence is perhaps the furthest the film goes away from the book as it manufactures a cinematic battle scene where whimsical delights once lay. The large scale cavern with hundreds of foes falling to their demise is impressive and leads to a showdown with the goblin king who gets disemboweled in a very un-children’s story like manner. This is all happening while Bilbo interacts with Gollum at an underground lake, where we are providied more backstory for the larger arc. Gollum still had more importance in this move than Elijah Wood as Frodo. Just saying.

After the Goblin Town escape, the company encounters Azog, the pale orc, and his pack of wargs, AKA weredogs AKA Helljackyls. This new encounter leads to the revised encounter with flaming pine cones originally seen in the book. The filmmakers once again take a seemingly goofy part of the book and transform it into a wildly over the top epic climax. Wargs with their tails on fire? No, fuck that. Thorin, the company leader walking through a valley of flames to face his fear and aggressor, Azog the Defiler amid chanting? Fuck yes. How about the smallest of the company learns true strength in the face of doubt and fear? Yeah. Eagles as a Dues Ex Machina? Why not. More fire? I wouldn’t want it any other way. As much as I am poking fun at this scene, it is a good way to end the first movie. The Hobbit was never three books but rather one 300 page novel. In the language of cinema, or at least in popular entertainment, there is no way not to end with something like this. Eagles flying away to the lonely mountain. How about more fire? No? Fine. Fuck you.

I am not a Hobbit apologist. My defense of the film is rooted in not only my enjoyment of the experience but also because I do not see how it differs from Lord of the Rings. I have found Jackson’s adaptation a sizable contribution to the lore and legends of the original story. Rather than cut things out and present a story as with the Lord of the Rings, An Unexpected Journey constructs things out of thin text to make flesh out a story with the best intentions of completeness. Jackson’s interpretation of Tolkien’s works has already been shown to be genuine and well crafted, and the Hobbit is the exact same thing as the first three films. I have used this time to make my case for enjoying the film and the An Unexpected Journey, as a film, is still entertaining and a fine addition to sit right before the Lord of the Rings. And if you don’t agree with me, well then fuck you.