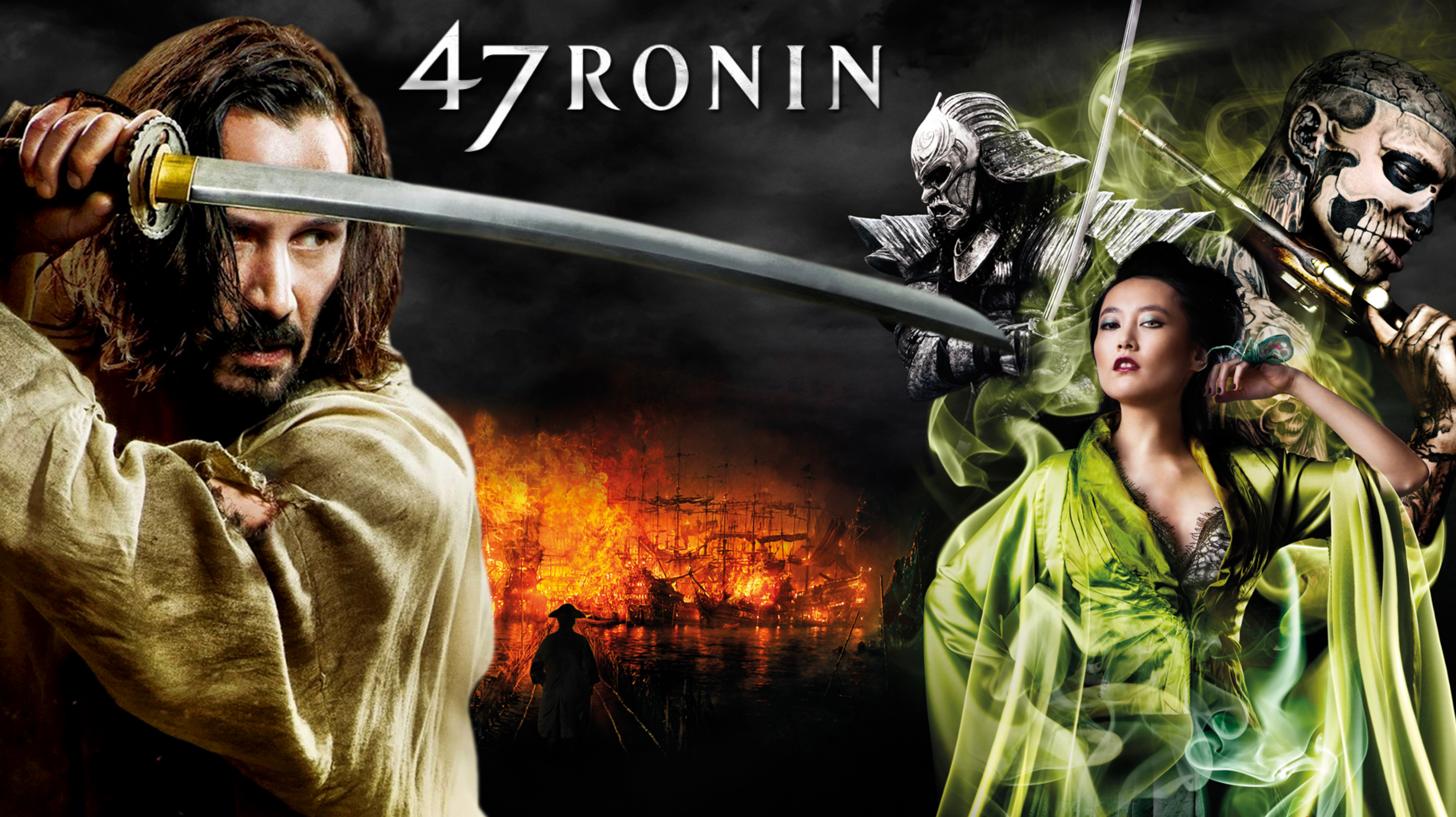 My wife is going to dislike this article. I feel her only defense for the new Samurai fantasy film is enjoyment. Maybe that is stronger than whatever I am about to say.

47 Ronin, the film, was a gamble to begin with. First off, a large american movie studio was attempting to portray a popular Japanese folk legend not as a historical drama but rather an action/fantasy film. While the film chose to cast popular Japanese actors, it also gave the reins to an inexperienced director with an astronomical budget. The film encountered a litany of delays, re-shoots, rearrangements, and was eventually taken over by the studio to finish the film before next decade. What follows is the unfortunate but foreseeable tragedy of 47 Ronin.

The 47 Ronin, in real life, were a group of samurai banished from their service (hence ronin) after the ceremonial suicide of their master Asano Naganori. The suicide was done as a restoration of honor after Naganori attacked the court official Kira Yoshinaka following a history of political maneuvering and disappointment. The 47 ronin sought out vengeance for their fallen master by murdering Yoshinaka and in turn were punished by their own court suicide. Within a very grim historical account came a legend of honor, loyalty, and determination that glorified the code of the samurai. The 47 became much like the legend of the Mayflower or Lewis and Clark, which took very real events and bootstrapped a suitcase of emotions and overtones. With all of this tradition comes Keanu Reeves.

47 Ronin, the film, inserts the very lovable and capable actor Keanu Reeves in the center of the story as Kai. To make up for the fact Reeves is sort of the wrong race for the film, 47 Ronin details the plights of a mixed race orphan who was raised by mythical beings in a magical forest. Yep, it is time to go. Let us do it. Within the first 10 minutes, the film lays out everything it is going to do and begs the audience to choose what they want to believe less. The film’s setting, on the edge of fantasy and history, is the least of its problems as 47 Ronin cradles the memory of a film that could have been damn near awesome. Fucking magical swords…I do not want to talk about it…

Aside from Keanu Reeve’s character being parachuted into the story, 47 Ronin does a decent job at recreating the legend of the actual 47. Adding to what was just recounted, a heavy element of magic is added, which not only motivates Naganori’s attack but also sets up an antagonist in Yoshinaka, who is aided by a cunning dragon witch. The film also spends a hefty amount of time with an ineffective love story between Kai and Naganori’s daughter Mika, played by actress and singer Kō Shibasaki. Shibasaki’s role in Battle Royal and Go allowed audiences to see the actress’s dimensions, while 47 Ronin casts her as one of the most useless set pieces in the entire film. Go ahead. Do nothing to advance this plot.

While the forty seven could conceivably take revenge for their master at anytime, the film is not allowed to advance until Kai is rescued from pirates. Alright. So following the suicide of Naganori, and the banishment of the 47, Oishi, Naganori’s second in command, is imprisoned for a year and eventually seeks out the help of Kai because of his magical roots. This sort of settles a rift between the two introduced earlier but never really fleshes it out. The magical element in this story once again gives reason for Reeves character to be in this film and Oishi plots a rescue mission from pirate town. If anyone notices Rick Genest, AKA zombie boy, in the film get a good look at him now because he literally has 5 seconds of screen time. I have no idea why he is on the poster. A CGI dragon has more importance than this character. Suffice to say Kai and Oishi escape and thus the main plot of the story can start almost an hour later.

One of the largest problems of 47 Ronin is its pacing. Nothing feels organic as characters are moved to new encounter areas much like a hastily thrown together RPG session. Kai and his band of merry ronin must seek out new swords and after besting Yoshinaka’s men in the swordmaker village they realize they have to travel into a magical forest to get magical swords. Well, why didn’t you guys just go there in the first place? The whole next part of the movie is basically Kai coming to terms with his foster parents, which are ethereal bird creatures that grant Matrix like…err…transdimensional movement. The coolest characters in this film appear on the posters but are surprisingly not really in the film.

Again, if we remember where we are in the story, 47 Ronin is about vengeance and restoration of honor. 47 Ronin, as of now, is about going into a ghost forest and having Oishi pranked on by the other bird wizards. The whole reason why they came to this place was to get magical swords but really Kai is the only one that can use it to its full potential. Well, why did we have to go all the way here then. It is feudal Japan. I am sure that swords grow on trees here. The largest disappointment in this part is the potential for Kai to lean against the themes of abandonment as a mirror to the rest of the 47. Even the bird parents make sense as progenitors of a unique warrior whose talents further ostracized him in a time and place that values honor over might. Nope, what we get is CGI nonsense and matrix movement.

I feel it is important to mention that I do not care about the addition of fantasy elements in the original story. Much like the Hobbit, I feel that film adaptations can be interesting on their own rather than as just an adaptation of source material. The legend of the 47 has already been changed and the original events are sort of grim and non fantastic. In fact, it sort of casts all characters as neutral parties with a distribution of equal blame. The setting of quasi fantasy makes the film interesting when it is used as accents rather than engines. Almost halfway through the movie the rest of the ronin are allowed to do something and their first attempt ends in an ambush. Fuck. But these swords. How did we lose? Fucking bird wizards.

Spoiler alert, the entire movie is based around the ending scene. Yep, you heard it, one scene which Kai, Oishi, and the rest of the ronin sneak into Yoshinaka’s palace dressed as Kabuki performers. The ronin used Yoshinaka’s marriage to the helpless Mika as a distraction to gain tactical advantage. The film picks up at the end with the 47 fighting an entire palace of guards…still…without…magical…swords. Come on. Tell me why we went into that forest again? Fear not though as the magical sword does aid Kai in defeating the dragon witch. On the other end, Oishi and Yoshinaka settle their differences with the edge of a knife. Not a magical sword. Goddamn it.

47 Ronin tumbles downstream so much that one is left to wonder how they will conclude it. The original story had not so great of an ending, the viewer is almost convinced the Shogun will just laugh off the whole thing and throw a party for the ronin because Yoshinaka was a dick anyway. The film, luckily, does not spare historical events and depicts a climactic finale that ends in mass ritual suicide. It is a very strange end to a very strange film which, like its protagonists, ends the story in the most honorable way possible. I feel that even listing my possible changes for the film, like setting the entire dialogue in Japanese so that Kai stumbles his way through his lines, further reinforcing the alienation of his character, is now cast in hindsight to this ending. Again, to my wife, who was entertained during this entire film: I am sorry honey but this film could have been something wonderful, fulfilling, and filled with much neglected magical swords.

Note from Mrs. Carbon: Do not care, it had a dragon.