The Wonder of Real: The Work of Donato Giancola 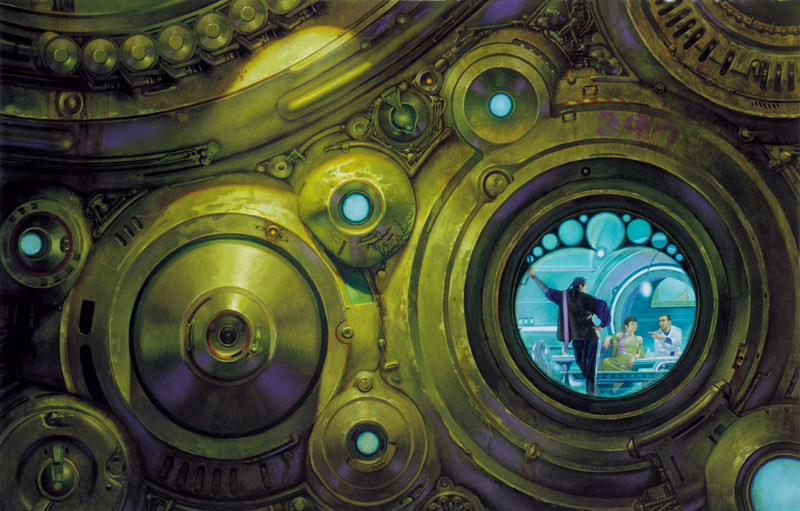 It is strange talking about realism when it comes to fantasy art. Realism means many different things as it could be related to the qualities of the picture, the subjects of the painting, the idealization of those subjects, or a melange of all of those things. The realism of Jan Van Eyck is different than Jean-François Millet as it is different to Chuck Close. When we talk about the Real we discuss many things that may not be related. Realism, for many, discusses and expresses how things are portrayed and for many, especially outside of the fine arts world, is a raw measure of talent and discipline. Realism for many historians discusses the desire to portray subjects without any sort of idealization. This is what makes Donato Giancola so interesting as he displays all of the markings of a fine realist painter combined with a far out imagination and love for fantasy. His idealization for the subject and surroundings are married with stunning detail fitting of classical work. Giancola, who is still working and very much living, has worked for a variety of clients and very much, like his paintings, stretches a great chasm between the fine arts world and the wild basement of fantasy art. From Magic The Gathering illustrations, to covers for TOR science fiction novels to historical paintings opening in fine galleries, Giancola seems to be the artist which lives not in two worlds but that great oasis between the real and the fantastic. Even more so than conteporaries like Frank Frazetta or Boris Vallejo & Julie Bell, Giancola’s eye and detail marks the academic attention of a realist. This work allows his illustrations for material like Tolkien’s lord of the Rings even more illuminating as it is immersive and astounding. This scene from Lord of the Rings is interesting in a contemporary framwrok on how we view large scale media pieces. This scene depicts the flight and fight in Balin’s Tomb within Moria with Gandalf, Aragorn, and Frodo depicted in various states of stress. According to the artist’s website

The physical battle in Balin’s Tomb in Moria, however, is secondary to the psychological conflict over the ring. Frodo struggles as much within himself as between external forces. As a weary, defeated figure we see his hand reaching out to the highlighted ring while another dark, groping hand echoes his gesture. That shadowy ambiguous hand might represent Sauron, Gollum or even what Frodo himself could become.

The classical treatment of the subject matter is in which the same way an artist would talk about a historical subject or a photographer would frame a moment. Pictures tell stories and this one is intriguing as it came out before the image of Frodo, Aragorn, and Galdalf were populated by the Peter Jackson adaptations. While there is nothing wrong with cinematic representations filling ones mind in place of constructed imagination, it is always interesting to see the depictions without that popular mindset. Here in this painting, we can see the vision of the characters before the films which perhaps mostly populated the minds of readers. A large set of Giancola’s work can be found on the varying book covers for wonder filled stories. The work of artists as illustrators for books has always struck me as a fascinating format for viewing artwork. On the one hand you have the duty of illustrating the content of the material while also pulling in interest with a cover to even showcasing ones own style. From real to stylized to abstract to realistic, fantasy covers have always been a good source for artwork which is sometimes glanced at only for a second but still serves its purpose. Giancola has graced the covers / media for many speculative greats including George RR Martin, Larry Niven, L.E. Modesitt, Jr., Robert Jordan, and of course J.R.R Tolkien. Fantasy illustration has always seemed to be halve client-artist work and half striving to illustrate the the founders of modern fantasy. Below are some more of my favorites from Giancola with the selection from both fantasy, science fiction, and non speculative history.