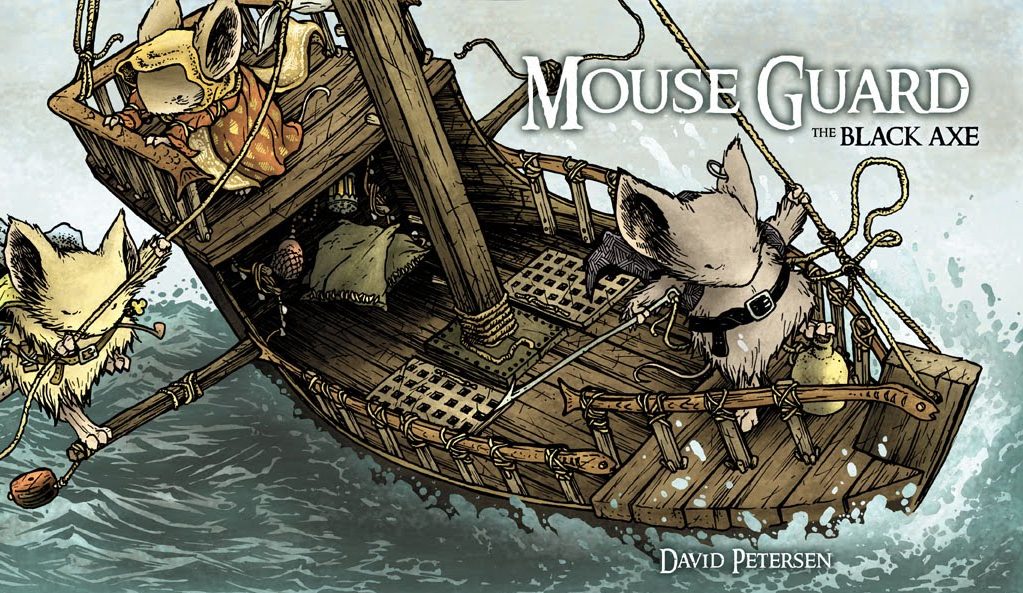 This is a review of the third volume in David Petersen’s Mouse Guard. It also may be a possible summary and introduction for others not familiar with one of the more interesting fantasy comics in recent years. If one hasn’t read this story, stop here and go out and read it. I am going to be discussing the plot of the story and wouldn’t want to ruin anything for you. On the surface, Mouse Guard is a simple story of medieval life and warfare just on a tiny scale with mice as its protagonists. In fact, the whole production sounds like an old forgotten Disney cartoon. Underneath this innocuous surface however, Mouse Guard offers a deceptively dense world where life, death, and the toil of culture exists in the space of probably a large backyard.

Mouse Guard Fall 1152 and Winter 1152 collectively focus on the stories surrounding a brotherhood of mouse knights who once acted as royal protectors to a territory of villages and towns. Following the war with the Weasel in 1149, the Mouse Guard now has been relieved to act as scouts, bodyguards, and other various, less glamorous roles. Despite the subtle dismantling of the Mouse Guard, its few members, Saxon, Kenzie, and Lieam still carry their role out with small yet strong honor. Fall 1152 recounts the brotherhood uncovering and overcoming an uprising of local mice lead by the Mouse Guard’s blacksmith Midnight. The Black Axe, simultaneously a weapon, person, and legend, is introduced early as a mythic warrior who brought peace to mouse kind. The legacy of the Black Axe is now being carried on by Midnight as a revolutionary extremist cell. Celanawe, the original black axe, is sought after by the guard to aid in the quelling of the revolt. The anti-guard revolt is eventually subdued during a decisive battle at Lockhaven, the territories capital, and ends with Midnight being banished from the mouse territories and order being restored. For anyone interested, this is a pinup done by Mike Mignola of Hellboy fame. What, no one is interested? Fine.

Environmental conditions and realistic boundaries exist within Mouse Guard as its second volume details the struggle for supplies in the heart of winter. Gwendolyn, the territories unofficial leader is attempting to unite the territories as well as seek aid to supply the town with much needed goods. The second volume echoes the first as Midnight has now become a martyr and his ideals of a totalitarian mouse state are carried on through his followers, which leads to the sabotage of Lockhaven’s water supply. Winter 1152 does not have a clean ending like the previous volume. Lieam succeeds Celanawe as the next Black Axe following a fatal encounter with a wood owl and the traitor Abigail. The only conclusion to this volume, however, sees Celanawe rightfully buried and Lieam leaving the Guard in search of his newfound destiny.

The first two volumes of Mouse Guard start a wonderful narrative that ends unresolved. The creators put out a one shot epilogue titled Spring 1153, which details the struggle against spring predators following the events of Winter 1152. The anticipation is further intensified as all future work on Mouse Guard is centered around the events prior to the first two volumes. Currently Peterson is working on the 1149 war with the weasels, which will make up the fourth book. The third book, however, goes back even further concerning itself with the history of Celanawe and his first encounter with the axe. The Black Axe’s legend is extrapolated further as the product of a forlorn blacksmith named Farrer in 915 and passed down through generations. The disappearance of the Black Axe in 1050 begins the narrative as Em, one of Farrers descents, seeks out Celanawe, the other descent, to find the missing weapon. The two travel with a third companion, Conrad, beyond the Northern sea to last known location, which also happens to be a ferret kingdom. I am really not joking about the level of detail. These are the eleven exemplary matriarchs, a series of stained glass depicting great female mice of past generations that lay on the inside of the Lockhaven private chamber.

The Black Axe is a mixture of surface narrative, with Celanawe traveling into the briars to slay a troublesome fox, and a heavy dose of lore concerning the lineage of the sought after weapon. Conrad, introduced in the series first volume and a one legged mouse, is given a reasonable backstory as a scorned pirate who, after the journeys end, consumes himself with hatred and drink. The scope of the world beyond the mouse territories is developed as well, including the ferret kingdom on the isle of Ildur. The level of detail and passing mention to rich stories are all hallmarks of this developing story. Following the demise of Em by the hands of a court ferret, Celanawe and Conrad return to their homeland seeking answers and retribution. Celanawe’s fall from mouse society begins after returning to find his love dead and his name stricken from the court records. Upon discovering a secret mouse society dedicated to the preservation of the Axe, Celanawe seeks out Conrad as new bearer for the Axe. Conrad turns unreliable and violent leading to, what Conrad thinks, is the death of Celanawe via plummet from a cliff. Celanawe’s new role as Axe bearer, free of the roles of mouse society begins, as he wanders the tiny world in solitude.

The Black Axe storyline further cements the Mouse Guard story as on not revolving around any one person but rather an object. Furthermore the Black axe takes on the role Excalibur did as not only a tool of destruction but an ideal that is wielded by its handlers. The struggle for survival in the frontier of the wilderness is forged in the fires of heartache, perseverance, and friendship. These large concepts are delicately portrayed in what seems like cute and fuzzy little creatures. Peterson’s details in each of the towns and history make up the largest draw for Mouse Guard. His work, inspired by books like Dinotopia, Redwall, and comics series Mice Templar is an exquisite immersion in a world that could exist unseen in any fantasy novel. The epic size of its story contrasted with its actual scale is marvelous and Mouse Guard stands as one of the most interesting stories still being made today. The third volume of the story may seem like a momentary pause with the main narrative but The Black Axe turns out to be an accelerator for all future stories. It stresses the importance and responsibility of this weapon and its now new bearer, Lieam, who is preparing to be the chosen hero for future stories. 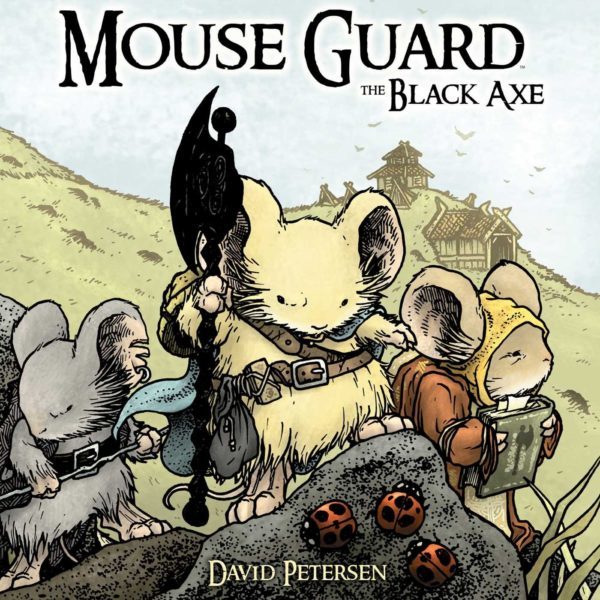