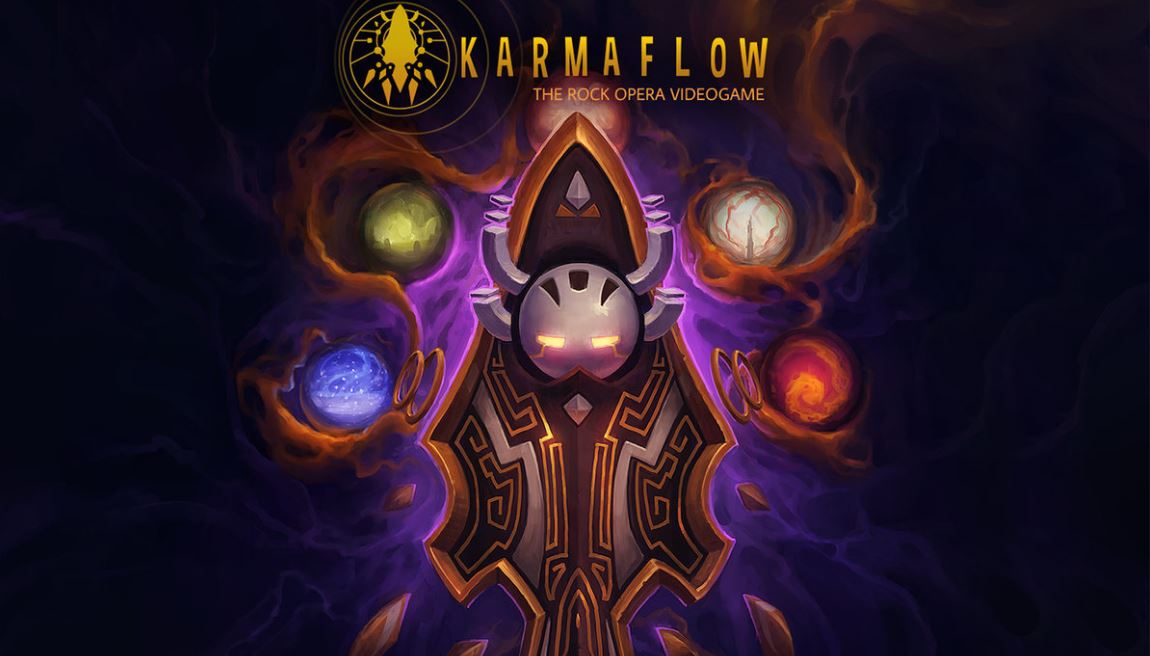 “There exists, for everyone, a sentence – a series of words – that has the power to destroy you. Another sentence exists, another series of words, that could heal you. If you’re lucky you will get the second, but you can be certain of getting the first.”

I don’t often start articles by pretentiously quoting Philip K Dick, but when Karmaflow hit Kickstarter last year promising “an epic fantasy rock opera” I finally knew what Dick was talking about when he alerted me to the verbal trigger to the bomb implanted in my spine. It’s that series of words, “an epic fantasy rock opera” that deactivates the bomb, by the way. The password that destroys me is the same sentence, but with three extra words: “But it sucks”.

From the moment I started, I wanted to like it. Sometimes I did, especially musically. The vocals are predictably awesome, if lyrically a little ropey in places with some frankly baffling pacing. It might be a unusual complaint, but the emphasis often falls just before or after where it should, leaving you with stuff like “I’ll always be WIIIIIIIIIITH you!” and “There once was AAAAAAAAAAA time, and AAAAAAAAAAAAAA place”. It’s a waste of talent and impact, for starters, and I’m more confused than disappointed. It’s not like this game was exactly short of musical talent, but while there’s definitely some serious skill involved, it’s not exactly well used. The Conductior, Voiced my mark hudson, is basically a elven Eddie riggs, and one of the best things in this game.

What it’s short of, sadly, is game making talent. While it might be called an “adventure” in the same fuzzy way that everything involving exploring an environment can be, it’s more a poor puzzle game that uses brief bursts of music as rewards, which feels like a major cop-out. Despite calling itself a rock-opera, the music is something you have almost nothing to do with. Rather than taking the opportunity to meaningfully involve the player character with the subject of the game, instead you spend the game fetch-questing the world to rights and listening to other characters have meaningful epic moments. You’re not totally powerless. At certain points you get the choice to empower or de-power certain things that change the course of the story, but they’re times in such a way that all you’re really picking between is how the real stars finish their finale songs. It’s interesting, and I found myself letting evil win just to see what it sounded like, but there’s not enough of the enjoyable stuff to justify the hour or so you just spent wandering through a mire. Really all you do is distribute karma in the form of little yellow balls, but the game takes a few worlds before karma starts getting rare and often the exact amount you need is available where you need it with more on the way, meaning over the course of the game you’ll build up a reserve, and then all that’s left is figuring out where you need to go.

That’s not easy, either. A combination of short draw distance (or, as they say in the industry “atmospheric mist”) and some truly awful map design means you’ll spend far too long trying to figure out which direction you’re meant to be going. Even in the more linear sections this is a problem because of how confusing the mapping is, and the frequent lack of any landmarks.

You might think a giant stone head would constitute a pretty compelling landmark, but when you walked over three to get here it loses some of its impact, and it’s easy to find yourself going in circles.

Apparently life as a sapient bolder is better than you’d think.
That, or some fucker just carved that in there.

All of this couldn’t stop me wanting to play the game. Despite the mechanical issues, I found myself powering through, curious to see what would happen next. Not for the plot, exactly, but the artistry. It’s clearly a music experience first and a game second, but after coming back to it I found a collection of “asset missing” messages, an audio glitch and myself teleported behind a puzzle I’d already cleared, now impassable, the only fix being to start again.

So I gave up. I didn’t want to, I wanted to play it, but when a game fights you so hard on every level to keep you from enjoying it, there’s only so much you can resist. It’s a fucking shame because of how much potential the idea behind it had, but this feels like a concept piece, an early access with some fairly significant systems missing. Trying to pass itself off as a full game is a disservice, both to the talent involved and its players.

Patching will most likely clear up the glitches eventually, but it would take more than that to clear up the reason I quit: overlong, uninspired game design with too little of the good stuff. If you think you can push through that though, the music just might make it worth it.