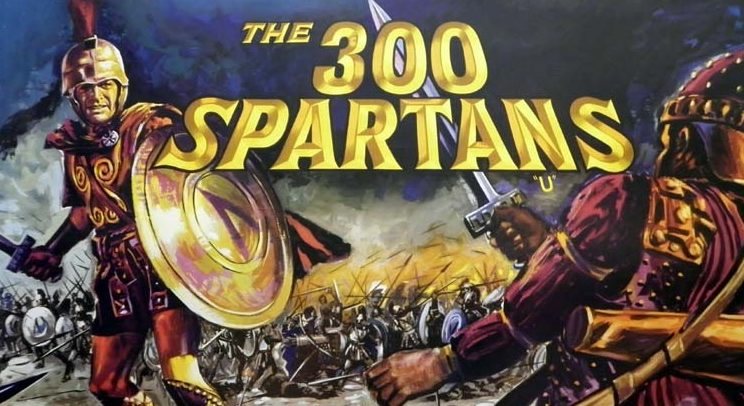 If you were around in 2007, you might remember a colossal film called 300. It was pretty popular. 300, directed by Zack Snyder, popularized the Battle of Thermopylae to a new generation of moviegoers as well as giving other films creative license to overuse CGI in their action. If you were not aware of the 1962 film The 300 Spartans, which basically covered the same narrative, do not fret as the older film has been relegated to the dusty shelves of history. Whether overshadowed by Ben Hur released 3 years earlier or the 2007 adaptation of the same source material, there seems to be only enough room for the telling of the tale of brave Spartans and maybe some other guys too.

For anyone who is really confused about everything let us quickly go over something that happened in 480 BCE. After his father was defeated at the battle of Marathon 10 years prior, Persian king Xerxes attempts to sweep through Greece and expand his growing empire. What is stopping his massive army is a chokepoint through at the Pass of Thermopylae now occupied by a small but formidable army. The group of Greek soldiers held the lines at what was known as “The Hot Gates” and caused Xerxes a great deal of trouble before eventually killing all of the Greeks. The battle represented one of the continuing downfalls that would herald Xerxes eventual overall defeat.

The Battle of Thermopylae, which has roots in historical fact, has become legendary for its narrative on heroism and staunch convictions in the face of overwhelming odds. The 300 spartan soldiers fought with 700 Thespians and 400 Thebans but those others sometimes get washed out for the glory of a lone spartan victory. The adversary was said to number anywhere from 100,000 to a million but then again ancient history is sort weird in dealing with actual facts. The narrative usually deals with 300 Spartans against an army of colossal size. The battle has immortalized the Spartans and their leader King Leonidas for their fidelity to duty and fearlessness in the face of certain death and the Persians as an opulent empire who relied on numbers rather than heart. This intersection between fact and myth is woven into the fabric of this story and is cinematic enough in story and almost begs to be made into a story. The 1962 film maybe though of as a warm up. I do not want to get down on The 300 Spartans because I enjoyed the experience immensely. Director Rudolph Maté had a long list of accolades before this film including the sci fi epic When Worlds Collide and the film noir classic D.O.A. The 300 Spartans would one of Maté’s last films before his death and also represent a world of adventure films that absorbed his final directorial days. Maté wrangles the talent of Richard Egan and David Ferrar as well as Ralph Richardson (who later played a wizard in 1981’s Dragonslayer.) The 300 Spartans has Richard Egan at his best with King Leonidas perhaps the most intriguing part of the film. Rough and formidable, Egan showcases a fair and loving interior which is shelled in the classic laconic exterior. Egan’s Leonidas is calm and seems to enjoy life despite the possibility of death at every corner. Egan’s portrayal is perhaps the one aspect which is on par compared to the 2007 film as he shows more humanity than Gerard Butler’s constant howling.

If one takes anything away from this review let it be the fact that The 300 Spartans is a better film historically while 300 is a better film visually. Despite any discussions on use of CGI, 300 was thrilling to watch and still to this day has fight scenes that are still impressive and scenery which is still dazzling. This aspect is lost on The 300 Spartans as its sets are sparse, its costuming looks cheap, and the use of space, while impressive with its 5,000 extras, appears stretched thing across the country side. This is to say nothing of the fight scenes which appear like large scale reenactments conducted by enthusiasts. What The 300 Spartans does have are better handles on characters and historical fact.Xerxes is flanked by Queen Artemisia, his generals are spoken by name. Leonidas gets the same treatment with historical personal filling his ranks. Demaratus, the exiled Spartan King now on the side of Xerxes also plays an important role in the film as a voice of impending doom for Xerxes arrogance. For that The 300 Spartans triumphs as a faithful adaptation that unfortunately is sort of a chore to watch.

The concept of the epic film is something that dates actual film making but has been come to denote a certain style of movie. This style is very easy to identify in contemporary times but was also easy to spot in the 40’s -60’s The Ten Commandments and the already mentioned Ben Hur are monuments in epic film making but also leave a legacy where other smaller productions pale in comparison. The 300 Spartans is a fun film to watch if not just for comparison with its modern counterpart. If anything the way we are entertained has changed drastically and the amount of violence on screen is remarkable.