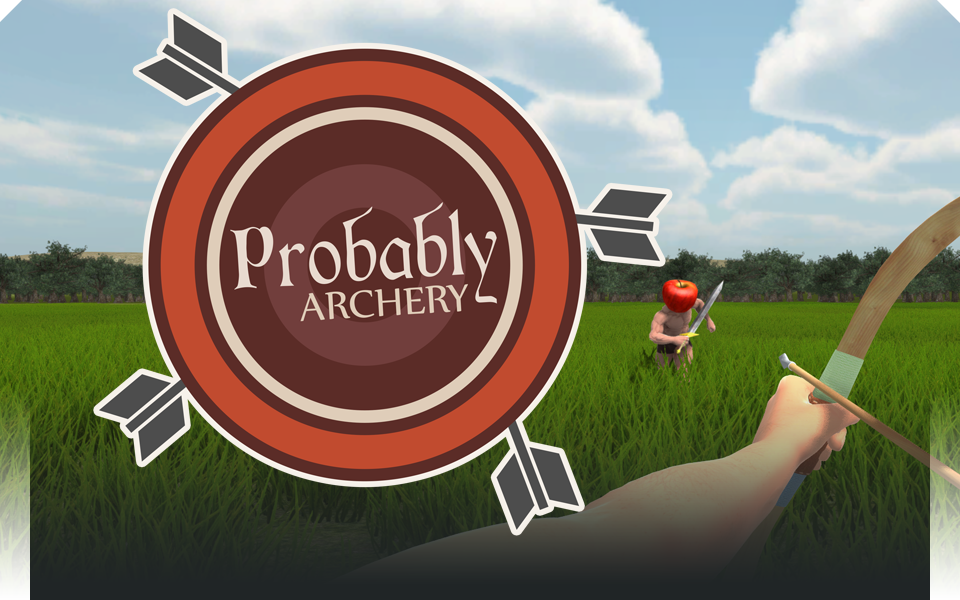 When you stop to think about it, it’s rare to see a game about archery. There’s enough games about archers to drown a damn wyvern, of course, but this is pretty much the first I’ve ever heard of that’s about actual archery.

If you’ll permit me to get technical for a moment, the difference comes down to agency. Most of the time the bow is simply a medieval replacement for the rifle. A mid-to-long range weapon that, besides the brief wind-up that they typically require, is just there to let you snipe buggers across gullies and on the tops of towers because, if you’re the average big name game developer, the creative part of your brain has withered to the point where the only solution to the eventual tedium of sword murder is murder with a different weapon. A lot of the time big name adventure games (watch my middle finger, RYSE) play like puzzle platformers where the only solution is “Sharp implement-Spleen”. Even usually inventive games like Skyrim just use them as a kind of shitty gun: you point the thing and click. There’s no a real skill progression, either. You start off able to reliably nail a mouse across a room and finish able to pick ticks off of a giant’s head at a thousand paces, which might be impressive, but if you’re not trying to pull a William Tell there’s little practical difference to the weapon functions, just the numbers you get out of it. And at no point do you as a player have to get any better. (Actually, in Skyrim at high levels the game starts correcting for you, changing trajectory to help you hit what it thinks the target is. Which can be fucking disastrous to your aim after you’ve spent hours practising without it). When describing most of these games, especially combat oriented ones, you invariably start with the phrase “you control a dude…” and I don’t think I’m alone in being bored of that. At this point a lesser journalist might try for drug humour, but thankfully my arms crawled out of my nose and blue away before I could.

Probably archery then is a fucking godsend. Here you don’t control a dude, you control a pair of fucking arms. It’s the Surgeon Sim of putting bits of sharpened wood into things. And that’s awesome. You might recognise “arms” as the same setup 99% of real world archers use, and as such it’s a totally different tier of difficulty to the bullshit “point and fire” method that’s common in games. (Although if you think arms are a requirement to be a badass archer you might want to keep that to yourself, lest world record holder Matt Stutzman fuck you up at 200 meters. While aiming with his teeth). With these arms, you’ve got a bow and a infinite supply of arrows. Mouse movement alone controls the wrists, while Q and E change control to the elbow and shoulder, respectively. And shift, predictably, shifts control to the other arm. Which, of course, means you’ll spend a couple of hours delicately slotting arrows while wiggling your arms about like a newborn. Just like a real archer. Thankfully there’s a practice mode to allow for the constant fuck-ups, but once lunatic applebarians start screaming, there’s a good chance you’ll forget everything and just start throwing arrows about like a fucking lunatic. And then you’ll die. Behold the face of screaming, pomaceous death. (now with even more pips)

There’s a kind of thrilling joy to be had, slowly and awkwardly notching an arrow while a huge, burly guy with a head made of apple sprints headlong toward you, screaming and brandishing a longsword. Which I just realised doesn’t make any sense, the total lack of mouths that you tend see in the common, non-eldrich apple. Which is a testament to how fucking terrifying they are, really. With these bastards running towards you there’s not much time to wonder at anatomy. Multiply this by the game mode variety they manage to pull out of “shooting arrows at stuff” and you’ve got a game that does as much as possible with just one mechanic. Horde mode? Check. Horde mode where you command a legion of archers? Check. Horde mode in the vacuum of space? Check? On top of that there’s a mode about firing arrows at a flying egg in a china shop, if you’re the kind of person who wants to live inside of a Salvador Dali painting. And then there’s a whole bunch of multiplayer modes too.

There’s a problem though, with games like this, and that problem is replayability. Because it’s so shallow, with the only real challenge being “master the bow”, that once you can reliably use the thing there’s really no reason to keep playing. The whole fun of the game is about how terrible at it you are, and once you’re past that there’s little worth sticking around for. Don’t get me wrong, for the price it’s a decent distraction and you’ll get plenty of hours of gleeful incompetence out of it. But once that’s over you’ll notice that each mission is only worth completing once. Then you’ll probably go outside or something (which, if I were a gambling man, I’d bet is going to be the title of their next game).