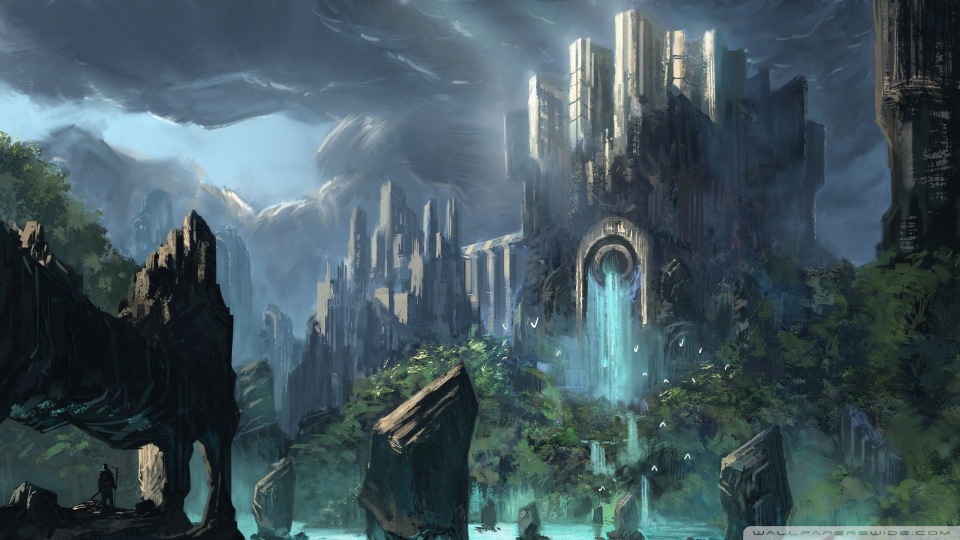 I find myself fortunate to be here and now within the dungeon synth community as I can see things working at an observable pace. The Facebook group for dungeon synth community has been an invaluable tool not only for seeing people’s projects posted but also to see the growth of fledgling artists into reliable makers of the style. Within the small microcosm of a 745 member group, one can get a sense of a strange community between people who have banded together under one weird flag. The glimmers of support and collaborations between the musicians, visual artists, new arrivals, and veterans is fascinating to watch. In a style that is largely digital in construction and dissemination, the web of collaborators and conspirators is growing and one gets a sense that this small little kingdom will be much larger one day. The internet is usually the last place one would look for support and optimism within a scene but in a style that is mostly digital in construction and dissemination with an international base, the state of the union seems to be in tact and pretty optimistic. I am sure things will change one day but for now it is oddly fine.

I do not like to double up on artists despite some dungeon synth musicians releasing multiple albums within a year…or month. Thangorodrim released a wonderful two song release earlier this year and later on cassette from Out of Season called Towers of the Teeth. I am thankful, I saved my one chance to write about Thangorodrim until now as Taur-Nu-Fuin is perhaps one of the better releases in recent memory. In terms of style, devotion to the spirit of early DS, and presentation,. Thangorodrim has made a ruminating display of both dark emotions and wonder which can easily fit into a highlight reel for the year.

Nocht does not look like a dungeon synth artist nor does Earthcaller look like it would be a dungeon synth record. It is, despite its graphic design, Where one would expect black/sludge, stoner doom, or even some progressive thrash, inside the greens and purples of the album cover lies some well constructed and contemplative keyboard melodies. At a release nearing an hour running time, Nochty is a record which is hiding under an unassuming album cover. Watch for traps.

Silent Cabin is strange. Silent Cabin is more dark ambient is dungeon synth as sort of an afterthought. Forgotten in a Cold Forest and Lonely Mountains are two releases for May of 2016 which feature the sound of meditative keyboard drone. Though Forgotten in a Cold Forest is featured on here, the releases actually work the best when starting with this and working ones way into the longer second release. I say this all with knowing that the first few tracks of this release are not assuring but given patience, this short release opens up into a wondrous and mystic pleasure.

[Editor’s Note: the original link was taken down so it’s be replaced with the band’s 2016 release: Lorac’s Folly]

Verminaard is new and full of life. Via the Facebook community, this artist has been eager in contributing and seeking help. I was surprised to see his post on this record as just before he was asking about tape manufacturers. Creators are hiding in the shadows ready to step out at any moment. Wardens of a Light-Starved Realm is charming as it is a warm blanket which embraces the sound and style of dungeon synth to the point that it feels classic and comforting. Though the keyboard tones sometimes feel flat, the pace and variety of songs make Verminaard the kid raising his hand in the back at every single question. The enthusiasm in this record infectious and I can’t help but smile.

Moaning Shadows is a dungeon synth act but the music is styled after the soundtracks of CRPGs and late 80’s console games. Alright, I understand. This maybe not what you are into or so comical that it maybe difficult to fully enjoy. You may want to move on but I know a few others will be staying. To be honest this is the way I first felt but after a few songs of Spirits of the Past, the sound became fun and enjoyable. I imagine wandering around a world map in 8 bit and a pixilated menu screen guiding my adventures. Additionally, for an EP, the track running time is quite serviceable with a future physical release containing 5 more songs. That is a deal for a style that fuses chiptune and dungeon synth and provides a theoretical soundtrack to a game that never existed but would be amazing if it did.