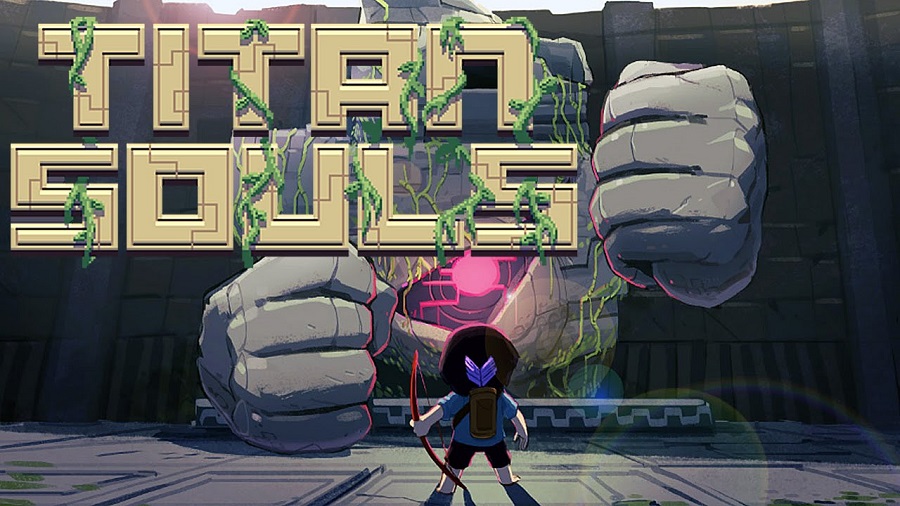 Created in just 72 hours, Titan Souls is a masterpiece that harks back, pretty strongly, to the (and I’m being modest here) GREATEST VIDEOGAME EVER MADE. It was called Shadow of the Colossus, released on the PS2 (recently re-released on the PS3 in glorious if unnecessary HD) and was, as I may have mentioned, THE GREATEST VIDEOGAME EVER MADE. It was about a little guy with a bow and a sword, wandering a humongous and deserted landscape, and killing the 16 colossi that lived there. As artistic as it was fantastic, that game was as much about riding your horse through a lonely and increasingly barren land that it was about murdering ancient beasts. And then reflecting on your actions, MURDERER.

It was a game I enjoyed so much I bought two copies, just in case I lost one. I’ve still got them both Finally, a boss with a giant glowing weakspot who’s smart enough to put his hand over it.

I was pretty much fated to enjoy Titan Souls, then.

The only real difference, aside from the new 2d and the brilliantly pixelated art style, is the brevity of it all. You’ll die in an instant, and your only respite from crushing terror is the long trek back to the titan’s cave. In Titans Souls death is frequent but fair, and remarkably cheap.

It’s a product of the 28th “ludum dare”, a three day game jam in based on a single sentence premise. “You only get one” was this time’s mantra, and it shows. One hit kills you, one hit (on their weak spot) kills them, and most challengingly of all, only one arrow. If you miss, you can summon it back to you but that involves standing still, and in this game, standing still is inviting a great and terrible brain, frozen in ice, to grind you into mulch for no rasin.

It’s pretty lucky then than you can dodge-roll like a motherfucker. Am I gnome sized? A man? A fucking giant? All these questions and more never ever get answered.

Typically here’s where I’d comment on price, try to give some insight into whether or not you get a decent bit of value for your money, but this one’s free. And there’s a browser version, if you’re planning on playing it while Sue from accounting waits for your quarterly reports or whatever. (As far as my experience goes, a desk job is an expression of sexual love between a consenting adult and an Ikea office furniture set – I nearly described the consenting adult as a “sufferer of object sexuality” until I realised the only way you could truly suffer from object sexuality is splinters).

There are only four titans in this world, and between them they make up every living thing in the world. It’s a kind of beautifully sparse experience, and in keeping with the kind of short, punchy feeling that makes a game like this meaningful. The music’s light but ominous, with a beauty not dissimilar to hearing a bear roaring in the distance, round about that mountain I talked about. There’s the promise of pant spoiling terror, but for the moment it’s just something in the background, adding a little atmosphere to an empty world.

Thinking back to what I said earlier, perhaps it’s fitting that games like this, where you hunt a dwindling and magnificent population of wondrous beasts, are so rare and magnificent themselves. A certain type of person might say that that’s their charm, that some of their impossible magic might be lost if they became just another yearly franchise and that the only way to truly enjoy what they are is if they remain a rare pleasure.

That guy sounds like a fucking hipster though. I want more.

(Instead of a trailer, this week you get a link to the browser version of this game. Ain’t I generous)
Titan Souls