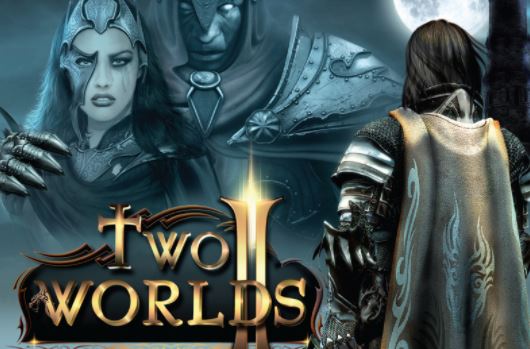 Normally, when reviewing a series, I’d start with the first game. So, Two Worlds 1 was the worst game I have ever played. There is literally nothing good to be said about it, we will forget it exists and move on. Two Worlds 2, on the other hand, isn’t actually that bad.

The storyline is nothing special, but it does enough to keep you going. You and your sister, Kyra, have been the prisoners of the emperor Gandohar for years. He has your sister because she is the vessel for the fire god Aziraal, and regularly takes some of that power for himself. He has you because the process isn’t perfect, and he needs you there to stabilize your sister, so she doesn’t die and release a very angry fire god. A band of Orcs attempt a daring rescue on the orders of their leader, known only as the prophet, because she has forseen that you are the key to defeating the emperor. What follows is you travelling to three different islands of deceptively large size, trying uncover any weakness that be used to kill Gandohar. There is little to no character development from any of the characters present, except Gandohar. The story is very much about him and his rise to power, which probably explains why he’s the only interesting character there. If I were you, I’d turn the voice volume down as well and just read the subtitles. The voice acting is horrendous, except for maybe Gandohar, which is just alright. It is some of the worst voice acting I’ve ever heard, and some of it seems like it was written by child. Not a very smart child either. In terms of visuals, its a mixed bag really. Character models look clunky and unrefined, like they should be on the PS2 or something. Faces are also bad, giving rise to some of the ugliest people in gaming. But that just made me laugh more than anything, especially when their hideous faces tried to convey some form of emotion. The weapon and armour designs are quite cool, stamping their own unique style on tried and tested equipment styles. Where they have done a great job, visually, is in their environments. When you escape from Gandohar’s castle you are teleported to the island the orcs are hiding on. And it looks nice. The trees are plentiful, making the forest look realistic, and the light shining through the leaves gives the whole environment a nice, pleasant feel. And it should. The next place you go to is barren desert, which also feels like it should, empty, and a bit dangerous.

Which brings us to the combat. Which is actually quite fun. When it works. It is simple stuff, left click to attack, right click to block. Special attacks and items are assigned to the number keys, and these change depending on whether you’re attacking or defending. Simple stuff really, but when you start using those specials, that’s when things happen that shouldn’t. For example, a stunning attack left my opponent locked in defence, so I could only kill him with the special block breaker attack. Enemies disappear through floors and walls if you hit them when they’re not ready, so these glitches aren’t all bad, but the fact that they’re still there, after the game has been out as long as it has, is ridiculous. But still strangely entertaining. And the sword play is nicely animated as well, especially in the cut-scenes. But the characters still look ugly, which detracts from it a little. Which is a shame really.

There is plenty of content to sink you’re teeth into. It took me a surprising 11 and a half hours to get off the first first island, and travel to the second, slightly smaller island, while the third island dominates much of the world map. There are a few side quests around, not like an elder scrolls game, but a respectable amount. It was these quests that took up most of my time, as you would expect. Some of them even have intersting stories. With terrible dialogue. An interesting thing to note is the strange difficulty curve. When you first set foot in the wilderness, ready to take on the world, you think to yourself ‘this is the first island, it’ll be easy’. You see a giant ant the distance and charge. And die horribly. The monsters start off a great many levels higher than you, and only until you’re about level 10 does exploration become reasonable. But that’s where another problem sets in. The enemies don’t get harder, so by the time you’ve left the first island, you were one hitting most of the enemies, and still getting a reasonable amount of experience for some reason. By the time you hit the second island, its too late. The monsters may have changed, but they aren’t strong enough either, and everything’s just too easy now. There isn’t much challenge any more. You’ll find the odd giant monster or special character on a quest that can survive two hits, but they aren’t a common occurrence, and so it gets boring after a while.

There isn’t much else to keep you there really. There’s gambling to do, and you can enhance your weapons and armour, but you can’t create your own. You can customize the colours on your armour, but you need paint pigments in your desired colour, and they don’t make much difference anyway. You can customize your character at the start, but your choices only range from ugly to the most hideous man ever. So there isn’t much to do outside of the too easy quests and passable storyline.

It will take some patience to get through it, but it might actually be worth it. It was an enjoyable experience, even with its many flaws, and I do mean many. The terrible voice acting, character models and dialogue, balanced by the nice environments and entertaining combat make it an experience not everyone will enjoy. Some people won’t be able to get past its flaws. Some people would rather just pick up Skyrim or Oblivion, its a similar experience, and both of those are better. But, if your looking for something a little different, give this a try, you might be surprised by what you find.