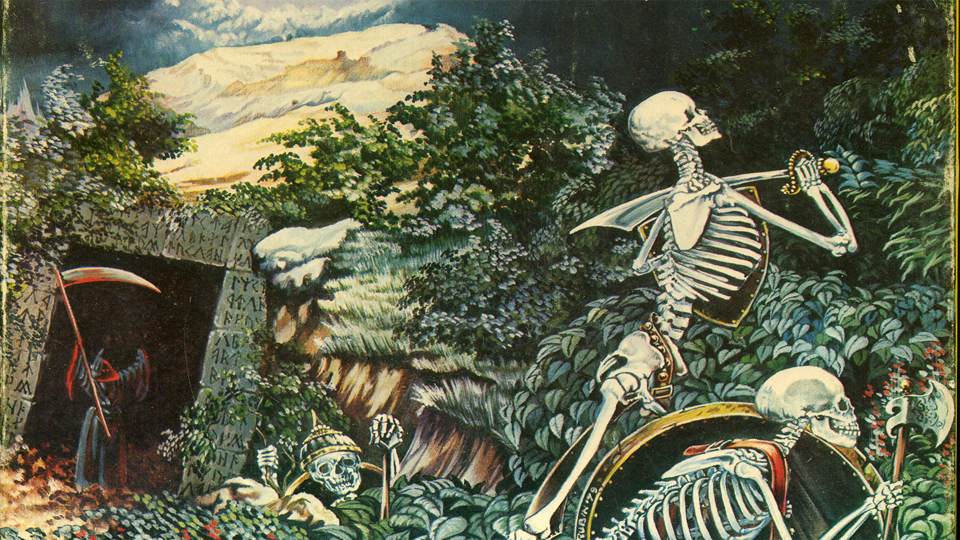 The Eventual Death of Dungeon Synth

I have been following dungeon synth for around two years cataloging its history and charting its progression as a microgenre in an age where microgenres have ephemeral existences. I have always professed a love for this style and its community of creators, recorders, and fans. Dungeon synth has existed for decades in various identities from strange black metal/dark ambient offshoot to an independent electronic genre with sometimes new connections unrelated to its past. Dungeon synth has existed before the age of the internet and in 2017 is still wrestling with its existence as an internet based genre. While continual exposure for this genre causes some discord among the community leading to splinter groups and spats of internal conflict, the resilience of dungeon synth, and an ultimate desire for worlds not our own, seems to be winning over the forces that conspire to destroy it and the novelties which wish to discredit it. I am sure one day there will be reasons to write “The Death of Dungeon Synth” as a eulogy for a style I once loved but that day doesn’t seem to be today. I will mark the decline of a genre when the amount of interesting and new work ceases to be made. Every month I am continually surprised by the amount traditional releases which explore the styles roots, the growing revamping of the sound’s new wave, as well as the wild experimentations which continue to challenge what we know and think of the genre. I will mark the death of dungeon synth, personally, when the style ceases to impress me as a sound and the community of weirdos ceases to be fascinating. I am glad the style is stronger than a Bandcamp article, or a popular Youtube channel, or even an influx of new creators. I count my blessings there are a dozen new releases I first have to enjoy before the eventual death of dungeon synth.

This month’s image comes from the “Tomb of Spells” figurine set from Grenadier Models. This Pennsylvania based company produced metal figurines during the late 70’s and actually released Tomb of Spells and Woodland Adventures which then caught the interest of TSR. The two started a short partnership which led to a plethora of figures made for both Dungeons and Dragons and Gammaworld. The hobby of miniatures is stupidly deep and is as big as the game itself. What I love about the image is its calling to the people who find roaming skeletons and a mysterious figure weilding a scythe to be enjoyable and a place where they could spend hours of the day lost in imagination.

There is certainly something to be said about the space between albums. As I said before in many articles, DS moves as an accelerated rate so the space between some albums is much shorter than other genres. This is why a year feels like an eternity between albums. The time spent listening to Barak Tor’s 2016 releases Wizards of Morcar and Silent Passages and Hidden Realms have allowed the mystic of Barak Tor to grow which in turn allowed March of the Triumphator was greeted enthusiastically by its fans. Grand in scope both musically and thematically, March of the Triumphator signals the fires of the old dark mountain to be lit once again. Time sometimes adds to the enjoyment of a record and this is certainly one of those moments.

ElixiR was one of my first tape purchases in the world of DS and has since been a staple of interest. I still have the decorative envelope that Moonlight on Black Castle came in sitting in my growing library. What this French based artist does is allow the listener to be transported to a magical realm that while very far away from the darkness of dungeons, is inhabited by various mystical creatures. Dreamy and arcane with shades of melancholy, Forgenoir is a welcome addition to my growing ElixiR library.

Much has been said about the topic of experimentation and the future of DS within that framework. While there is the certain and the direct, there are also others from Russia. RævJäger has mentioned several times that his release is not “pure” dungeon synth in the traditional defintion. While all RævJäger albums lack the darkness rhythm of the underworld, each one is increasingly forming its own world. These are places where fey and trickers gallop around in half delirium. I have always liked RævJäger’s releases and watching this artist grow from a goofy acolyte with 2015’s The Tale of Axe & Torch to a premiere creator with this latest release has been nothing but inspiring and entertaining.

DIM is a newcomer in the world of DS and by the gods, it looks like the debut is making quiet a splash. From the mystical font of the name to the album covers which show ancient and overgrown ruins, DIM offers melody and intrigue which can span a thousand generations. Compendium is a tremendous debut from an artist that, until most recently, was a complete mystery. Perhaps this is the part of joy that revolves around this style. Both competent musically and entrancing melodically, Compendium details a loose story of a wandering minstrel leaving familiar places for the embrace of the unfamiliar.

To be honest, I had this record already in the queue for review and now I am just reading who actually composed it. Rômulo has been a big source of inspiration in my personal journey into dungeon synth with not only the Masmorra Dungeon Synth Zine but also the Iami releases. Altar is not a strict dungeon synth record rather it takes the sound and mixes it with new age and dark ambient with a tribal theme to offer something incredibly unique and inspirational. Perhaps it is just the fate of this creator to keep doing different things which open new chapters for others.

I love demos. Even when they are less than quality they still have an air of fresh exuberance. Dusk by Forlorn Citadel does not fit into this category as the artists 2017 demo is of high quality but the sentiment still stays. Demos are a fantastic way to approach the world with a low stakes release that gauge interest. If you are this artist and your 2017 demo is a fantastic release which is better than most full lengths of the year, then you already have a good future lined up in front of you.

Who wants to get dark? I certainly do. Catacombs Enshadowed is made for fans of Lamentation and Early Mortiis according to the Bandcamp page. There has been a growing interest in the dark varieties of dungeon synth which sound like haunted castles, ruined landscapes and the hum of an unsettled cave. Catacombs Enshadowed speaks to that growing interest with a release that sounds like the procession of a ghostly court. Best used to contrast the regal delicacy of other releases, Curse of Dark Centuries certainly has the ability to turn the skies black forever.

Wow, this is certainly something. Hedge Wizard is interesting because aside from being my introduction into DS, 2014’s More True Than Time Thought is a nearly undisputed classic in the community. This was also Hedge Wizard’s last release until very recently. The Local Portal demo takes the idea of dungeon synth and adds in some prominent vocals which is reminiscent of darkwave and other more flamboyant experimentations from the 80’s and 90’s underground. Wether or not this release will stick like the debut has yet to be seen but regardless, this demo is certainly a giant step for the artist and certainly moves the clock forward for a style that is wrestling with its identity.

I reviewed an Ekthelion release in March of 2016. I am sure of it. That particular record has since been removed with Age of the Faceless Demon being the earliest release. I find it interesting that I can not find the name of the first release and whatever I enjoyed has since been erased from collected history. With all of that said, Ekthelion still manages to grab attention with keyboard driven atmosphere which dredges up the painful memories of DS’ past. Dark dungeons and medieval ambient hang around this release like memories of a love once lost.

Waeltaja is interesting and I am wondering why I never caught onto the 2016 release. I say this as the music on Autumnal Echoes is both mystical and near classic in its compositions. Reminiscent to acts like Abandoned Places, the minimalism employed by the artists is deafening with interest in the few droning sounds enough for a captivated audience.

I do not know what to say about this other than I am very intrigued. I have no idea who Llathasa is but Illusory Games is an Australian label/project that seems to host DS acts along side of power electronics, cold wave, and noise projects. All albums are given the same style of album covert which is near psychotic in its design. Entol is certainly an interesting cog in a machine that has yet to be identified.

Celebdi is certainly an artist that does not rest. Already in 2017, this Spanish artist has produced 6 releases which is already shaping up to beat Sequestered Keep’s track record in 2016. Just as would say that quantity does not dictate quality, I will also say quality does not dictate quantity and if there is an artist who moves at a faster rate than others so be it. Essence is certainly interesting for being the 6th record released in a year and charts the artist’s mental progression as they use songs as written notes hashing out ideas for an audience of few.

I think it is time to get weird. Lets get weird. Urchun is a Swiss artist who uses dungeon synth as one of the many vehicles to create a nightmarish landscapes of historical specters which floats around a vortex of madness. Somnus Reliquit details and devotes itself to the archaic and arcane prose of ancient Roman poets particularly their delve into dreams. It is a fascinating subject matter that is made ever more surreal with atonal dungeon synth.

Ransuer has been releasing records every year for the past 4 years. I first become aware of Ransuer’s music on the DS forum when the thread Dungeon Noise became a hot topic of conversation. There is certainly room for easy criticism for Ransuer’s music including the handdrawn covers to the intentional noise woven throughout the simple melodies. While this music is certainly not for everyone, these is an undeniable charm to this type of music even adding into it the fact this does sound like music made by goblins by a greasy fire in the dawn of some bleak morning.

One of dungeon synth’s most popular releases comes from an artist that doesn’t really do dungeon synth. Anthony Linell is the person behind Abdulla Rashim, a techno/ambient outfit supported by Northern Electronics. 2015’s A Shell of Speed was a brilliant exploration into electronic texture and ruminating soundscapes. Now Linell seems to be inspired probably due to the styles recent explosion in the “mainstream.” Consolidate is DS as art exhibit and does not really possess any concrete connections to the style rather minimal interpretations in expected fashion. While Linell’s album certainly fits into the other wave of experimentation its representation of the style it emulates is stretched out into three to ten conceptual steps.