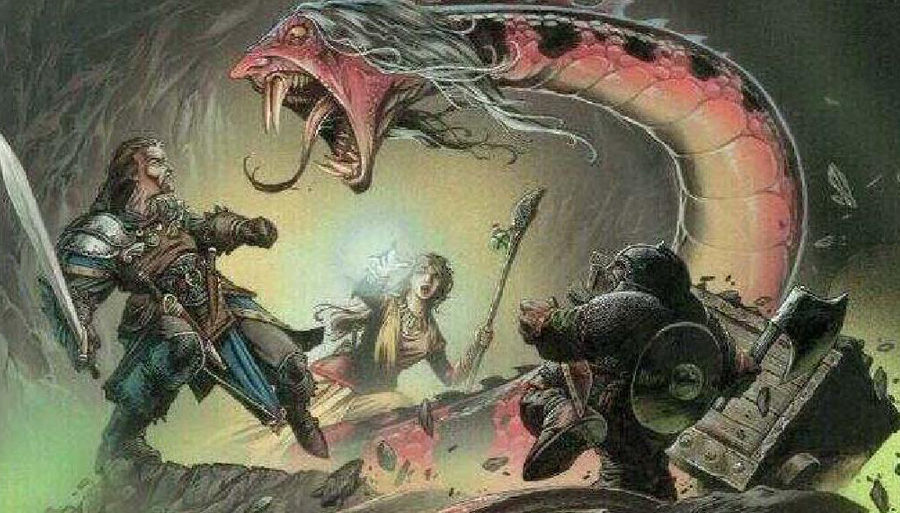 I usually use this space to discuss thoughts and reflections on the dungeon synth community. I also sometimtimes use this section to talk about artwork and / or role playing games. We shall certainly see which one is going to be discussed today.

Deep Dwarven Delve was the completion of a three module series written by Lenard Lakofka. His Lendore Isles series began in 1982 with L1 The Secret of Bone Hill and its sequel L2 The Assassins Knot in 1983. The manuscript for a third module was completed in 1979 but it took 20 years for L3 Deep Dwarven Delve to finally reach shelves. The artwork was done by Wayne Reynolds who would later become the artist for almost all of Pathfinder’s core material. In fact the gruff sword welding fighter on the cover looks like a prototype for Valeros, the iconic Pathfinder human fighter which would be on many of its material 10 years later. In any case, I will leave you now with some of the flavor readings from Deep Dwarven Delve and hop that the exciting proposal of mines stocked with treasure and adventure fits the music after.

As the dwarves carved ever deeper shafts following the vein of mithril, they broke through into a hidden chamber, one created far below the surface when the world was young. The shrine was dedicated to a powerful force of pure evil, the arch-devil Baalzebul. The arch-devil was cunningly twisted the allegiance of some of the miners who found his long-lost fane. Those under his influence concealed the breakthrough into Baalzebul’s shrine and began an insidious campaign to take control of the mining complex from within. The most powerful agent of Baalzebul was a cleric who was dissatisfied with his standing in the dwarven community and who sought to increase his power. With Baalzebul’s aid, this dwarf, Frelpic, constructed a powerful iron golem, supposedly to assist in the mining. Once the construct was fully animated, Baalzebul sent an evil spirit to possess the golem. In one long, bloody night, the entire dwarven force was murdered. Frelpic alone was allowed to live. However, the cleric was driven insane by his contact with the arch-devil and the role he played in the murder of his comrades.

When Khorliss Foesmiter investigated the Delve, the villains overcame him and his comrades. Following this encounter, Frelpic, the iron golem, two summoned devils loyal to Baalzebul, and a spirit naga residing in the Delve ensured that Baalzebul would have time to work his fell plans without further danger of discovery. Given no other orders by the wicked Baalzebul, Frelpic animated the corpses of many of his former companions and returned to the work of mining the mithril ore. Meanwhile, Baalzebul continued to expand his malign influence, using the chamber consecrated to him as a focus for his efforts. Although it has taken nearly twenty decades, the arch –
devil’s persistent call has finally attracted a suitable army of mortal followers: the humanoid forces that now control the upper level of the Delve. From this protected position, Baalzebul hopes to expand his sphere of control across the entire region—a disaster of unmitigated proportions for all life nearby.

What do you do?

If you have been around the dungeon synth scene at all within the past few years then the name Thangorodrim is spoken with the same reverence as the old masters. This is why it should come as little surprise that the release of the project’s second full length was greeted with rousing excitement and also the selling out of the physical media within seconds. What is interesting about Thangorodrim’s success is how there is a general agreement between the majority of fans that this success is well earned and not in one bit over rated. The sounds of Gil-Estel, while not groundbreaking or new, fascinate its listener with classic emotion and gives a sense of hearing dungeon synth for the first time. Whether veteran or newcomer, Gil-Estel is certain to become a staple for the year and maybe for a long time after.

Maradon has impressed me in the past with its glacial moodiness with 2017’s Of Hope and Fading Glory. In Ages Lost continues the project as a dungeon synth dark horse making astounding music at the edge of recognition. If I was intrigued before by the debut of Maradon, then this new release does not but make me a fanatical prophet for a project everyone should hear. In Ages Lost echoes tragedy which sounds eons old.

The use of Tolkien is to be almost expected in dungeon synth. The use of less traveled Tolkien and to a level of knowledge that is fanatic is impressive. Narn i Chîn Húrin is devoted to the Children of Hurin which is the fourth book you read in a Tolkien binge depending on if you have the revised edition by Christopher Tolkien or are reading it from Unfinished Tales. If you are a madman then you read the poem version in the third volume of The History of Middle-earth. Whatever the case, the story revolves around Túrin Turambar who is the tragic champion of deeper Tolkien material and is exquisitely given a soundtrack by a deft musician.

My only criticism for this release is that the cover isn’t as inviting as this project’s debut. Ephemeral Landscapes short records offers the listener a chance to float on iridescent clouds under the cover of moonlight with delicate combination of ambient, dungeon synth, and what sounds like night songs of fairies. The second volume in this project does the exact same as the first just now with a cover that looks more experimental than dreamlike. These are only small criticisms for a project that has become endearing and close to my heart.

I believed I raved about the Russian artist Soltri earlier this year with the release of Cursed Kings. Since that time, it appears the artist has been hard at work making albums that sound like the lullabies of magical creatures inhabiting a dark forest. With feet both in light and darkness, the depths in which this new release goes is astounding. Centered around the plights of King Arthur, Soltri dedicated itself to fantasies of the old world and the sounds that lie within.

I usually do not like to do compilations but this one seems of particular interest. Taur Nu Fuin was featured on the second Dungeon Synth Compilation but not even I was aware of how far back this project reached. Íonacht is a compilation of material made between 1999 and 2004. This is fascinating since it predates the new wave of dungeon synth and showcases the sound back in a primal entirely underground state. While the music is melodies and interesting, the rough production gives the music a rustic textures which sounds like dark ambient music locked away in a forest hideaway.

It is sometimes difficult to wade through the releases from Evilnox and separate them between black metal, dark ambient, and dungeon synth. This is difficult since this Russian project has few qualms about mixing all of those genres to showcase his vision of a world cast in darkness. When Darkness Falls is a lengthy record with multiple songs offering multiple chances as escapades through fantastic worlds and exotic locations.

The sounds of Drochtuarach require patience. Dropping in on a streaming track you are not going to get the full sound of a medieval troupe gallivanting down the road. Vespers of Prideful Scorn requires one of sit down and listen to the gathering clouds which soon blot out the sun. Vespers of Prideful Scorn certainly tends towards the dark yet its dynamic composition gives way to wrestling with the light.

Oh, its Roman Master which means we have hit the weird section of our digest. Roman Master has been the source of great polarity as the projects brazenness and fanatical devoted by its robbed acolytes has caused a stir especially given the alien sounds of its releases. The Basilisk ratchets down the weirdness from the projects debut and presents a pretty well put together lo-fi dungeon synth adventure which sees monsters, tragedy, and dark adventure.

I really like this release and I know how odd it is. Taking all of the releases from this year, The Wizard Murcec is certainly an odd composer which makes dungeon synth that sounds like the boss level of a Playstation game. While the compositions are near epic, the processing through low tech gear gives it its distinctive texture. This is strange alchemy done under the cover of darkness in some hidden tower.

Eldest Gate’s Bandcamp picture always scares the shit out of me. This release may look like it is dungeon noise dark ambient but when given a chance past its dreary atmosphere is actually quite melodious in a depressing way. With the patience of a thousand years and the weight of the worlds sadness, Wayfarer makes music that are the bardic songs of the dead and lost.

Records this late in the digest usually tend towards the odd and strange. While Illusionment’s debut is melodic and sounds like it would fit in well with the public, fully experiencing the entirety of it is surreal. With all tracks in verbose titles beginning with E, the repeating melodies of each of the tracks gives an enchanting feel much like a wizard who is lost in daydreams and eventually wanders off in a fugue state. The fact all of these tracks are 3 minutes long makes me see this as a ritual of faery music rather than something that should be listened to without caution.

Dungeon noise has been something of bizarre fascination for me and the creator behind Tyrannus and various projects a obsessive fanaticism. Perhaps it is my interest in seeing the shaping of the fringe with experiments. Black Sun supposedly represents a new direction for the artist with a record of harsh noise that is moved by the plodding sounds of dungeon synth. This is no longer dungeon synth with noise floating as an atmosphere rather this is noise with a direction much like a rip in space and time that disrupts as it moves.

Its going to take a lot to be the last record on the digest and we just had a full length of harsh noise. What could possibly beat noise in weirdness? Bagpipes. An entire album’s worth of low fidelity bagpipping. Now this could seem like a gimmick but honestly if one is int he mood for the sound, then the tone and direction of traditional bagpipe music resembles the melodies of dungeon synth. This could also be still synth just cast in a bagpipe sound. Regardless this may just well be a new direction in the music where we all don kilts and throw giant logs at festivals.