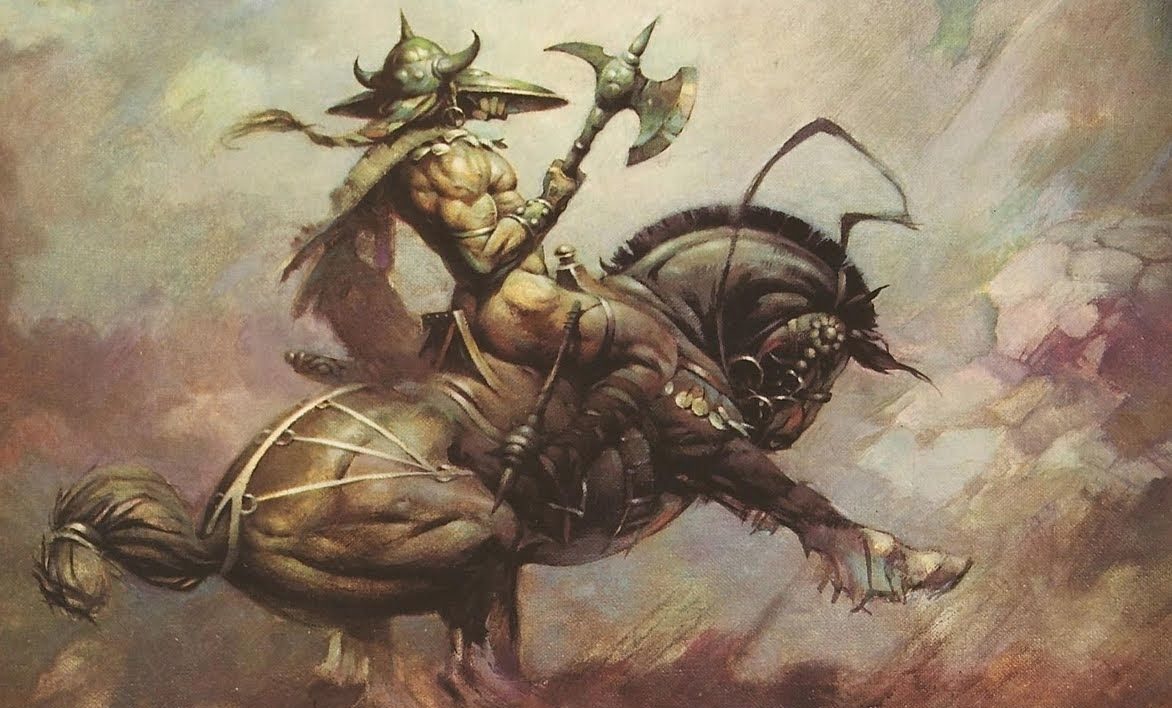 I think it is going to come to the point where my choices for Frazetta paintings are going to delve into the racy selections. Before we go full nudity with images how about we slip into adult artwork with this wonderful 1967 painting called Apparition. From the limited amount of records on Frazetta paintings, I can not find any magazine or book cover that this painting is attached. This does not mean this painting wasn’t used for something, rather, any connection is lost. What we do have though is a muscled figure, most likely Conan, confronting a half nude, alright full nude specter. The painting fits Frazetta’s style of having minimal background with the majority of detail concentrated on the main figures. This gives a surreal quality to the painting as it could take place anywhere from a very concrete setting to a more abstract narrative. whatever the case, the action is present as Conan (?) rears his horse at the sight of the ghastly ghost which is halfway between erotic and terrifying. Enjoy the full painting while sampling new traditional heavy metal.

Best album art I have seen in probably 15 years. I mean look at that fucking thing. What is he riding on? Holy shit. If album art tells you anything it is the potential for the music to make you feel like a goddamn 4 handed steel warrior riding on a death wolf also made of steel. Jesus, this is awesome without any chaser.

“Traditional Epic Heavy Metal, inspired by NWOBHM & US Power Metal, developing a mixture of historical and fantastic themes.” It is not often that a Bandcamp description nails everything you love in one sentence. If that pitch was not enough get you in, rest assured in the fact this band lives up to all of the altars they kneel in fidelity to.

Ikelos is from Chilean which has been seeing a boost in recent heavy metal bands. While it is far from calling it a center, this month two great new acts are hailing from Chile. Ikelos keeps the quality high with a dynamic presentation of traditional heavy metal with gruff and aggressive singing. If Chile has anything more like this, we would love to hear it.

Ymir’s Blood is odd. Well, in comparison to the rest of the bands presented in this article they are odd. This is mostly due to their crushing low end which floods the filed much like the run of blood after carnage. This is n’t helped by the fact their 9 minute opener is a sludge driven instrumental. Once you get to the melodic vocals which compliment the bruised barbarian instrumentation, the quality of Ymir’s Blood can be fully comprehend.

I do not say this often but Metal Animals could use a bump in volume. For a person who enjoys low fidelity, the quiet nature of the recording does not compliment the balls to the wall feet on the flaming couch atmosphere for this band whose EP is a knockout with a bunch of teeth on the floor of a parking garage. We are not even going to get into the band’s fetish for animal print.

Yes to everything about this. Lucifer’s Fall studies under the tutelage of a very specific brand of epic doom that boasts classic riffs and operatic vocals that fall between Candlemass and The Obsessed. The tone and warmth which comes from Cursed & Damned is enough to cast this release as owning no allegiance to any time period. 2017, 1977, or 1177 are the dates between this monolithic slab of traditional doom.