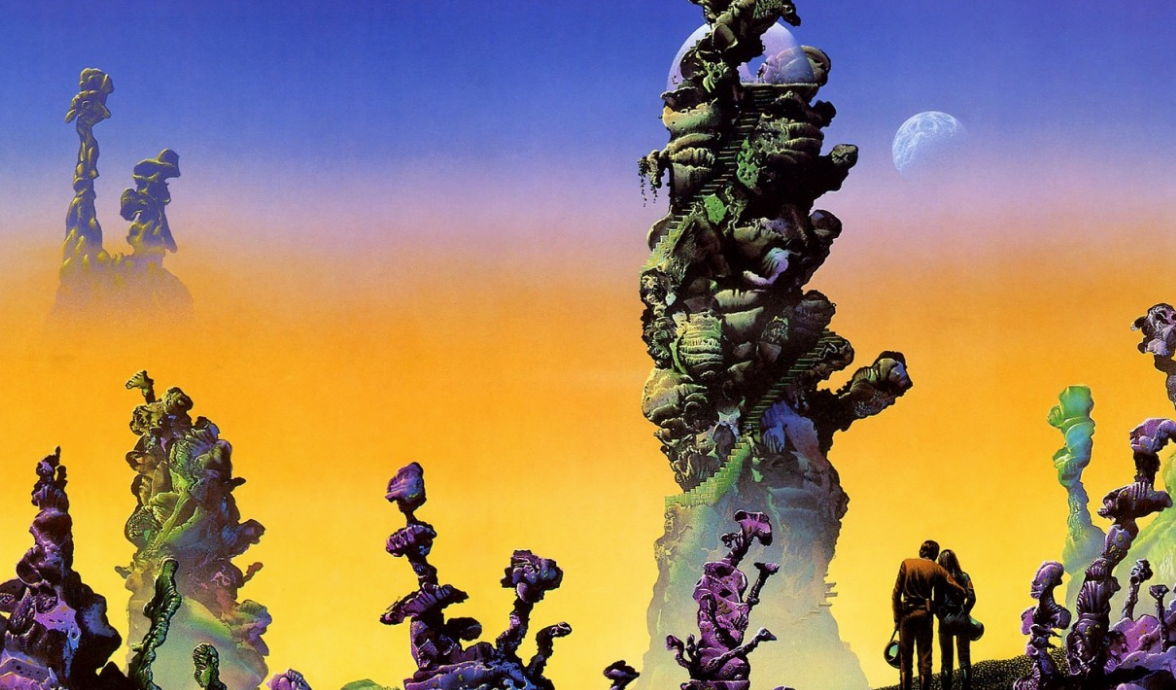 This month’s Tim White image is a gorgeous image depicting two figures reveling in their apparent solitude among lush alien foliage. The cover was used on 1992’s Exile by Michael P. Kube-McDowell though the synopsis “The surviving witnesses to an alien encounter have been sentenced to exile for two decades, and now one man is ready to listen to their forbidden memories” does not feel like it fits the cover image. Regardless, Kube-McDowell’s Trigon Disunity trilogy recieved much praise in the 1980’s as well as a 1990’s trilogy of Star Wars Expanded Universe material called The Black Fleet Circus. All of that sounds amazing and something I want to read on a rainy day.

This is going to be so big in certain circles of the internet. I feel that I could write a full length article on Traveler being the end result to a silent revolution and resurgence of traditional metal in contemporary times. What began with a fleeting interest and stupid acronym of NWOTHM and heaps of bands chasing in on the same sound has cooled into a solid group of bands picking at ore of 80’s speed and heavy metal without any need for costume or pageantry just an understanding of riffs and their importance. Traveler’s self titled debut is the manifestation of niche hype and talent which is making the band and a core group of people incredibly happy.

You see, I knew Traveler would be too big for a blurb. Gatecreeper is also from Canada with the same vocalist as the previous band. J. Priest heads both bands and while their sound is from the general valley, the locations for both of them could be miles away. Gatecreeper is listed as epic heavy metal which is closer to doom at least in its tempo with a heavier leaning on soaring vocals. Grey Maiden is a 4 song EP to follow the bands 2018 debut East of Sun. I would say it is to keep the band in the minds of the public but J Priest’s other band is already doing that so I think everyone in Canada will be fine.

With all of this talk about resurgence and reference, there are also bands that just like to play power metal. Vandor is one of them and this 2019 record is their debut. there are a lot of influences which merge into the confluence of this band but one of the largest is Blind Guardian or whatever power metal is played at 60 MPH with the lead singer singing with his head out of the car. Come if you want to feel good about everything in the world.

Traditional doom is something that is of interest to me in a world of stoner and sludge doom. It is not that I do not think the sound has much to offer for people rather I am not into the aesthetic of narcotic bong rips. Traditional doom, however, following in the wake of bands like Pentagram, Trouble, and Reverend Bizarre does hold interest and Palmistry’s dreary atmosphere and high occultism grabs ensnares my interest like no other.

This was a late find in my search for “epic heavy metal.” Though that tag is meant to apply to bands like Solstice, Eternal Champion, Visigoth and other traditional metal, it is usually used by any band that is looking to pat themselves on the back. Iron Griffin seems to get it though. With candles lit in service of old heavy metal masters, they set their vocals high and low and craft an old tale of might and magic.