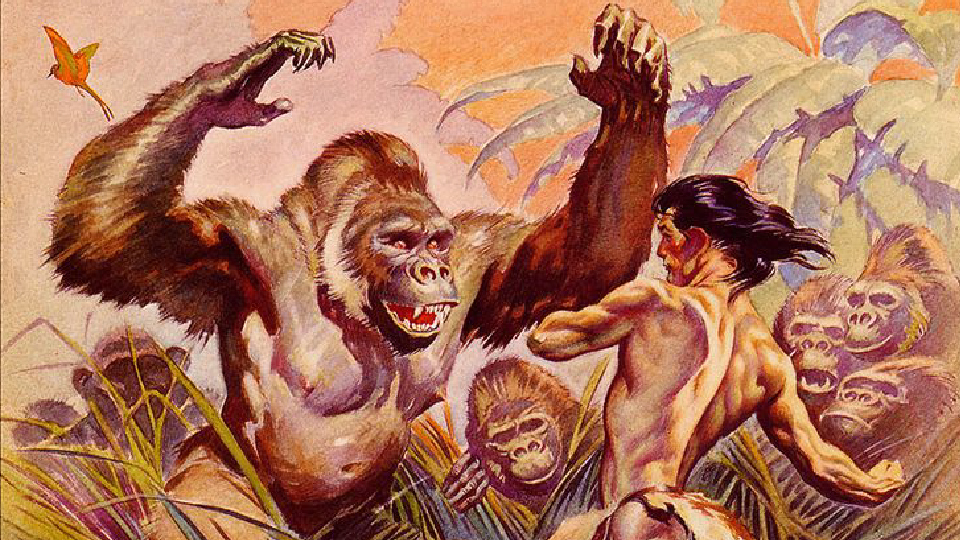 As always with this series, I enjoy highlighting art, mainly from Frank Frazetta, but also celebrating other popular works that could possibly align with the sound of traditional heavy metal. Case in point, pulp fiction. If we are going to be more specific than the works of Edgar Rice Burroughs. Though this writer has many works collected in his career, the name Boroughs is enshrined to two characters, John Carter and Tarzan. The later is where our picture comes from and not from Tarzan but his progeny Korak. The painting by Frazetta crowned the 1963 Ace publication of Son of Tarzan which is the fourth installment in Burroughs Tarzan series and sees our protagonist following in his father’s footsteps in being torn between the civilized world and the untamed lands of Africa. I am not going to say Son of Tarzan was amazing and even sets up a continuation for his son to take over adventures but the fourth book in an ongoing serial adds to the charm of reading multi part fiction. the art by Frazetta depicts a muscle bound man defending a very western looking girl even though Korak is suppose to befriend a young Arab girl by the name of Meriem who acts as Korak’s sibling. I do not think this grown woman is Meriem but the other way around isn’t going to sell books.

Oh man, I am so confused with this cover. It’s a dead native chief against a raging seascape? Alright I am down with only because the preview track for Ice War is so stunning in its confidence and general aesthetic that I will run with the cover. Ice War is due out in a few months via Shadow Kingdom which has been known for their reserved release schedule of fantastic heavy metal.

Angel Sword’s 2016 record Rebels Beyond the Pale may not have shown up on many end of the year lists but for some it was one of the better releases in an explosion of new traditional metal. Angel Sword returns with a short sngle/EP which reminds its followers why they are the coolest band to hang around. With a cathy beat combined with subtle vocals which smell of smoke and alcohol, somngs like “Satan Wears Leather” sounds like a drunken sing along benetah an overpass while watching the sun rise on the horizon.

Let us return to Shadow Kingdom for a moment to listen to another upcoming release by A british band that seems to be devoted to the occult and also the hard rocking history of metal. Not only does Lucifers Chalice have an aesthetic going for them but by the sound of “Hung at the Crossroads,” the band manages to stretch a doom song on for 11 minutes with every minute being interesting and engaging. This isn’t slow or suffocating doom rathert the opening for a sword and sorcery film that is going to be fantastic.

“Mike Schmidt writes and records all instruments and vocals in his basement with 1 microphone and Audacity. “ Well. wioth that type of introduction, I cant see why everyone wouldn’t love this record. Ha, this is going to be bad. Oh my this is good. White Stallions do no give a fuck or atleast the projct is intended to look like no fucks will be given. By the sound of the self titled debut demo(?) Mike Schmidt” nails the punk influenced vibe of doom with a raw aesthetic that is interesting and never deterring. This sound may actually be of interest to anyone into new garage / psych or maybe just anyone that can drink 10 PBRs while they are here.

I think since we were already flirting with punk, we might as well travel back to a year where punk was chatting up heavy metal or maybe the other way around. Zex could be a punk band with a metallic spirit as the single “Fight For Yourself” is infectious in its snotty chorus and Ramones worship and sneering in its attitude to anyone who says otherside. Time for 10 more PBRs.

Crimson Dawn is from Italy and I am unsure whether or not they are aware of this whole traditional mtal revivival. I am not going to assum anything but the soundand style of this band compared to Angel Sword is different. What is the same is the presnetation of Crimson Dawn’s second album is fantastic and convincing for a band that wants nothing more than to immerse its listeners with shimmering stories.

I am always on the lookout for good bands from places I would not expect good metal to come from. Bein from the general area, my knowledge of Pennsylvania is sure of metal bands from Philadelphia and Pittsburgh with a big question mark for the middle of the state. Metalwülf champions to risde of centeral Pennsylvania traditional metal scnee with a decent jab at speed / heavy metal. Carry on guys.