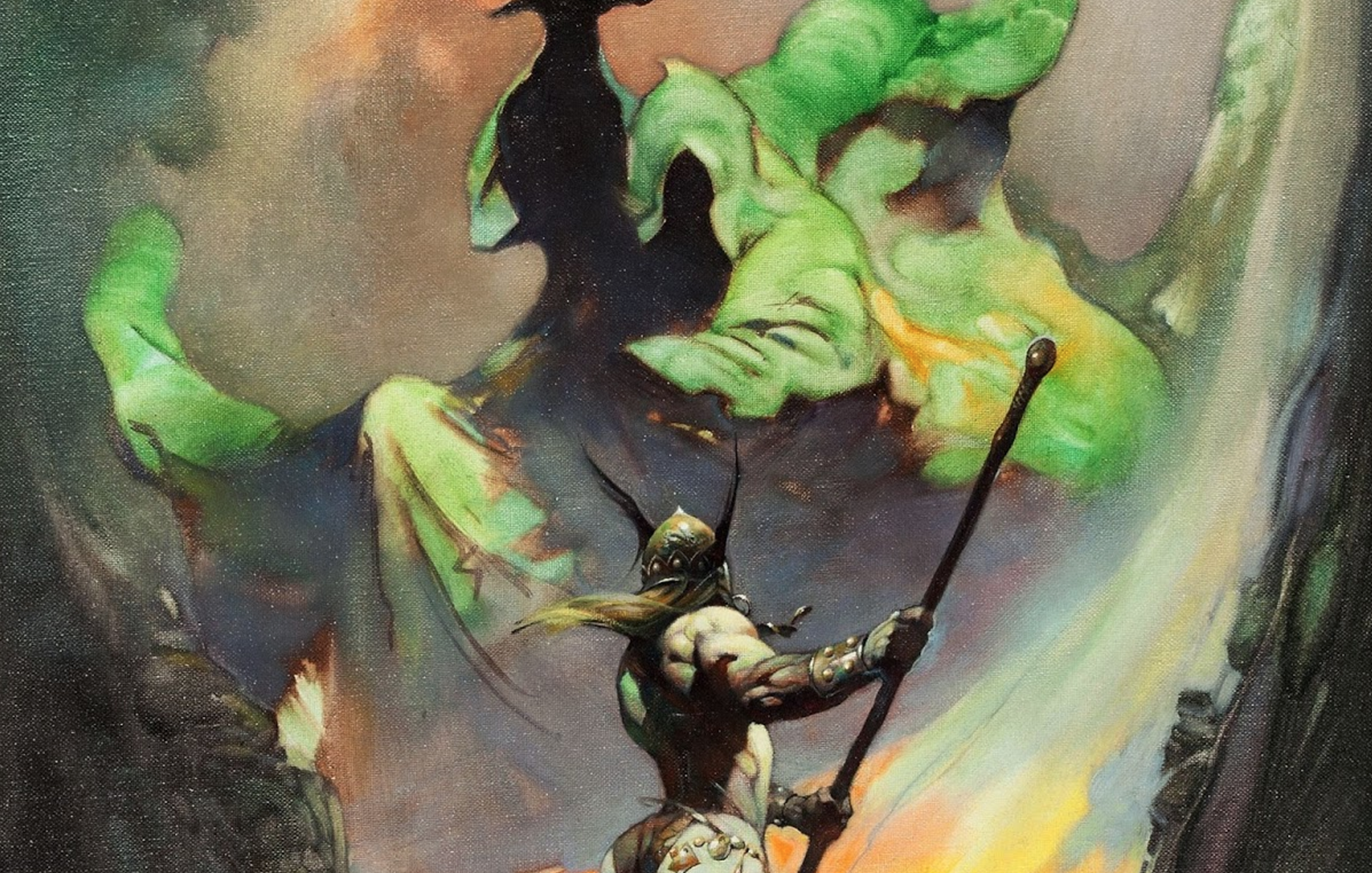 As we seen with most of our cover images, this painting by Frank Frazetta, titled the Norseman and made in 1972, graced the cover of the inaugural volume of Flashing Swords magazine which was an anthology of sword and sorcery and other weird fiction. The first issue had stories from Fritz Leiber, Jack Vance, and Poul Anderson. unlike other publications which sort of butchered the original composition,. Flashing Swords was unique in the fact that the entire Frazetta painting was given a nice black frame which allowed the picture to float as if on display. the series would only run for three more volumes and also make use of more Frazetta paintings in its second volume. The painting of The Norseman depicts a familiar scene of a muscle clad warrior confronting a spectral like creature. The figure wears a winged helmet and brandishes a nasty looking spear. As with most Frazetta paintings, I cant find too much information surrounding the figure which sort of leave more to the imagination. Enjoy this confrontation of the supernatural as you indulge your senses on new speed and heavy metal.

Hell Fire certainly leans on the tropes of NWOBHM but without any necessity to become costumed cartoons. Free Again is this California based speed metal band’s second attempt at wowing the world that they have things to say. the fact these San Francisco natives are still unsigned when their music is nothing but a party in musical form is baffling. If you want to hear 80’s worship without the need for near parody, then this speed metal dark horse is for you.

Sanhedrin is from Brooklyn and sounds like a rooftop party that consists of 1 person and 12 beers and maybe the sound of an elevated train rushing by. Not only does this band have the look and style for a debut band but their debut album checks all the right boxes for a fantastic bottle slinging contest.

I do not know about that cover. Actually I do. I love it. Somewhere between speed, power, and echoing vocal yells is a band that has so much energy, you could power a small city. Enter Battle Raider, A Mexican band who needs to be constantly moving otherwise their heads will explode. If this artwork is not an indication, their self titled second record is going to go over the top and then probably a bit higher before swooping down for a death dive.

This is the second Mexican band this month which leads me to daydream about a speed metal renaissance happening in Latin America. While we are probally a few years off from my daydream, the sound of Thunderslave is here to sing me into fitful slumbers. With a falsetto that breaks small windows, the debut from Thunderslave can be there to guide you along your 65 MPG fantasies.

So this album came out in 1990 but it is due for a new assessment. Creulla was a power / heavy combo based out of Portland Oregon who made two albums that no one really listened to. Despite the albums being well produced and varied in their themes and theatrics, the sound of deep immersive power / prog / speed / heavy never really caught on. Add to this they centered their albums around this villain called Cruella who was never really explained. No matter since the reissue for this album promises to bring the rude guitar tones and the impatient vocals that have made this band semi famous.