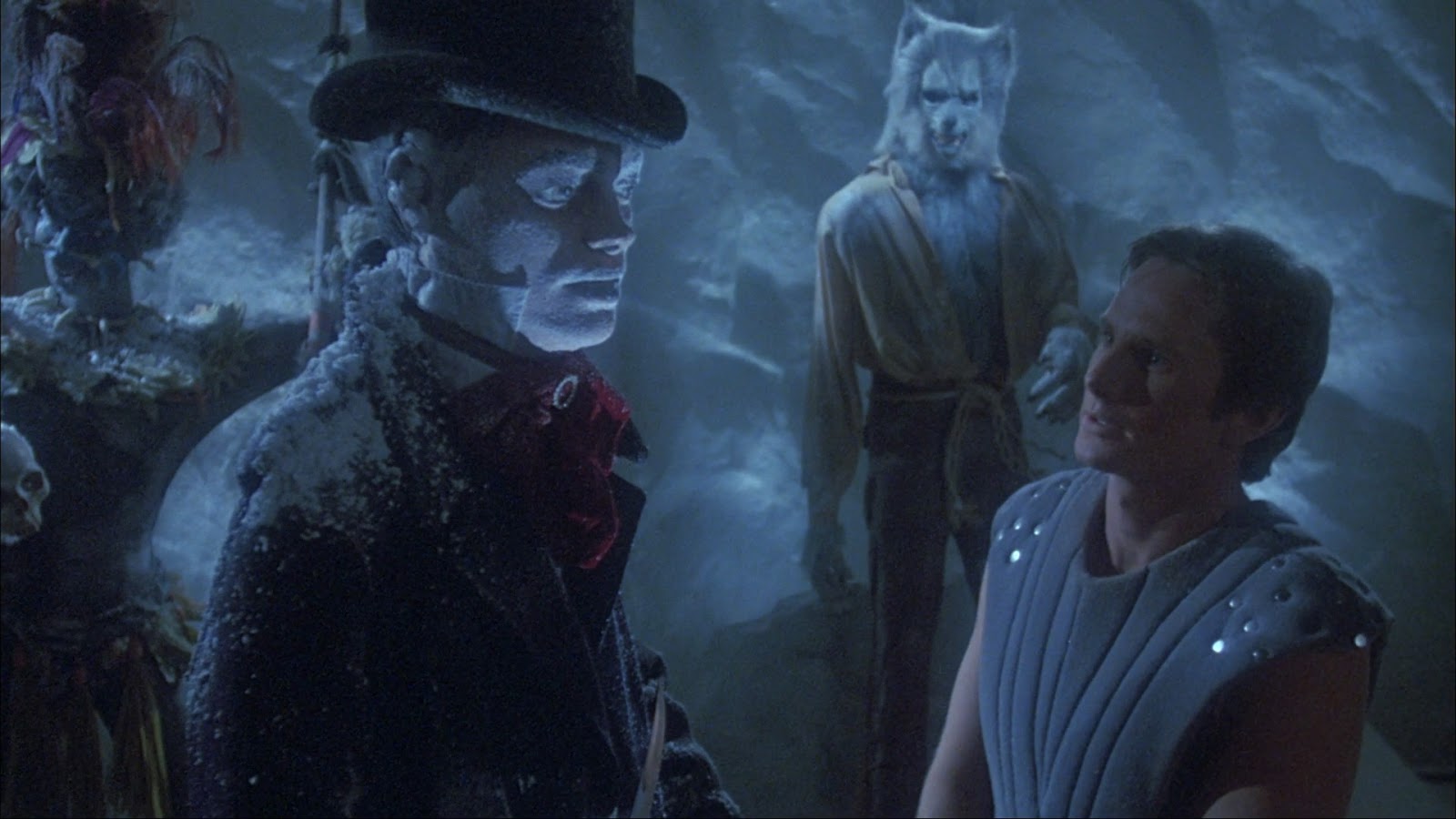 This article starts my relapse into the world of 80’s fantasy films. Though I seemed to have covered a broad range of classics like Fire and Ice, Conan The Barbarian, and Highlander, there exists a wider landscape of movies that all are either terrible or wonderful or both. Whether nostalgic for some or completely new to others, these films come equipped with some of the greatest taglines in history: “A demonic wizard challenges a modern-day computer programmer to a battle of technology vs. sorcery, with the programmer’s girlfriend as the prize.” Holy shit that sounds fucking amazing. Lets watch it. Holy shit this movie is god fucking terrible.

Dungeonmaster aka Ragewar existed at a time when movies were being made to capitalize on other larger successes. Actually, I still think that happens but in the early 80’s, studios and directors tried to capture the excitement that was being spurred from 1982’s Conan the Barbarian and perhaps to a larger extent, films like Tron and Star Wars. If one steps back and looks at the 80’s as a whole, the prevalence of science fiction and fantasy is astounding compared to previous and subsequent decades. With this influx is as much bad as there was good. Dungeonmaster unfortunately falls squarely in one camp. The film takes its premise from Tron and tries to loop in the niche genre of Dungeons and Dragons. While the film does have a loose aesthetic of magic and role playing challenges, Dungeonmaster has zero relation to the game. In fact if one were to make a game out of this movie it would come in a weird bx and ruin someone’s damn Christmas. Our hero in this film is Paul Bradford, played by Jeffrey Byron, who is a top notch and successful computer programmer toiling away in some low level IT job. Along with being almost loved by everyone at work, Paul has a special neuropathic link to his home computer. Hold on there, just you wait. This link allows Paul to command traffic lights when he runs, withdraw money from his ATM, and pretty much coast through his job using interface found in his glasses. The silliest part about this whole premise is not the fact that this happens, nor explanation which is given involving some sort of accident, no, the ridiculous part about this neuropathic link is that this film could have been made without it. By the time you are saying “wait,” to the screen, the viewer is whisked away to Mastema’s realm aka the hell plane which burning trash fires.

Let us take a breathe here and find out what is going on as this part of the film is what I believe constitutes the actual plot. Mesetma is an immortal planeswalking sorcerer played by the great Richard Moll who through magic achieved immortality somewhere along his wizarding life. Through his years he became bored and now looks for worthy adversaries to test their mettle for his entertainment. Paul and his special computer were picked to test their worth against Mestema and his 7 challenges. The prize is Mesemta setting Paul and his lovely girlfriend Gwen free. Do they get a choice in this? No. But that is not point. The point is Mesetma is wowed by technology and proposes some of the easiest challenges for his adversaries. I mean all they have to do is hit a crystal or overcome Blackie Lawless from W.A.S.P.

It would be easy to rip apart this film. Trust me there is enough parts here that are borderline absurd and boring. I believe after much prayer and contemplation that Dungeonmaster never intended itself to be a masterpiece on par with the films it tries to emulate. One can see when reviewing the personnel involved that this film was a step for producer Charles Band to what would eventually become Full Moon Features. This premise of a seven challenge against a demonic sorcerer is really a way for seven different people to write and direct seven short segments. The people who are writing and directing these are an array of creative personal for films with interesting careers. Charles Band would eventually direct and produce the widely popular Tancers and the direct to video Puppet Master Series. David Allen is a stop motion animator often compared to Ray Harryhaussen. Ted Nicolaou would go onto to make TerrorVsion while John Carl Buechler ran the effects department for Roger Corman’s New World Pictures. In fact, Dungeonmaster seems to be a fraternity of creative personal that centers around what would eventually become Full Moon Features. Dungeonmaster was released by Band’s Empire pictures which served as a stepping stone to Full Moon. Empire would eventually make Trancers and Re-Animator which proved to be a box office success before the studio’s financial collapse. My point in bringing this up in the review is only to point out the trainwreck which is on screen may have hidden charm as a chapter in a very weird book written by some very strange people. An entire thessis chapter culd be written on these seven challenges but suffice to say they are a hamstrung effort to showcase makeup and special effects into as little time as possible. Also with the addition of a mystical realm, there doesn’t have to be much explaining what the hell is going on. Enter an ice cave with villains and mythical creatures from until Mesteme unfreezes them. Why is Albert Einstein in there? Exit Ice Gallery and into Demons of the Dead with a gross looking cave run by a small cave creature named Ratspit. Segue to a full blown W.A.S.P concert and have Paul fight the band members while they play “Tormentor” from their 1984 debut. Each of these challenges is overcome by rescuing his girlfriend or dispatching some entity that is sort of super easy.

I would be neglecting my duties to mention how technology or Excaliber or “Cal” fits into the film. Cal is the given name to Paul’s home computer who he has a neuropahtic link. Within the hell plane however he is given computer gauntlet which Cal can shoot lasers from and … well that is about it. The point remains that Mestema could have just given that to him to make things even rather than set up this whole absurd premise of Paul having an accident from the computer. And that bring up another point. Why Paul? I know Paul has his secret interface with his home computer and Mestema seems to be wowed by technology as it is magic but there probably more top level secrete computer programmers working at NASA or for the CIA that Mestema could challenge. Hell, the supercomputer Cray-1 was developed less than 10 years prior that Mestema could throw monsters at. Fuck is this immortal sorcerer relegated to 1984 to find his adversaries? What about traveling a few years into the future to play chess against Deep Blue or 300 years into the future to do battle against copterbots?

Dungeonmaster only leads to more question s that never get answered. The film got an unofficial sequel as a 30 minute segment in the horror anthology Pulse Pounders directed by Band in 1988. On the whole, Dungeonmaster is a bizarre feat in stilted acting, pointless plot, and outdated effects that all coalesce into an interesting artifact of cult cinema. Do not expect anything and get so much more in return. It was not until I stopped trying to have fun that I started having all of it.