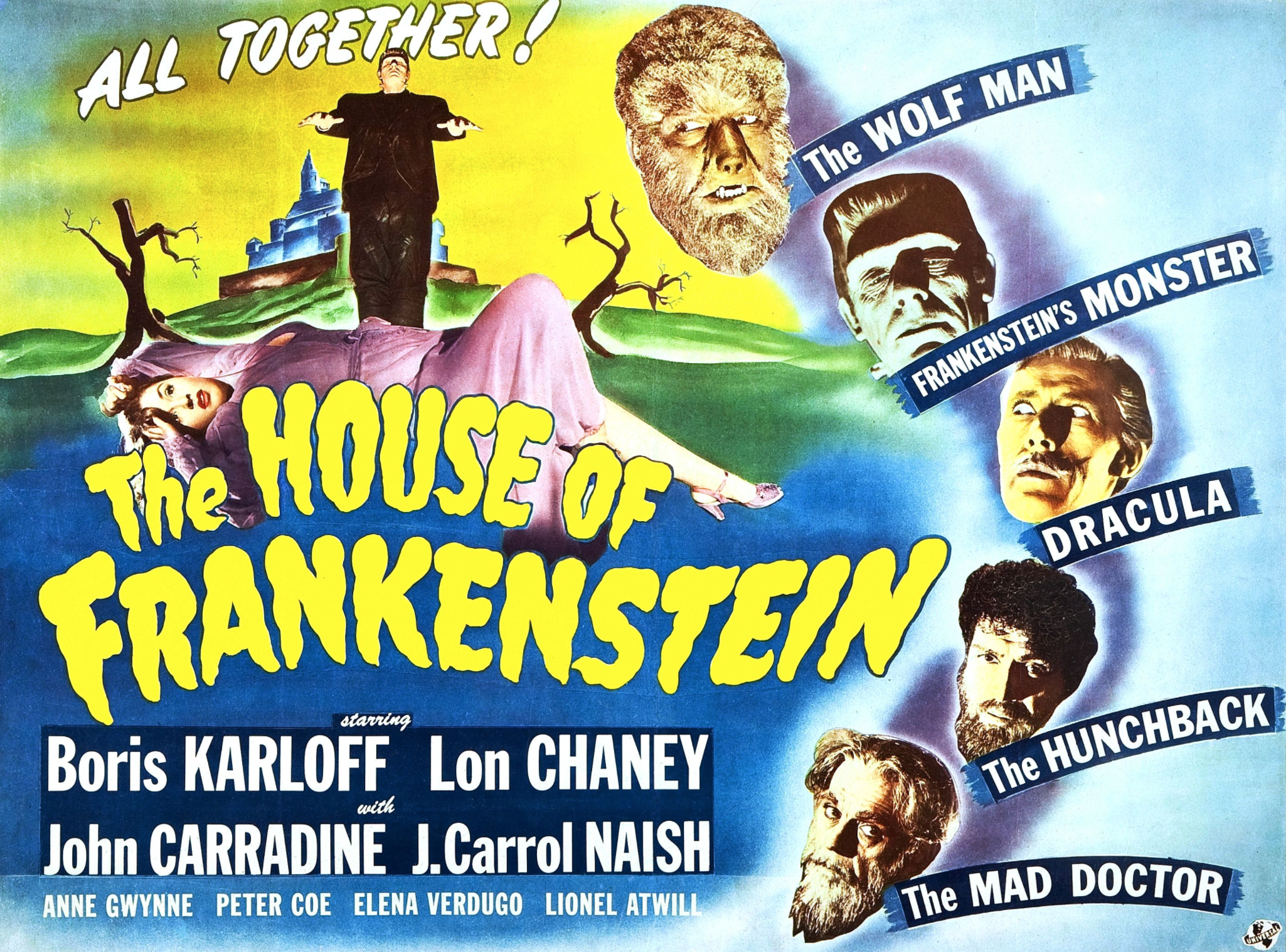 In my previous reviews of classic horror films, I had a difficult time containing my excitement for the eventual crossovers and rally films. Beginning with Frankenstein Meets the Wolfman, the rally films saw various individual horror icons mashed together despite whether or not the idea made any sense. Way before crossovers would become a staple in comics, these rally and mash films gave audiences a chance to see their favorite villain fight against their other favorite villain. This was a time when studios kept throwing everything in the fire to keep the flames burning as bright as previous years. Because of this, the potency of these characters became exponentially degraded and soon the rally films became more akin to cartoons than vehicles of horror. Movies like House of Frankenstein and its sequel House of Dracula are fitting conclusions to a first arc, which began with such wonderful intentions.

Before we begin, let us be honest with what this film is. House of Frankenstein is a sequel to the events that transpired in Frankenstein Meets the Wolfman. The top billed character, Dracula, only appears as an ancillary character in the first half of the film. In fact, House of Frankenstein could have happened without Dracula’s involvement given enough imagination. Additionally, the other billed characters of The Hunchback and the Mad Scientist are supporting pillars to the two main attractions. Since House of Frankenstein is connected to Frankenstein Meets the Wolfman, the plot centers around, you guessed it, the gloomy and suicidal exploits of Henry Talbot who wishes to die after being thawed out from the frozen sheet of ice. We really need to talk about not leaving these monsters laying around. Words are not needed. I just want a sitcom with these two palin’ around getting into murder adventurers.

For as much shit as I am about to give House of Frankenstein, the first half of the film is intriguing as Dr. Niemann is a very mad scientist obsessed with resurrecting the dead. His associate, the Hunchback Daniel, is one of the earliest manifestations of the character who would soon be known as Igor. Both scientist and hunchback are locked away in an insane asylum until a fateful storm breaks down a wall and they both escape. After freedom, the two murder a traveling oddity show proprietor and decide to enact revenge on former associates. Niemann is loosely connected to the Frankenstein continuity by his brother Fritz, who was the assistant in the first Frankenstein film. Do not hope for really deep continuity as the mad scientist is really a device to get to the monster and spend the rest of the film trying to get him up and running for unknown reasons. To aid in his devilish revenge plot, Niemann enlists the help of Dracula, who just happened to be in the traveling oddity cart. This actually makes sense as the two previous Dracula films dealt with other members of the vampiric family. No seriously, I can kind of see this working.

The first half of House of Frankenstein concerns Dracula being wielded by Niemann as he tries to enact revenge on the Bürgermeister Hussman, who aided in Niemann’s incarceration. Dracula terrorizes Hussman by seducing his granddaughter and causing much dismay. The first half of House of Frankenstein possesses much promise and the portrayal of the dark count by John Carradine is decent if not intriguing. There, of course, are some silly bat transformations but all of this ends when Niemann double crosses Dracula and leaves him to rot in the sun during a chase by the police. Wow, this mad scientist is more douchey than mad. It is only after Dracula turns to dust that we are introduced to the two slumbering lunkheads who are encased in ice. Also along the way we are introduced to a gypsy woman named Ilokna played by Elena Verdugo. I do not know which character would be more likely to stab me in the back, the gypsy or the mad scientist. No, you moron…not towards the quicksand swamp.

I know in previous reviews I lauded the depressed character of Talbot for his macabre obsessions. By House of Frankenstein however, the whole thing wears thin as Talbot still seeks release from this mortal coil and nothing seems to work because people keep thawing him out. Just let me sleep for five more goddamn minutes. To make things worse, the gypsy woman, who was originally showing affection for the deformed hunchback, turns into a bitchy junior high student and soon throws herself at this new man with an animal charm. The classic nice guy hunchback versus the jock wolfman allegory escalates as Daniel continues to serve the douchey mad scientist in reviving the monster on the promise that he gets a new body. Spoiler, it doesn’t happen.

It is easier to point out flaws and inconsistencies in this film as they are more prevalent than logical storytelling. The group of misfits returns to the SAME town as previous films but still has a population that disbelieves when people turn up dead from wolfbitea. Werewolves? Thats just stuff of legend. No, it has happened at least one other time a couple of years ago. Why do you not remember this? The only continuity from earlier films seems to be when the villagers get angry and grab their torches and pitchforks. Well, I guess this is in our blood. To hunt monsters who seem to keep showing up at our town.

House of Frankenstein ends as predictably as it begins. The mad scientist finally meets his end at the hands of a scorned hunchback, then the monster finally wakes up in the last 10 minutes of the film and throws Daniel out of a window of the castle. Though the film was lackluster to begin with, the ending is phenomenally hilarious as the monster carries the crippled doctor unknowingly into quicksand which lays outside the castle. No…what are you doing…you idiot…stop. The films conclusion happens very abruptly as the dramatic scores reaches through the credits as if there was more room to make a better ending.

I appreciate the direction of horror films in the 40’s as their legacy would eventually be reviewed by the Hammer films of the 60’s. Classic horror holds as much goofy fun as it does cold fear. These characters would not be what they are unless they were cast in shitty films. The line between horror and pulp becomes blurred as these films were concerned with a purpose abandoned long before they met their very low end.