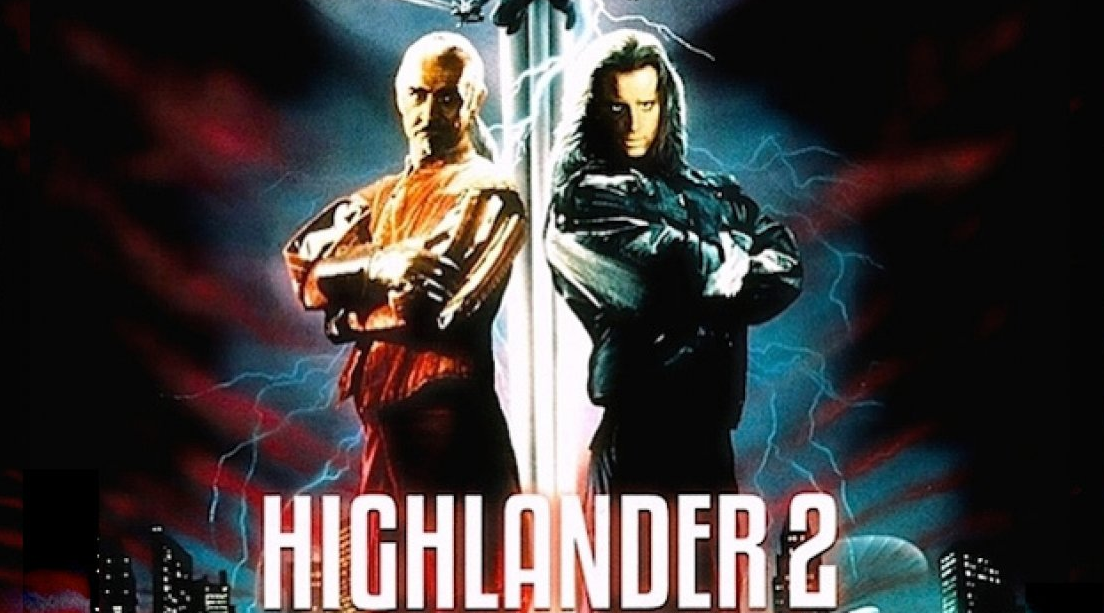 I know I make jokes about 90’s fantasy movies being terrible but I feel people really do not get how true it really is. Seriously. What in the fuck happened for 10 years?

Let us travel back to the magical land of Highlander. As previously reviewed, Highlander was a competent sword and sorcery movie, with a believable plot and an interesting angle in terms of setting. The 1986 film also spawned a successful television show. Perhaps the strength of the television series, originally released in 1992, was due to the universal disappointment at the second installment in the movie series. Make no mistake, Highlander 2 has been called, not only the worst film in the series, but one of the worst films of all time. It’s litany of complaints led to numerous alternative versions trying to correct the travesty of the original theatrical release. I could review the “Renegade Version,” which rewrites a large chunk of the plot but, why in the world would I do that? I feel it is only fitting to watch what others were put through in the Spring of 1991. They can’t be serious with this can they? This is a joke, right? How much did they spend on this?

Let us recap the ending of Highlander. Connor Macleod bested his adversary, The Kurgan, and was awarded the “Prize” for being the last of the immortals. Macleod’s prize was mortality, knowledge, and the ability to have children, whatever that restriction entailed. This makes sense as 40 years from that point is when the second movie picks up with a very old, grizzled, and mortal Macleod. Macleod, aside from being an art collector and formally immortal, is also a scientist, who at the behest of his dying wife (from the first movie) solves the ozone crisis by creating a giant fucking shield around the earth that I guess protects everyone. It also makes everything look like concept art to a proposed Bladerunner sequel. Hold on, that isn’t the crazy part. Come on Connery, you didn’t have to come back for this one. You were just in The Hunt for Red October. Come on.

We soon learn that Connor Macleod, Ramirez played by Sean Connery, and pretty much all the past immortals were not just immortal but goddamn aliens. That’s right, aliens. These immortal aliens were exiled to earth as punishment for starting a revolution against their military state, and it’s leader General Katana. This is the crazy part. The “Prize” is the reward to the exiled immortal who reeks the most amount of havoc and bests all the other exiles. The winner then gets to chose whether or not to return to Ziest, their alien home planet, or grow old on Earth. Wait, what a weird fucking prison sentence. Go to prison. Fight to the death. And your prize is to stay in prison or return to the planet that banished you in the first place. Mmmmm thanks assholes. I’ll take choice C.

It is worth noting that this alien subplot was the exact thing cut out of the Renegade Version. Why? Because it makes no goddamn sense. Ramirez is the leader of the alien rebellion and is exiled along with Macleod. This makes for an awkward meeting in the first film when they pretend not to know each other. Also, this makes Ramirez’s line in the first film “I was born 2,437 years ago,” a downright lie. No you weren’t. We were born on Zeist together. Are we all brainwashed too? If that is the case, was it a part of our sentence on this planet? You’re only 20 years older than me. Ramirez, why are you acting this way? The Renegade Version removes the outer planet setting for a prehistory storyline where I guess Macleod forgets he knows Ramirez. I am confused. I heard this other version is better but I am not holding my breathe.

So that is where we are. Aliens and a heavy science fiction dystopia. Macleod, still old, gets a rejuvenation when he is forced to fight two aliens who act like the psychotic weasel from Who Framed Roger Rabbit. I guess Macleod is not done highlandering yet because after decapitating the annoying aliens, Ramirez is summoned back to life for some unknown goddamn reason. So does this mean ALL immortals can be summoned back in a death trade. Can we get the Kurgan back? Oh yes, all of this is happening while General Katana, the one who originally orchestrated the group’s exile, takes it upon himself to seek out Macleod. Holy shit, that was technically 500 years ago right?. You look great for your age. Alright, fine I get it they are immortal but they still hold a grudge like no other. I am still not convinced. Time to kill the wabbit…hee hee hee.

Even though I refused to talk about Virginia Madsen’s role in this film, it should be noted that she did a fantastic job in Candyman in 1992 and Sideways in 2004. Just not this film.

Ramirez and General Katana both come to earth in two different scenes that are both fighting for which one is more unnecessary in this film. Katana’s scene literally recreates the car chase scene from the first film with a New York City subway. Katana terrorizes the passengers by racing 400 miles down the track and crashing into a wall. It is true, I didn’t need to put that in this review but I am going to because they put it in the movie. This whole scene was a broad intention to show that Katana is evil. Thanks. On the other side, Ramirez gets dressed up in a suit and pays for it with an earing. Again. They put that in the film. If this whole part seems to be out of place in the review, it just highlights some of the odd choices in narration that were chosen to carry this narrative. Aside from having an asinine plot, Highlander II seems hellbent on being the most unbelievable film ever made, and this is coming from someone who wants to believe gnomes exist.

So I am just going to move this along to the end where Macleod, Ramirez, General Katana, the dickhead CEO of the Shield corporation, and Macleod’s love interest (the last two I purposely left out of this review) all battle. Why are they battling? They say they are trying to take down the shield, which is now just a ruse for corporate control over the world, but really it’s because two immortals can’t be within proximity of each other without fighting. Everyone pretty much dies and the shield is taken down by Macloed’s famous orgasm of quickening static. Needless to say, Macleod and his love interest return to the alien planet and everyone breathes a sigh of goddamn relief that the film is over.

Fantasy and science fiction films are not without their terrible entries. Watching sub par sci-fi and fantasy can be fun, as the genre’s internal escapism is strengthened by well worn tropes. Highlander II manages to not only fail at immersion but it seems to be actively trying to cut all logical ties with the first film. This is perhaps the most aggravating aspect of the film, as it did not really need to go far to be pretty decent. The second installment was directed by the same Russell Mulcahy and had double its budget from the first film. Additionally, Highlander II had a build in following the initial movie’s cult success. How did you guys fuck this up? You. I am talking to you. All you had to do was anything else besides what you did. While the idea of watching a bad sci-fi movie is somewhat entertaining, Highlander II is an exercise in futility, as the viewer attempts to figure out just what went wrong. The narration, acting, scenery, and general existence is far from entertaining and nowhere near charming. I wish I could say I had fun during the theatrical version but everything about this film leaves a cold numbness throughout my body.

Also, enjoy the trailer, specifically the line “In all their years of existence nothing could have prepared them for…THE QUICKENING.” Wait. I mean that happens all the time right? I mean, The Quickening is when they absorb the soul energy from a dead immortal. It happened like 27 times in the first film. Why are you saying that? They are already prepared for it. It happens. Oh for fuck’s sake. Stop that laughing. You know what happens when you can’t…stop…laughing.