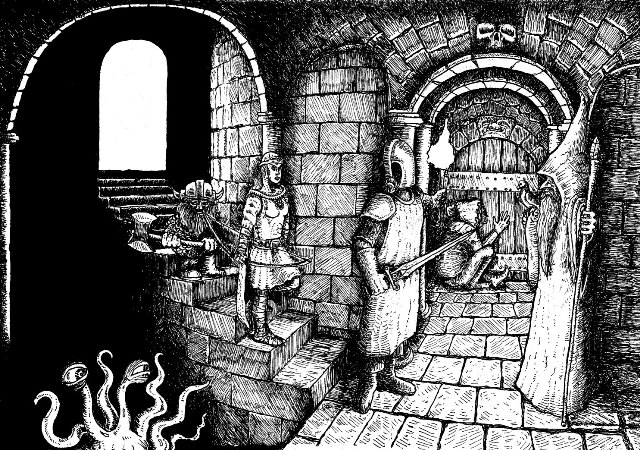 “Explore over 700 rooms, encounter more than 40 new monsters, and discover 18 mysterious magical items — and that’s just in the first book!”

These games I am reviewing are not new. In fact, some of the newer ones are still nearing 10 years old with the majority of them being from decades past. Perhaps this review might be useful for people interested in old school Dungeons and Dragons and avoiding and welcoming some of the hilarity which comes in it’s package. For me, who adores the flavor of old school systems, Labyrinth Lord was one of the first times when the reality of dungeon crawling came to a boil. Simultaneously, my love and patience were at odds. To the few people who I convinced to run through a megadungeon named Stonehell, I apologize for not warning you ahead of time regarding just what you were getting into. Actually, I’m not sorry, this shit was hilarious.

Labyrinth Lord is a clone of the Basic / Expert (B/X) sets of Dungeons and Dragons. The D&D Basic set, which soon included the Basic, Expert, Companion, Master, & Immortal sets (BECMI), was started in 1977 by Eric Holmes and was a reworking of the original 1974 game while Advanced Dungeons and Dragons was being made. The Basic set covered levels 1-3 and gave a reduced class option for new players. The Expert set covered levels 4-14 with more options and harder monsters. Labyrinth Lord is 98% the B/X game with minor changes including a level cap that goes to 20 and the fact that Clerics can cast spells on their first level. Some people buck change but if anyone actually plays these games, it is hilarious to think of how these things can be any harder. It should be noted that my group could have started out with an easy or introductory adventure but I decided to take them Stonehell. The concept of the megadungeon was born out of the development of dungeons and dragons when Gary Gygax and Dave Arneson ran players through their own person dungeons below Greyhawk and Blackmoor castle. The idea was the have a central place with multi levels of difficulty centered around a core of exploration. Since then, megadungeons have been a staple for Rpgs and Dungeons and Dragons for decades. Though the concept of megadungeons have changed slightly to just longer campaigns, there are fond memories and recollections from people regarding multi level dungeons including Doomvault, Temple of Elemental Evil, and Undermountain. Articles and recollections for these subterranean adventures have people fondly remembering hours of play and engagement with huge wall size maps drawn for daily play. These are the types of things which lure new people into trying into megadungeons for people not familiar with OSR or even RPGs in general. This is the interesting quandary one finds themselves when trying to get their players to be excited about a relentless and unforgiving 6 level prison where your characters are shit and the XP you are getting is fucking useless.

Stonehell is a dungeon scenario written by Michael Curtis to be used for the B/X or Labyrinth Lord systems. The name comes from the subterranean prison which was built by its inmates and soon the site of cruel experiments which eventually lead to the abode of dark mutations and evil spirits. Its inhabitants are twisted offspring of the original dammed prisoners who were forced to built the structure and now roam around in marauding packs. Add to the fucking ghosts, goblins, carnivorous rats, and hundreds of different type of terrible, and you have a full house of madness. Stonehell is designed as a one sheet dungeon where map, room key, and wandering monster table are all one or two pages apart. There is a fun zero level dungeon on the surface before delving into the vast immensity of the prison proper. Because of its size and minimal presentation, the true horror of Stonehell is not just the difficulty of the player but how much the GM has to do in terms of filling int the blanks.

Aside from some decent flavor introduction and backstory, the whole of Stonehell is a setup by the creator with most of the onerous falling on the GM. Aside from some scant room and area descriptions, it is up to the GM to make a 6 level super dungeon interesting for their players. This maybe difficult if people are already shaky about playing OSR or maybe even Rpgs in general. Long gone are the italicized boxes with flavor descriptions of each room put one into the story. No, now the GM has to recall navigations through the dungeon and then make those fucking rats gnawing at a dead goblin engaging for the players. I mention these facts because not only is Stonehell immense but the progression of Labyrinth Lord and B/X is very slow so time spent in the dungeon is going to be tedious, repetitive and above all else dangerous. If any system can be complimented on its realism, Labrynth Lord and old school systems really maximum the danger on the smallest things. Time to die by fire beetles. I spent the summer playing with some veteran Pathfinder / 3.5 players who after a few drinks were convinced to let me run Stonehell and Labyrinth Lord for a few months. They, like most people, were aware of grinding/crawling from video games like Final Fantasy and Dragonquest. Labyrinth Lord was their first introduction in pen and paper dungeon crawling and I believe they still resent me for it. The first encounter was with a room full of nasty goblins hiding out in the guardhouse on the surface level. My players, who all rolled poorly for their two charcters, burst through the door and with all of their heroics almost ended in death. This is not Pathfinder. There is no 10 points of being unconscious. Death is death. After plundering the goblins and searching the room, the players calculated up their XP and gold to equal a paltry 45 per player. This sounds reasonable until looking at the progression chart and seeing one has to get around 2000 XP to reach level 2. There were points where my players said “fuck this game,” before I managed to make them sit down and perhaps add in an odd potion to the shit treasure table. Add to this the tedium of mapping and exhaustion of spells from casters and one has a hilarious exercise in persistence. How did people play this for hours and days and months on end? How did people become so invested to where walls were covered in maps of subterranean lairs? Was it because there was nothing else to play.

Stonehell, despite me jabbing fun at the whole structure of OSR and dungeon crawling, is a beautifully designed adventure which is open ended enough to cater to a certain audience. Its flavor and persistent atmosphere of violence and madness resonated through it stone halls. Combine this with a playlist of dark ambient and the horror of exploration was palatable. Its nodes of creative prompts and barebones structure for running a dungeon is perfect for people learning how to DM and even trying to get better at running scenarios. Stonehell has a second book detailing the final levels and final 600 rooms of the ill forgotten prison. This is of course for people who get through the first 700 rooms.

Stonehell and Labyrinth Lord taught me many things. One is the persistence of old school systems. The idea of a 3rd level wizard or 5th level cleric means something because those levels were forged in the crucible of grinding. Nothing was given lightly in these games. Everything was begged borrowed, or stolen and at the end one feels good about how many monsters they didn’t die to. There are many things which I am fond of and one of them is finding a group of players who would be into clearing out a multi layered dungeon and spending a significant amount of time on small things like gradual wealth accumulation. This would be of course in some basement o hobby room of someone’s house perhaps in the mid 80’s and there would be nothing else that we would want to do. 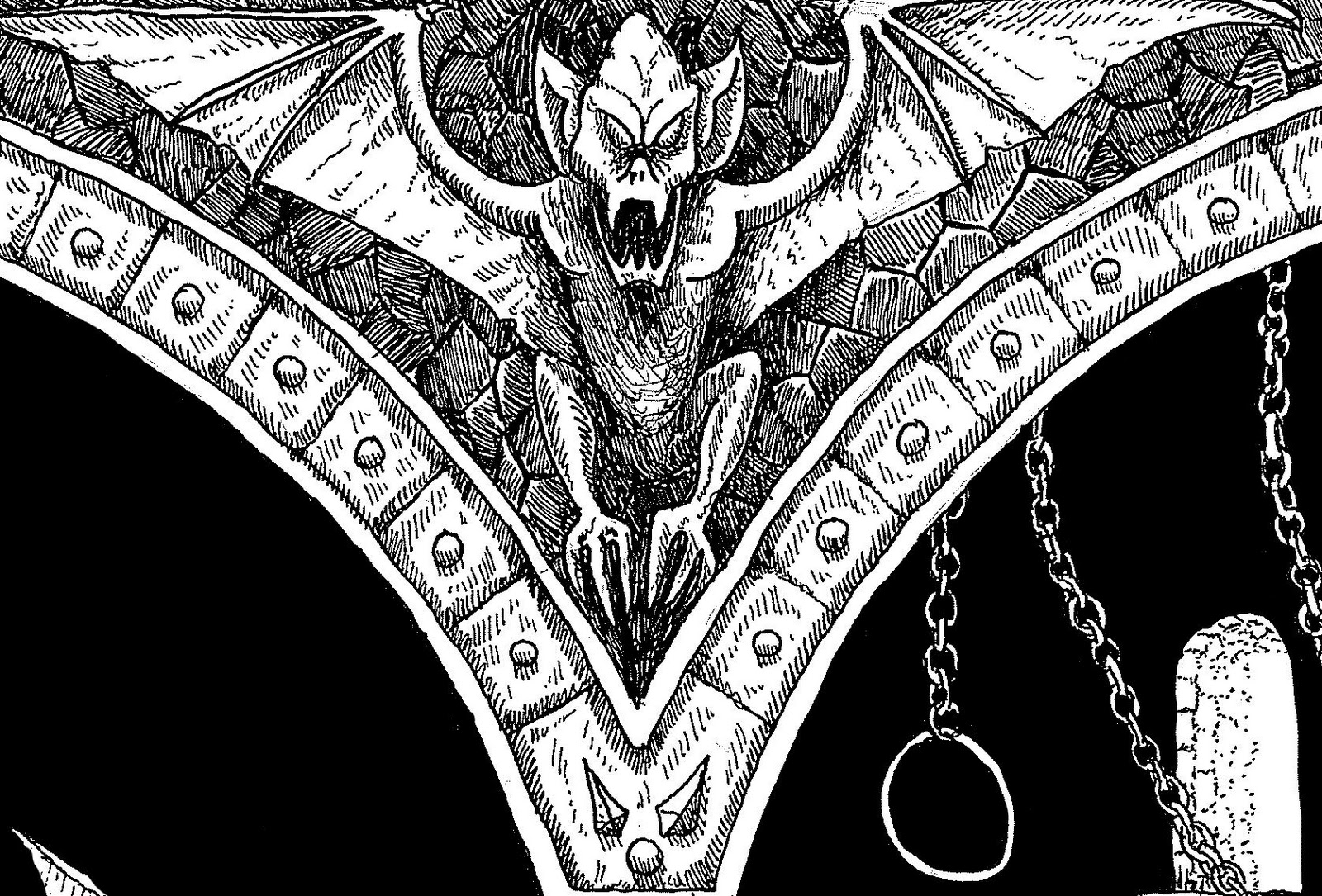