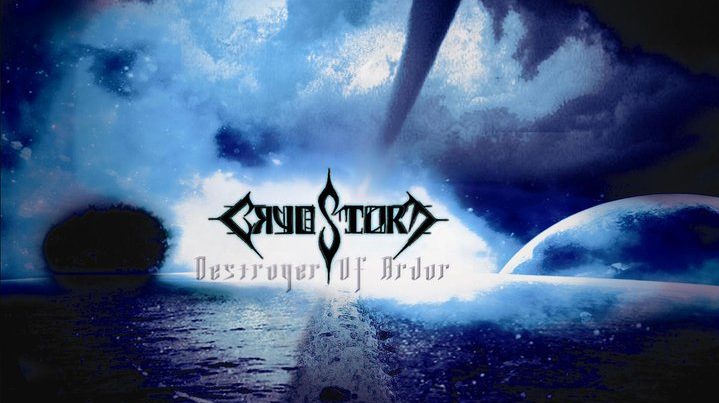 A pleasant surprise hit our inbox last week as CRYOSTORM sent the sophomore release from their Exeter UK-based melodic death metal outfit. It’s an EP called Destroyer of Ardor, which came out last year. Now I was quite ready to be disappointed when I read “new melodic death metal.” For reasons unknown to me, I’ve had a string of bad luck locating quality new MDM bands. I don’t think the genre is suffering from a lack of good bands, it’s just a big area of growth for metal, and with that–comes a lot of lackluster stuff. Stuff that I seem to have a knack for unearthing lately.

CRYOSTORM just broke that streak. Immediately this album grabbed my attention. To be honest, I’m kind of a whore for well-placed sweep picking and clean guitar work in general. When it comes out early in the album, you have my attention. The opening track “Cryostorm” works as a good synopsis for the release and that’s a good thing because it’s a great track. Perhaps the best on the album. It makes a firm statement that the band wants to have distinct rhythm and lead tracks instead of a more blended approach. I dig this. It allows you to make a choice as to which guitar track you primarily want to hear at any given time by disciplining you ears. It’s then fun/interesting to switch and concentrate on the other.

In my mind, there are two main approaches to melodic death metal. One is fast and riffy with overarching lead melodies and a slightly higher vocal register. This types tends to express anger, aggression or fear. The other is slower and heavier with overarching lead melodies and a lower vocal register–which lends itself well to melancholy, despair or nature themes. Neither is superior, it just depends on your mood. CRYOSTORM is of the first type and they really get you in that special, ready-to-rock mood so characteristic of the releasing of aggression. “Solacing” is probably my second favorite song on the release. It maintains that uptempo drive but also experiments with a smooth, bendy, guitar-lead before launching into a serious shred tap and sweep solo over blasting double bass.

I’ll be looking out for a full length from CRYOSTORM. There’s a potential here that might allow them to break into the 8 and 9 Hammer range at some point. They immediately reminded me of a Swedish band called THE DUSKFALL, which I felt had tremendous potential when I first heard their demo song “None”. Unfortunately, they never quite reached their potential. CRYOSTORM, however, seems poised to reach that next level and do some heavy touring.