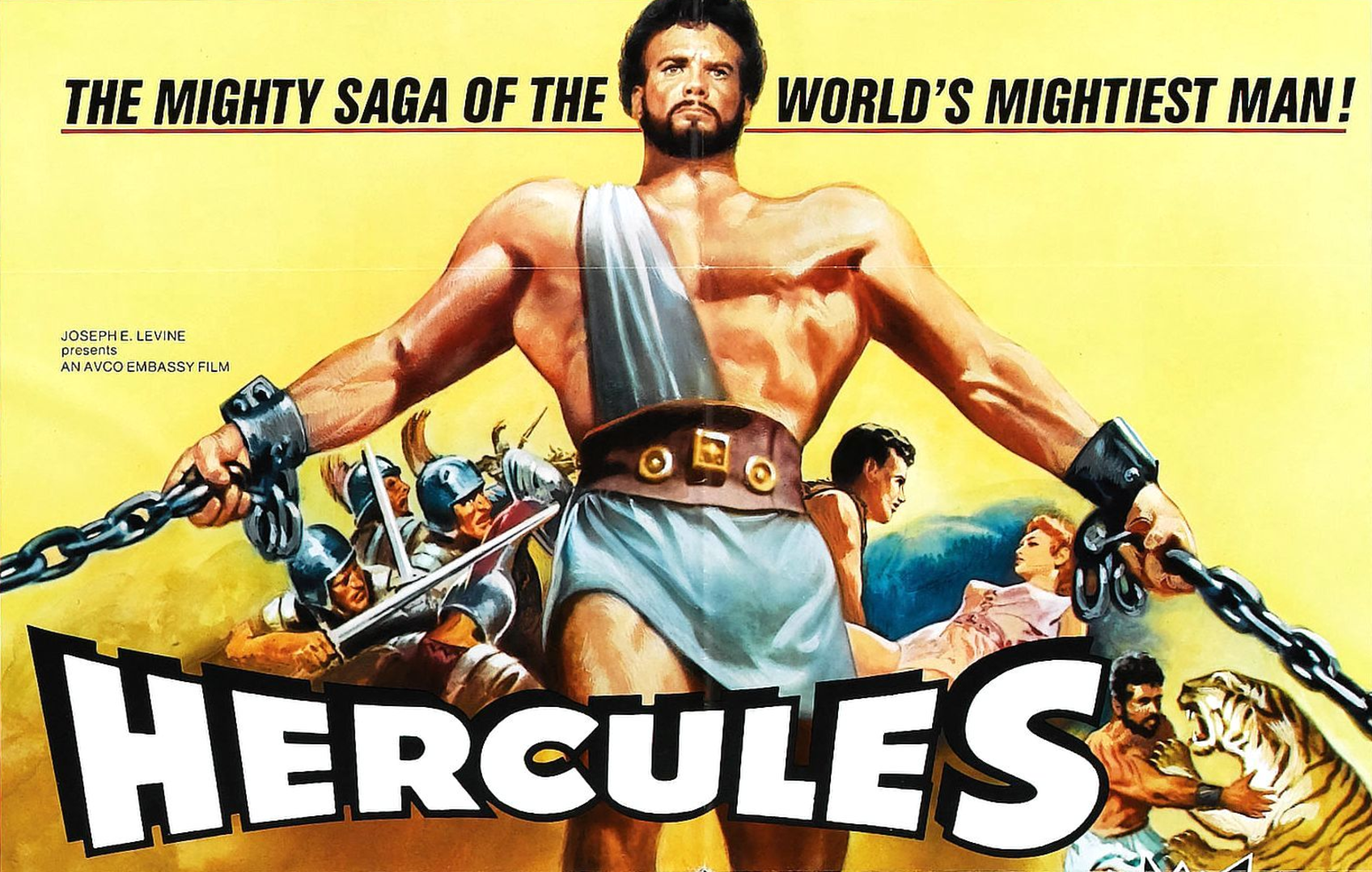 It is difficult to argue the grand scope of this 1958 film. First, it was a large production, drawing on various myths and unrelated Greek Mythology, featuring the oiled physique of bodybuilder Steve Reeves. Secondly, Hercules was the refinement, if not the genesis of the Peplum film genre, which saw an absurd amount of Italian sword and sandal films produced between the 50’s and 60’s. Seriously. Looking at the list of costumed biblical, Greek, Roman, Viking, and swashbuckler drama that was produced before the rise of Spaghetti western is near insane. The almost 100 films that were made in the short time period between 1957 and 1968 really began with a strong guy, without a shirt, picking up a tree to save a princess.

Hercules is a long film, at least it feels long. The story takes the myth of Jason and the golden fleece and shoves in the heroic deeds of Hercules as an extra. Hercules, who is just hanging out by the side of the road, saves Princess Iole from a runaway chariot. Iole fills in Hercules about the events that are plaguing her kingdom, including the theft of the golden fleece following the murder of her uncle through some unknown means. Hercules, who is already on his way to tutor Pelias’ son Prince Iphitus, decides to accompany the princess and thus sweep her off her feet. The next section of the film is Hercules doing great things, including impressing shirtless male admirers and emasculating haters. Prepare yourself for unnecessary feats of strength.

When I mentioned that Hercules is a side character, I mean it. The film follows the rise of King Pelias, who murdered his own brother to ascend to power. After learning of a prophecy that a one sandal traveler would arrive to destroy his kingdom, Pelias freaks out when his nephew, Jason, arrives to town with one sandal. Rather than slay him, Pelias is urged to send his nephew away with a bunch of other famous Greek heroes to retrieve the golden fleece from the land of Colchis. Oh yeah, and Hercules is sent with them because he killed a lion that happened to kill the whiny ass Iphitus and now poses a political threat to Pelias. Thus begins the main narrative of the film, which is actually Jason and the Argonauts.

Despite Hercules really being about something else entirely, it still fits into the tradition of the Masicte, which is akin to the larger-than-life hero doing things normal people are unable to accomplish. When I said Hercules is the genesis of the Peplum genre, it was really conceived in the silent film era with strong characters doing things ordinary men could not. There is a feeling of masculine dominance that runs throughout Hercules and films like it. Hercules is the unbreakable and unwavering hero who even renounces his immortality at one point to do heroic deeds as a mortal. Additionally, he isn’t hampered by loose ethics or logic, he is a superhero whose strength is just the physical manifestation of a perfect mold. Though he is just a side character along for an adventure, Hercules is always the one that gets his companions out of trouble, finds the important plot points, and kicks the shit out of people who deserve it.

The group of heroes find themselves marooned on a paradise island inhabited by Antea and her Amazonians. The group senses trouble when the women give a suspicious history of how all their men died. Because the women offer entertainment and tons of wine, most of the group decides to ignore the obvious warnings of death and more death. Jason falls in love with Antea but soon finds himself fleeing the island with the rest of party once the all-day party turns out to be not conducive for their health. The Amazonian myth is actually tied to Hercules and his labors, when he retrieves the girdle of the Amazonian queen Hippolyta, but then again, this isn’t really about Hercules. The time spent with Antea is a long and seemingly unimportant stopgap before fighting what is suppose to be a dragon who is guarding the golden fleece. Jason retrieves the fleece with a message written on it by his dead father, urging him not to take revenge for his death. I am sure this is not going to happen. The group sails back to Iolcus to what I am sure will be a warm greeting.

Hercules only looks big when in a group of smaller dudes. Just joking, Steve Reeves is jacked.

The end of the movie sees, perhaps, the most amount of large scale action. While the film had Hercules wrestling with wild animals, including a bison disguised as the Cretan Bull, the return of Jason and his Argo passengers leads to Pelias stealing the fleece and imprisoning Hercules in a dungeon. The Argonauts are cornered by Pelias and his royal guards as they attempt to execute them for something silly. Hercules breaks out of his chains and proceeds to kick numerous royal asses with chain whips. For 1958, this climax is pretty exciting as he ascends a palace wall and rains down on motherfuckers who deserve punishment. Jason becomes king after Pelias commits suicide by poison. Big H then sets sail with his love and others for a myriad of new adventures.

I wish I could say this was the original and best film of what is to be a shit ton of more movies. I would hope that Hercules is the progenitor of subpar clones. The cloning aspect happens almost immediately as Hercules Unchained, the sequel to this film, isn’t anything past campy fun. Steve Reeves looks amazing in the Mediterranean sun but is nothing more than a beefy protagonist. While Hercules is fun, it is no way on the same echelon as the American films, like the Ten Commandments, that it tries to replicate. The dozens of films that came after Hercules would reach an absurd level of low quality, eventually seeing the protagonist fight against aliens. At times, I wish that Hercules was better, but my enjoyment of this film kept it at least passably entertaining. Let us see what this stud muffin gets into next.