MANOWAR – The Lord of Steel 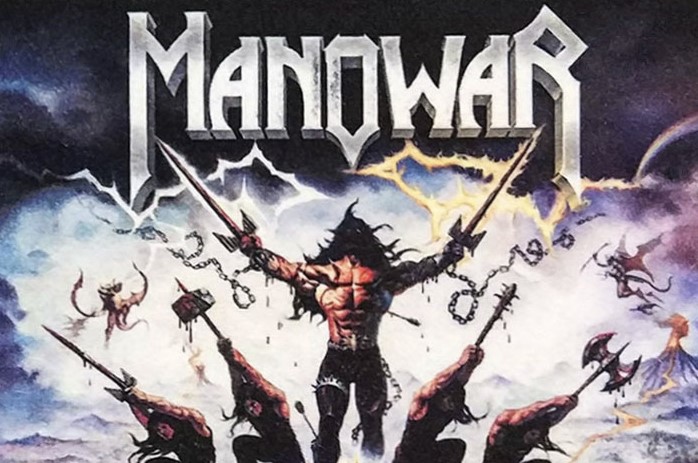 The fact that I have more than a day’s worth of Manowar’s music is both impressive and confusing. I recently wrote about Rhapsody (of Luca Turilli’s Fire Thundercross Dragonslayer) and how they were one of my first metal bands, with Manowar being the second. It is interesting comparing the two because the way I felt about both bands then, with similar affection, is the exact opposite of the way I feel about both bands now, in which I have opposing feelings. The Lord of Steel is the Manowar’s 12th album on the anniversary of their third decade of continual production. It should be a glorious occasion for Manowar and for me who has spent a great deal of time with the band. Why do I feel so different than I used to?

Manowar, for me, began as a joke. Their brand of epic battle metal was a walking cartoon that allowed me to enjoy heavy metal for its stereotypical absurdities. This is why I still believe people enjoy Amon Amarth and Dethklok, but that is a topic for another discussion. For Manowar, the grandiose approach to hyper masculinity and high fantasy was everything I could want in a metal album. It became an inside joke with my friends and would adorn many of our social gatherings. Over time, as to be expected, the irony waned and I began to enjoy Manowar’s records without any sort of laughter. It wasn’t until I stepped back that I understood what Manowar was and what it could truly be for me.

Manowar has always made records the way they wanted despite three decades of critical disdain, negative opinion, and reasonable logic. It is the negative criticism which I truly believe makes the band who they are. The fact the Manowar has never been wavered by popular opinion only strengthens their brand of mythological optimism which is cast as fantasy themes within their records. Their battle hymns become a metaphor for journeys through landscapes of uncertainty. I have said before that Manowar became a beacon for my own life and provided an endless well of positive emotion which has steered me, in my own personal endeavors, for many years. It still makes me laugh, but Manowar has allowed me to continue my pursuit in this world, emotionally and artistically, and given me more guidance than any other band in my life. This is why I am upset when the band systematically disappoints me with recent releases.

The Lord Of Steel marks a new chapter for Manowar following a decade of weak performances, managerial bickering ,and extended absences between records due to endless European touring. The Lord of Steel welcomes back Donnie Hamzik who originally provided percussion on the band’s 1982 debut as well as the re-recording of the same record two years ago. Rather than continue with the symphonic direction displayed in 2007’s Gods of War, which was originally intended to be a series of mythological concept records, the band returns to a bare bones masculine rock album with Lord of Steel. 2012 or 1982? You decide.

In all honesty, the Lord of Steel is not that bad of a record despite reasons we will be exploring further. The band strips its past excesses by returning to the raw roots of heavy US power metal. The sound is clean and polished and full without the necessity of orchestral European backing. The band does a complete makeover and presents a sound that is strong and clean. The return to this underrated US style of metal, which raged during the 1980’s, is admirable. Whether or not Manowar is intentionally paying tribute to the like of Savatage, Omen, and Attacker is still up for debate. Regardless, Manowar leaves their fantasy garb at home for leather, fire, and steel. I should be excited as hell for an album that possibly has the spirit of a revving American made motorcycle. Fuck, I am getting there. I just wish the songs were better.

While Manowar has everything, in terms of production, locked down to a science, the spirit which made them so great in the first place is nearly absent. While there are some promising songs like the clear headed “Touch the Sky” and the slightly traditional doom melody “In Righteous Glory,” the majority of Lord of Steel is more of a chore than entertainment. A chore in the fact that one has to weigh their love for a band against a continual turnout of mediocre product and thus is faced with the possibility of having a major part of their life challenged. -Sigh-.

The middle section of Lord of Steel becomes a walking cartoon but never in the good way nor the bad good way rather the humorlessly bland way which is never fun or exciting. The cardboard anthems like “Expendable,” “Blacklist,” and “El Gringo” fail to inspire any sort of joy or optimistic escapism. Rather than craft something new the, band sleeps on their laurels with plagiarized ideas such as “Manowarriors” and “Hail and Kill and Die.” While the band’s self congratulatory nature has always been a part of their previous charm, the celebration for Manowar is far exceeding the reasons for celebrating. I almost wish the band would have continued with the failed cycle of mythological tributes rather than what they have become: a soundtrack to b-list action films which never passes above a forgettable moment. Manowar is better than that.

I feel strange being critical of this record because of my previous history with the band as their critical downfall was allegorical to my own sense of crippling doubt. I have lived long enough to see myself become a critic to Manowar and their continual artistic path. I almost want to take it all back and return to the time when I felt positive about everything. I feel a relationship with one’s favorite band is full of as many lows as soaring highs. Regardless of what Manowar does, I will always follow them, but will never shower them with praise unless merited. Manowar does have a genuine history of strongly crafted records as well as personal favorites which have failed in critics eyes. The Lord of Steel is neither one of them. Despite being underwhelmed by the record, I feel The Lord Of Steel has matured my relationship with Manowar as we now have more of a dynamic relationship. They will continue to put out records and I will continue to listen to them. Some will be good. Others will be not. I will always consider myself a brother of metal and look forward to the day where I shall pass under the flaming arch to the Kingdom of Steel.