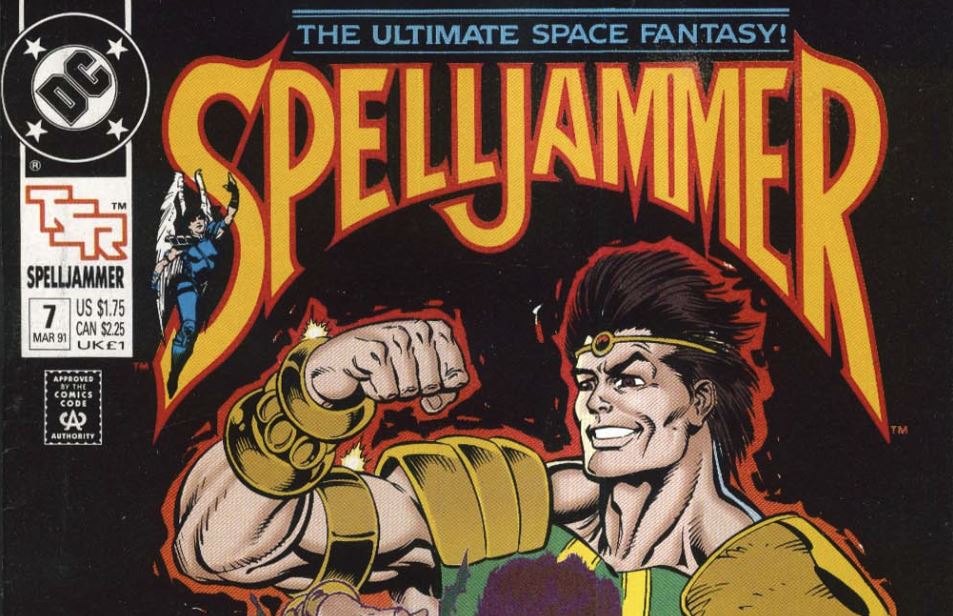 For as unrecognized and obscured as Spelljammer has become, it is a wonderful scale at which to view the cosmography of the Dungeons and Dragons universe. This is, of course, if you want to view the belief structure and technological milestones of a fantasy universe. I will of course be discussing the early 90’s comic book which is based around the ideas and concepts introduced in 1989 with the Spelljammer supplement. Before we get to the comic, let us first get our head around what it was like in the late 80’s with second edition. It would be 10 years until the third edition was out so AD&D was continuing upping the ante on the fantastic nature of the game. Players could do many things and there was only one place to go: Space.

While space travel may seem like part and parcel to any fantastic story compared to more serious literary genres, it is not really apart of high fantasy. In D&D, magic and monsters and myths stalk the land along side multi dimensions and portals to other realms but traveling into space is outside of the aesthetic medieval framework. You cant just get up and fly to the stars even on a dragon. Its not practical. There are of course exceptions and they usually turn out funky and awesome. Enter Spelljammer, a funky and awesome science fantasy campaign setting which not only introduces space travel but also ties all of the incompatible worlds together through the wonder of wild space. It was here that is is acknowledged that yes, despite there existing planes of existence, the material plane can be larger than just a world and in fact are many worlds connected by an ocean of space. How do we travel through space and what do we travel on? Well through magic crystals and on a damn Manta Ray. The Spelljammer comics ran for around one year from October 1990 to November of 1991 under the direction of Barbara Kesel, Michael Collins and Dan Panosian. I would mention the other things those people did but Spelljammer might be near the top for all of them. The comic run was apart of a media blitz by TSR which also included a computer game in 1992 and 6 novels produced between 1991 and 1993. If one was really into Spelljammer at that moment, I am sure it must have felt like the golden age of science fantasy. The first issue of Spelljammer assumes you either have read the previous comic called TSRWorlds or will sit long enough while the characters dump exposition on you. In the inaugural issue, Captain Meredith and her Spelljamming crew land on a desert planet and relate their adventures to the priestess Kirstig and her nomadic tribe, have a misunderstanding with a local warrior, and accidentally take most of the tribe on their ship onto the next adventure. It is silly, funky, and pretty much sets up the world for future adventures. The artwork and writing is great in a pulp embracing way even with classic D&D spells (like tongues) being used with the plot. If you are into obscure systems or just a mish mash of fantasy, sailpunk, and magic, then Spelljammer might be for you. After TSR was acquired by Wizards of the Coast, they allowed their funky campaign settings be set to pasture while Wizards focused on more serious fantasy settings like Forgotten Realms. Spelljammer, along with Dark Sun and Planescape, would become an outdated campaign setting. The comics are an interesting footnote to the setting but in no way are essential to understanding everything about an obscure system that no one plays. With that said, Wizards has released a few spoilers or announcements which suggests that Spelljammer might be returning either as an option playtest material or supplement one can use in their campaign. There already exists tons of conversations for the fifth edition since the fifth edition is the best at converting any sort of of material to pliability. What this means is you to can be a corsair to the stars which travel the magical ether between planets and catch the astral winds to adventure. If that happens then the possibility of the comics returning might be on the horizon but I would not get ones hopes to far in the stars. For now enjoy the weird and funky world of Spelljammer.