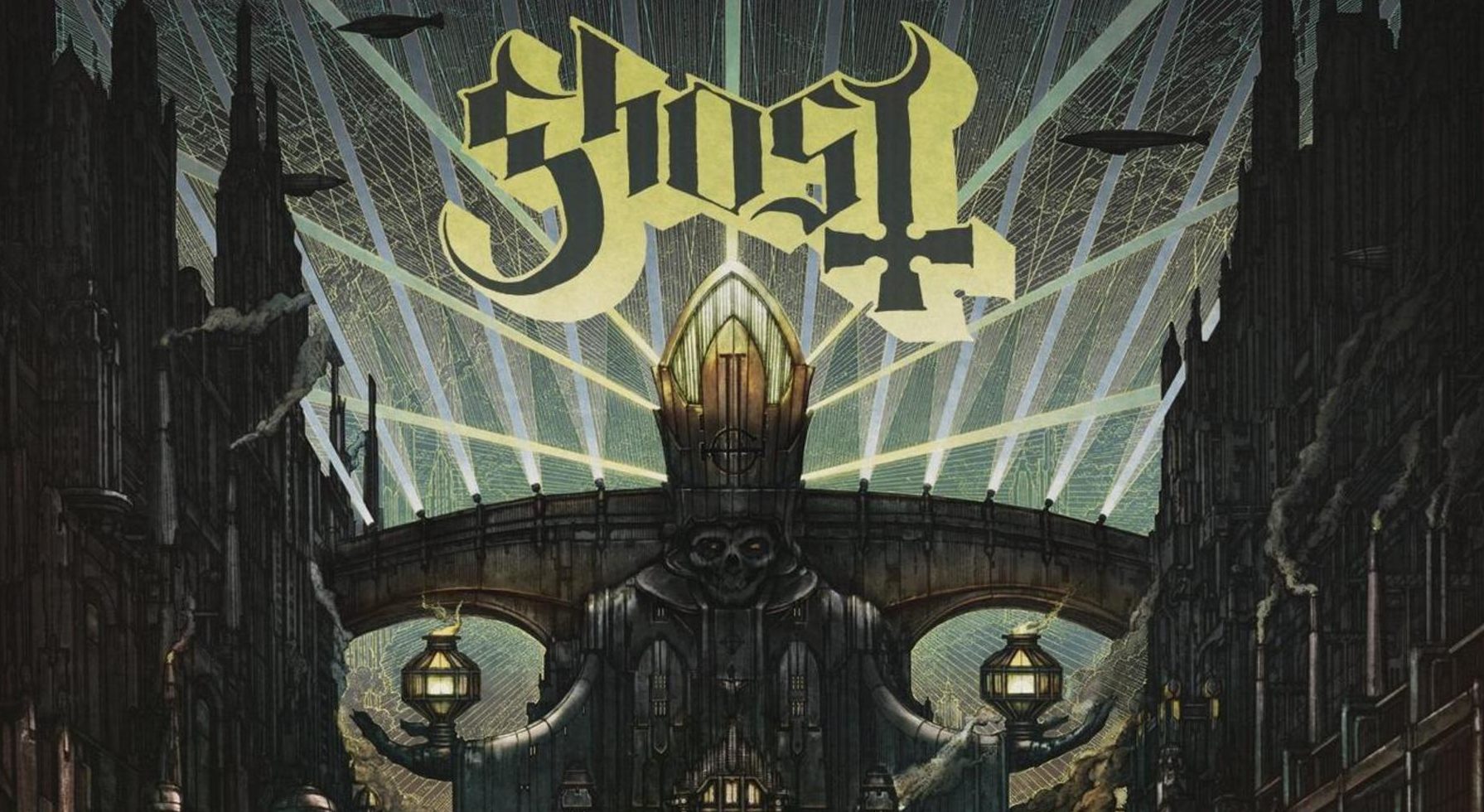 Ghost return to their fans having dropped the B.C. that accompanied them through their last release, the controversial and softer “Infestissumam”, and with it have hardened up a little. Not so much as to be unrecognizable, but perhaps (they hope) enough to placate those bored by their last offering. Personally I didn’t find it all that engaging. It was missing the solid musicianship of their debut album, though the theatrics were as commanding as ever. Exactly what you’d expect from a band headed by an evil pope and backed up by four nameless ghouls.

It begins in what might be the hammiest manner possible, with a synth intro whose heavily produced tone seems ripped straight from 80s sci-fi B movies. It’d be more explicable heading up Devin Townsend’s “Ziltoid the Omnissient” album than one lead by an evil pope, but thankfully it’s abandoned after only 40 seconds for heavy guitar-led riffing and never visited again.

The vocal style is unusual, having far more in common with classic rock than modern metal but Ghost have never been shy of the unmistakably throwback bent of their sound, nor the theatrical ridiculousness they present themselves with. What they are seemingly shy of, this time at least, is how unmistakably soft their last album was, opting this time for far heavier, grindier and, ultimately, better guitar riffs to complement their engagingly complex compositions. It’s a nice change and definitely not in the wrong direction, though I can’t help but feel at times they don’t go far enough. There are moments where it goes all a bit “easy listening” and I find myself reminded of Blue Oyster Cult, but thankfully this is the exception rather than the rule and also because the Blue Oyster Cult songs they remind me of kick ass. The Opening riff of “(Don’t) Fear the Reaper” may well have been notoriously overplayed, but you’d have to be more than a little cold-hearted to miss why. It fucking rocked.

Overall there’s a kind of Kiss vibe to their music, with strong guitar-led production and some really nice hooks, but the focus on the clean vocals of Papa Emeritus III left it all a bit soft to my ear, galvanized as it is by years of corpse-growled fury. He’s a crooner, and while his ability to hold a note is impressive, it often fails to be particularly exciting. A fervoured cackle, visceral grunt or even just a booming “Hey” would have served as much needed punctuation, and it’s a shame that it never happens. All this keeps the album from reaching the heights that it should. It’s not bad and it’s certainly better than their last, but it’s still not enough to for their music to catch up with their theatrics. Maybe next time.