Synth Bard – Beyond the Crystal Cave 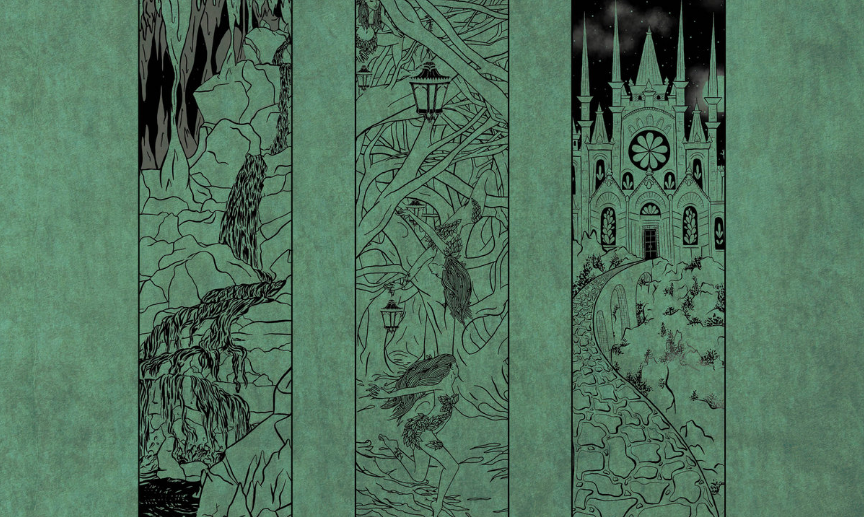 Synth Bard was one of my first discoveries with 2015’s Gold Box Renditions. Aside from being fantastic fantasy synth, Goldbox Renditions was a tribute to the music found in the series of CRPG games published by SSI from 1988 to 1992. This sort of uber niche themes was part and parcel for an artist whose repertoire seemed to be rooted not only old school RPGs but deep speculative fiction. More so than playful reverence came a desire for the artist to fully immerse themselves in a world. The artist’s next record, The Unofficial Soundtrack to Ravenloft was evidence for not only for more speculative fiction but multi faceted tributes to the famous icons of fictional worlds. The Unofficial Soundtrack to Ravenloft was an album dedicated to the Dungeons and Dragons campaign setting and was accompanied by a booklet with illustrations and flavor text. Beyond the Crystal Cave does what Ravenloft did just now dedicated to a 1983 module set in the world of Greyhawk. If anything can be gleaned from past records, it is dedication to excellence and source material. Beyond the Crystal Cave, the module, is famous in some old school RPG circles while still obscure in pretty much everything else. $Regardless of your familiarity with the adventure, Synth Bard is here to tell you things with an excited zeal that is infectious and eternally charming.

Fleeing from their feuding families, two starcrossed lovers sought refuge in the Cave of Echoes, fabled in legend. Desperate for the return of their loved ones, the families are offering a large reward to any band of brave adventurers who will enter the coves in pursuit of the couple. But will bravery be enough? For who knows what lies beyond the Crystal Cave?

The flavor text for the 1983 module comes with a very familiar hook. There is something a dangerous location which needs to be explored and there is problally some glory and reward for anyone willing to expose themselves to the unknown. The setup for the 1983 Advanced Dungeons and Dragons Adventure Module Beyond the Crystal Cave is familiar since it has was already iconic for Dungeons and Dragons then which only continues to be canonical today. The exploration / bounty hook is an accepted anatomy of adventure as players need little to no reason to throw themselves into dangerous caves. The hooks only serve to play into the fun and excitement of power fantasy. Beyond the Crystal Cave however provides a unique angel to the hack and slash exploration of early RPGs as it encourages non violent solutions. From the module, the early pages suggest that

“It will quickly become apparent to the DM that this is no ordinary adventure. It is possible for a group of 1st level characters to wander gently through the garden and succeed where a bullying group of 6th level characters could well fail. Diplomacy and tact will win the day where violence and agression will lose it.”

While Beyond the Crystal Caves does have normal kick in the door encounters, the emphasis on diplomacy and role playing encounters is an early example of the balanced ecosystem of activities that D&D would strive for. Its embrace of logic and mental puzzle solving within a social encounter is interesting given the few decades it would take to reach a symbiosis of activities. This 1983 module served to be a roadmap for the future and as of now it has a majestic and hypnotic soundtrack.

The discussion surrounding the module is important to the record as this is not a place for casual RPG references rather investment into the hobby and veneration for important milestones in its history. The unique nature of the module is animated by Synth Bard’s 45 song soundtrack which both pays homage and adds to its own lore. Compared to Ravenloft, Synth Bard has taken a more melodic approach which leads to compositions that are narcotic in its tempo. The fairytale nature of the entire cave is narrated by the synth instrumentals which both possesses a whimsical attitude as well as moments of quiet tension. As with the nature of the module, there are moments of fancy and dreamlike wonder as well as times where mudmen come and attack you. Synth Bards balance of both melodic and dissonant melodies makes this record not only enjoyable but one of the most accomplished albums in this artists career.

Since the Goldbox Renditions, I have continually been impressed by Synth Bard’s ability to experiment in the tones of consonance and bring each of the subjects to life. While the pattern for each of the releases seems familiar, there is an almost limitless exploration of written material ready for this artist and others. Though I support different avenues of exploration, there is something comforting about having a familiar setting and adventure illustrated in comforting sounds. Songs like “Unicorn Meadow ” are joyous to experience and give me a sense of peace which initially drew me to this style of music. This is escapism incarnate and Beyond the Crystal Cave provides the beginning of an adventure which takes place on multiple dimensions of sound and sight.

Synth Bard contacted me to let me know about this record. Though I haven not been keeping up with the newest Dungeon Synth releases, I am pleased I am still thought of regarding the continuation of some artists. Much like the contact from an old friend, records like this give me a sense that my time spent with the genre was positive as I seem to have made correspondence and connections which lie across the spectrum of reality. I say this since Beyond the Crystal Cave seems to have been written from a friend sent from another world beginning me to visit. I believe I will.