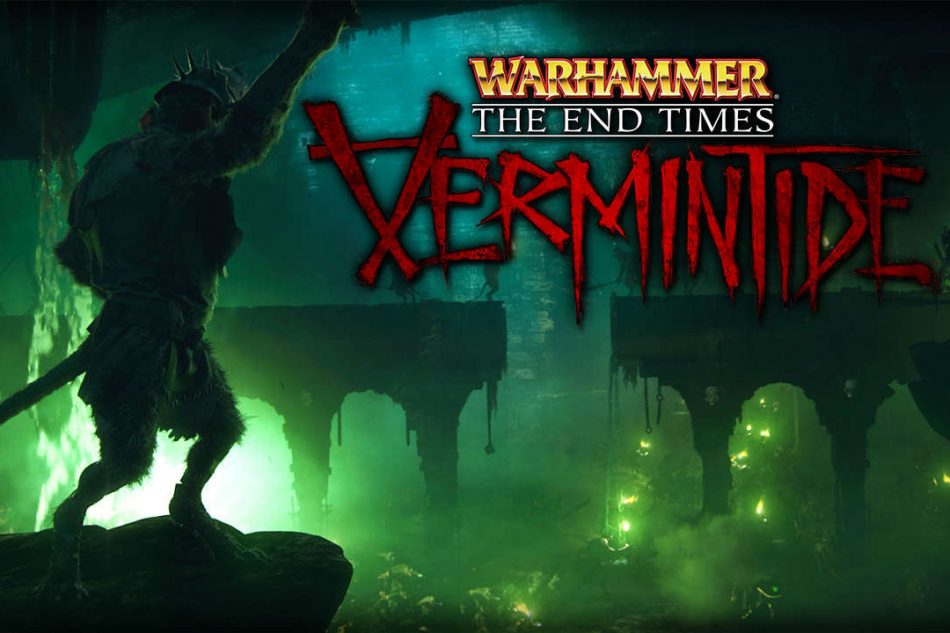 For reasons that probably involve an endless lust for cash, Games Workshop recently murdered their entire fantasy setting in a tide of snivelling rat. This made a lot of people very unhappy and has widely been regarded as a bad move. This is partially because that was a world with a rich and involved lore that now no longer exists, and partially because its fans had spent hundreds of dollars and hours building a plastic army that is now worthless in the current world. That and the addition of fucking magic space marines.

Vermintide: End Times is like a big sloppy farewell kiss with that beloved dead world, a long awkward make-out in a relationship that you know is doomed, but if you close your eyes it feels just like the good old times. Except your partner has a bit of a cold and every now and again they cough into your mouth. You know it’s not their fault, but you still need to take a moment every now and again. Each character has their own play style, specialisations and, most importantly, ridiculous hats.

Less disgustingly, It’s a well put together co-op ratmassacre whose occasional bugs don’t do enough to detract from the inherent satisfaction or staving a ratman’s head in with a mace. Set wisely in the much loved realm of Warhammer fantasy, its main attraction for me was the promise of kicking seven shades of screaming piss out of the vile bastards fictionally responsible for murdering a universe I loved. Of course, the setting means everything’s hopeless, but that’s hardly new for Warhammer; they’ve been trading solely in valiant last stands and the unceasing machinations of dark gods for twenty years, so the knowledge of your own imminent death is just more of that well known Warhammer spice.

As an homage to Left 4 Dead, it’s a good one. The addition of monstrous rats over zombies is welcome for no other reason than how overused zombies have become. Ratmen feel like a refreshing change of pace to the more traditional shambling horror while making a whole lot more sense. Zombie fiction glosses over the question of how you you’ve survived long enough to find assault weaponry while everyone else perished immediately, who set up and then abandoned the saferooms and why you can survive a zombie bite without infection. Swapping out the shambling horde with ratmen answers all these questions as well as allowing your villains more personality slowly mouldering meat. The selection of places you’ll slaughter ratmen is truly spectacular.

Vermintide uses the same basic formula, but with some nicely thoughtful tweaks, keeping the basic game play structure of co-op short missions with various objectives and adding the irresistibility of permanent loot drops. Your ability to hunger after the right stats on a war-hammer or a nice shiny new wizard’s staff is going to determine, in broad strokes, if this is a game for you. Everything is gear based and gear is infused with so much randomness that it’s quite possible to have your favourite character overloaded with legendary loot or absolutely penniless into the forty hour mark without either outcome having very much to do with your actual skill. There’s ways to weigh the dice in your favour, but dice they are, any anyone familiar with the source material knows just how unhelpful they can be. Each tier of this loot isn’t as clear an advantage as you’d think, but you’ll still find yourself judged by internet strangers if your hammer and shield combo is only uncommon. This is further compounded by the perk system, which is the real reason rarer weapons are more valuable; less common gear has fewer perks and, because perks are determined by the all-powerful diceroll, fewer perks means fewer chances to get something decent. The levels of randomness mean it’s entirely possible you’ll get a uncommon weapon with a really nice perk early on, and then still be using it hours later because, despite the increasing pile of legendary war-hammers in your inventory, none of them have the right blend of perks to make them as effective as the ugly thing you’ve been hefting. And because your co-op partners can only see the ugly state of your undervalued weapon, they’re more than a little likely to assume incompetence on your part and kick you before you can demonstrate the understated might of your 10% heal on kill tenderizer.

You can’t blame the devs for people being dicks of course, but I feel comfortable blaming them for not assuming they would be. There’s the promise of new and exciting fixes for these issues in the form of free patches but they’re yet to arrive and, hey, the game is finished. What they choose to add later might fix my issues, but they just as easily might not.

So is it worth it? I feel comfortable saying yes. There are a couple of mis-steps but the devs seem earnest in their desire to fix them and the core gameplay and the heavy thunk of hammer on skull is pleasingly weighty. Satisfying enough to ignore the occasional phlegmy cough.