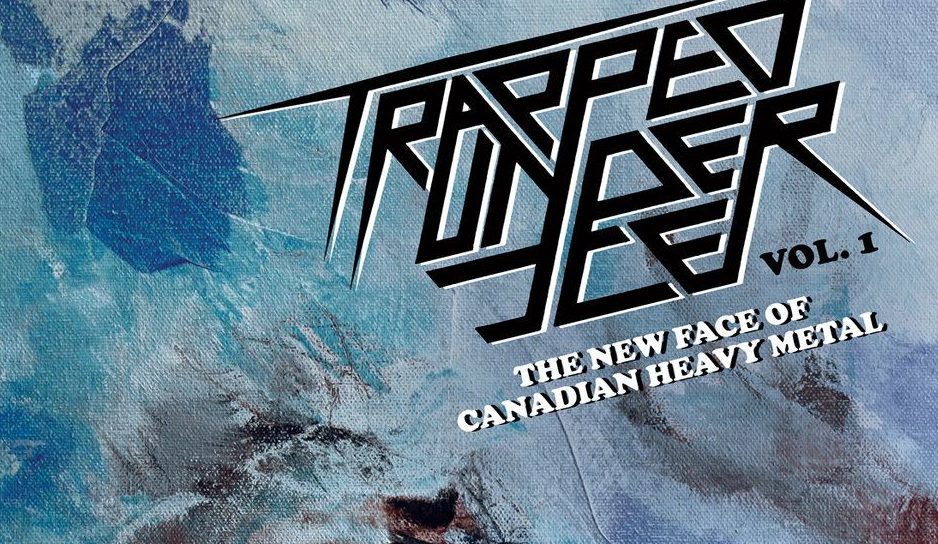 When it comes to metal, Canada has a distinguished legacy and a thriving contemporary scene. From Voivod, Anvil, Exciter, and Annihilator to some of my personal favorites like 3 Inches of Blood, Unleash the Archers, Striker, The Order of Chaos, and Blood Ceremony, Canada has been sending heads banging for decades. Now Temple of Mystery Records shines a light on some of the lesser known ranks of the Great White North metal legions.

Trapped Under Ice Vol. 1 is a compilation boasting ten tracks from a diverse roster of underground bands, and from the artwork and the logos on the cover you are instantly assured that this is a no crossover poser bullshit release. Thankfully, the music holds true to that promise. Let’s listen.

Newcomers Traveler approach the daunting task of opening the album with great confidence and let loose a fast-paced trad metal beast complete with twin guitar harmonies and raspy high-pitched vocals. Traveler have an album coming up next month, and if Betrayer is any indication it will be a stunner.

I’ve been waiting to hear more from true metal stalwarts Metalian since their excellent album Midnight Rider from 2017, and the frantic scorcher Streets of Fire does not disappoint. If anything, they have upped their game even further with a tight production and exquisite vocal arrangements. This is killer.

A decidedly sinister riff sets the stage beautifully for occult doomsters Cauchemar, who impressed me with their latest album, Chapelle Ardente, from 2016. Comme un Poignard takes the tempo down a bit and being in French is a refreshing Québec addition to the compilation. Fans of The Devils Blood and Blood Ceremony need to pick up on these guys.

Occult Burial make sure you don’t get too comfy and shake things up with their blackened take on speed metal which goes down really well with yours truly. Fight for Survival certainly has me eager to hear more and fortunately the band has several releases under their rivet belt with a new one coming soon.

Kicking off their song Demons with a sample from Lamberto Bava’s wonderful schlock horror film of the same name, Starlight Ritual certainly know how to set the mood for nigh on five minutes of ripping old school heavy metal. Riffs and vocals remind me of Swedish band Enforcer which is by no means a bad thing.

Mellowing things out just a tad, Freeways treat us to Heavy Rescue, a real groovy gem with soothing clean vocals and riffs reminiscent of Kansas. Great chorus, great classic rock vibe. Their 2017 EP has been sitting on my Bandcamp wishlist for too damn long – time to fork over those measly 3 bucks!

Barrow Wight is the unlikely pairing of Motörhead and Tolkien with some black metal thrown in for good measure. The evil energy and gruff vocals prominent on Morgûl Blade definitely keeps the listener entertained.

70’s prog and nwobhm devotees Spell have released two excellent albums, and their catchy contribution to this compilation, Silent Towers, is a great example of their ambitious sound.

I’m no connoisseur of black metal, so I’m not sure into which subcrack of the genre Blackrat fall, but there’s something pretty punk about their sound on From the Tideless Sea. And is that riff an intentional nod to TÝR’s Hold the Heathen Hammer High or a mere coincidence? No idea, but I dig it.

Speaking of nods, trad ensemble Emblem close out the album with what is essentially a variation on Thundersteel by RIOT. Beyond the obvious worship, Fast Rocker is just what the title implies, a blistering barrage of righteous riffage and a worthy finale to one fine-ass heavy metal compilation.

Trapped Under Ice Vol. 1 is easily eight bucks worth and sets a high bar for future installments. Keep ’em coming!