The Most Metal Magic Cards 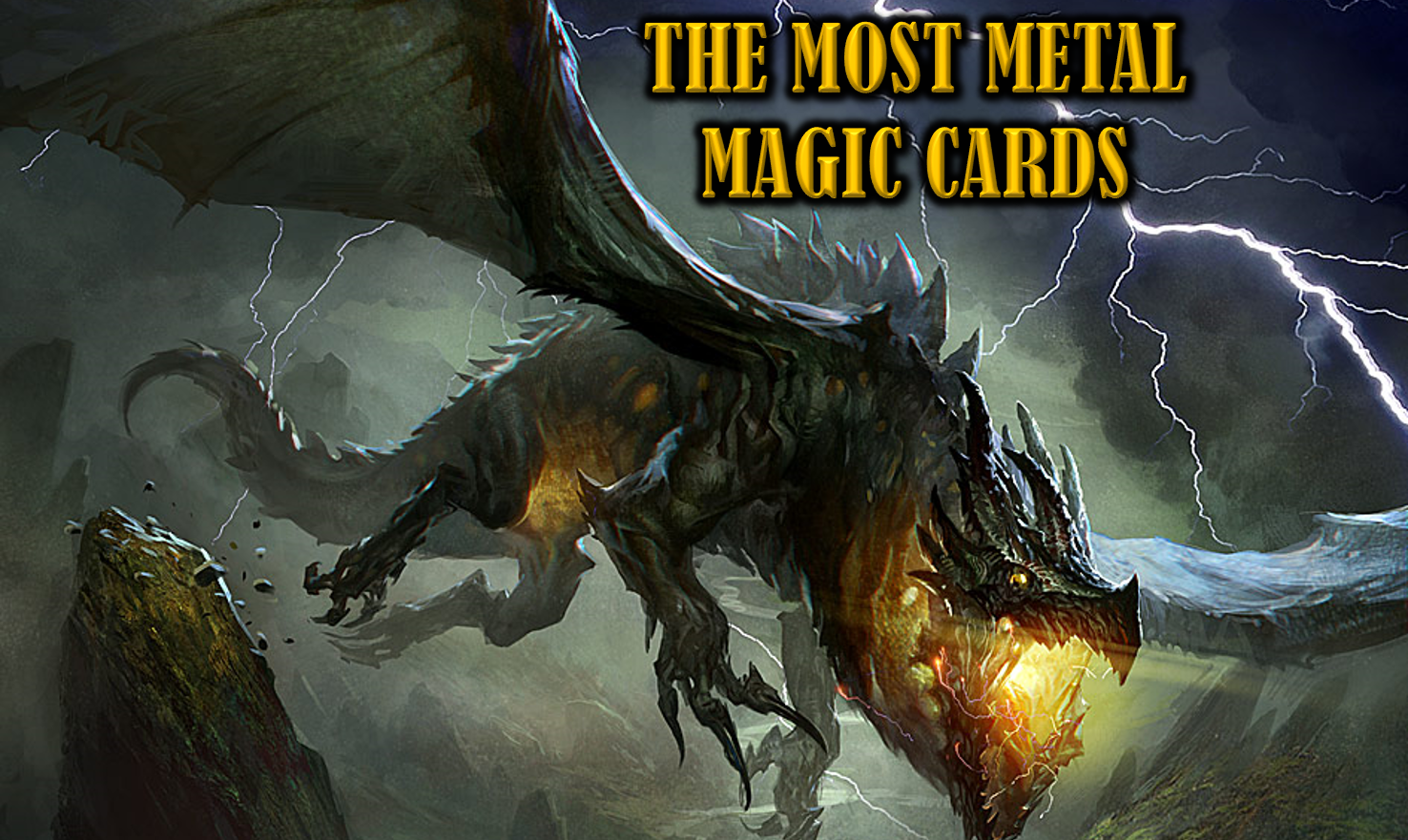 I want to talk about something I enjoy dearly: Magic the Gathering. If any card game could be said to be metal, it would be Magic. Why is this game metal? Because it can be both devastating and triumphant and filled with fantastic conflict which is fitting of the heroic deeds of viking warriors. I can’t think of any other word to describe mass death of fantasy armies or a plague of vampire hordes. Below are my favorite cards from Magic the Gathering that I think should totally be considered metal.

But hey, listen. I could be wrong. And if I am, I want to hear what you think. Tweet me @kaptaincarbon or @hollywoodmetal and tell me what card you think is most deserving of a metal title. You can even send me a copy of the card and I’ll fit it into whatever cube or EDH deck I have on hand and play with it. It can’t be something silly like Stormcrow or Sanctuary Cat though. I am not cutting out Mountain Goat for them. It is not difficult to throw a stone and hit a metal looking Magic card in black. I mean, the whole color is centered around death and destruction and skeletons and shit. This slot could be devoted to even to more tame ones like Black Cat or or Driver of the Damned. Actually, that sounds pretty cool as well. Damnation is in here because, frankly, everyone loves it, uses it ,and the scale of mass destruction this card has caused through the years, particularly since it’s reprinting, has been the source of more fantasy death than any other card; aside from Murder in casual games. Also, look at that fucking artwork. It’s a black hole or sun sucking in everything. This is ten times cooler than Wrath of God, which the artwork takes after. It could be a black metal album cover. Now I know that you could make arguments for any of the other Praetors as being equally devastating (except for Sheoldred, Whispering One) but Jin-Gitaxias is especially nasty because it makes you discard your whole hand and your opponent gets to draw 7 cards. Plus, if your opponent has either gotten the mana to get it out, or found a way to cheat it out, then the game is almost over. Jin-Gitaxias is a bitch to deal with and even overcome but more importantly, it looks like something that speaks in the language of technical death metal. Red has a bunch of cards that are completely metal in terms of punishing power. Lightning Bolt is pretty metal, especially if your hand has 4 of them. Thundermaw Hellkite is a goddamn dragon and when it is slammed on the board, and trust me, people slam it on the board, it can immediately attack and does 1 damage to all flying creatures while tapping them. I assume it creates thunderbolts that pick off flying spirits or fairies, but this is a behemoth that roars when it flies in. This is made better when you make the roaring sound as you slam the card down in front of your opponent. Green is pretty easy to find beefy creatures that would be perfect for a Viking or folk metal album, but I wanted something that was completely ridiculous. Worldspine Wurm is a candidate for a ridiculous 15/15 metal creature that pops out little 5/5’s after it dies, but that still doesn’t have the sheer lunacy of Force of Savagery. I love the ruling text on this.

“Yes, Force of Savagery has 0 toughness. It will be put into its owner’s graveyard as a state-based action immediately upon entering the battlefield unless an effect puts it onto the battlefield with a counter on it”

Now that is completely metal. All it takes is 3 mana, then some other card, and a prayer to Odin to make it work, but goddamn it, it will come in swinging with an 8, probably dying in the process. That is like an Amon Amarth song and I love every second. Yeah, I could have picked a dozen metal white cards but they would sort of overlap with other picks. Things like Armeggedon are pretty metal, but too similar to Damnation and Iona. Shield of Emeria is costly like the Praetors. I was trying to think of something that would be a part of a power metal song and then I remembered Darien. Sure, Darien is costly, and by the time you get him out, you have already taken damage. But during your darkest moment, you start getting soldiers by your side to help you up, then charge with you into battle. I love this flavor of combat so much that I tend to sit back and wait until I am below 5 life, then make a glorious Blind Guardian style charge. Sometimes it doesn’t work but hell is it fun. If you are familiar with the Eldrazi and their story, it is difficult to find any other more metal group of creatures.

“Their nature is ceaseless hunger, so they travel between planes devouring the mana and life energy until the plane’s destruction”

Their power level is also so big that at least one of them is banned in most games, and the other two are near finishers. These cards are designed to invoke a feeling of hopeless horror when they are cast.

They also look so cool that I am having a hard time believing there isn’t a metal themed band that is dedicated to their story.