Vikings: Scourge of the North 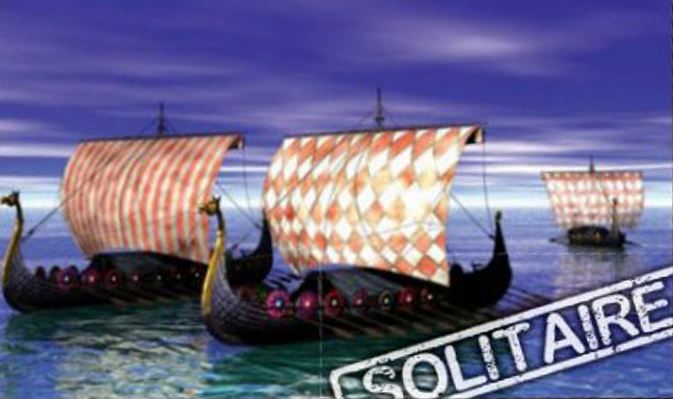 Wargaming is certainly something I never intended to explore nor is it that far away from my current interests to be shocking. In fact, aside from the historical aspect of the hobby, wargaming seems like something that is neighbors to activities like Magic, D&D, and other passionate fandoms. Since attending 1d4 Con I have developed an interest in historical wargaming but do not possess the means or desire to get into miniatures. This led me to search for alternatives that would more compact and cheaper but still retain the strategy and planning that comes with wargaming. Additionally, the promise of historic accuracy was something that was intriguing especially since more of my current hobbies reside in the realms of the fantastic and speculative. What I found also was that wargaming was a different type of expensive being that some of these games were out of print which has increased their price. Before diving into larger 2 player games which I may not have an opponent, I found a line of cost effective games that has a branch of solitaire modes. This means I would get to try out the realm of wargaming without needing a second player. Solitaire games are something that is interesting to me as a design approach and for this instance it was well worth the money involved.

Decision Games is a company which started in 1988 and currently published the famous wargaming magazine Strategy and Tactics. Decision Games has also acquired the rights to Simulations Publications which includes, if you know these, Battle for Germany (1975) and War in Europe (1976). It is okay if you do not know these as I do not either. What is fun about Decision Games is their folio series which is a line of low cost games that come with small maps, simple instruction and punch out chips that fit into usually the bag or folder they came in. The graphic design for each of these games is spartan with covers and titles looking more like an academic thesis on the subject rather than a game. Each game comes with its own pieces and ruleset, and in terms of the wargaming hobby, offers a low complexity for new players.

Vikings: Scourge of the North is listed as a game of the lowest complexity. The complexity for each of the games is based on the ruleset with this one being a very quick game. From a structural standpoint, it has a simple mechanic of completing objectives before a certain number of turns where the adventure would end. The turn order is as follows: Trade (Gold Aquisition), Leidang (Recruit), Movement, Voyage (Saga Card), Combat (based on Saga Card), Quest (If applicable), Pillage/Settlement (If Applicable). there are also additional rules for traveling in sea and recruiting berserkirs based on the religion format you have chosen. The map comes on an 11×17 recreation of 10th century overview of Europe with objectives from Africa to Iceland and these objectives range from pillage a certain number of towns to complete a certain number of quests. The player is working against a Saga Deck which represents the amount of encounters before the end of the game. The Saga deck is a stack of 5-10 cards with encounters that complicate the adventure with most of them being battles. Surprise. 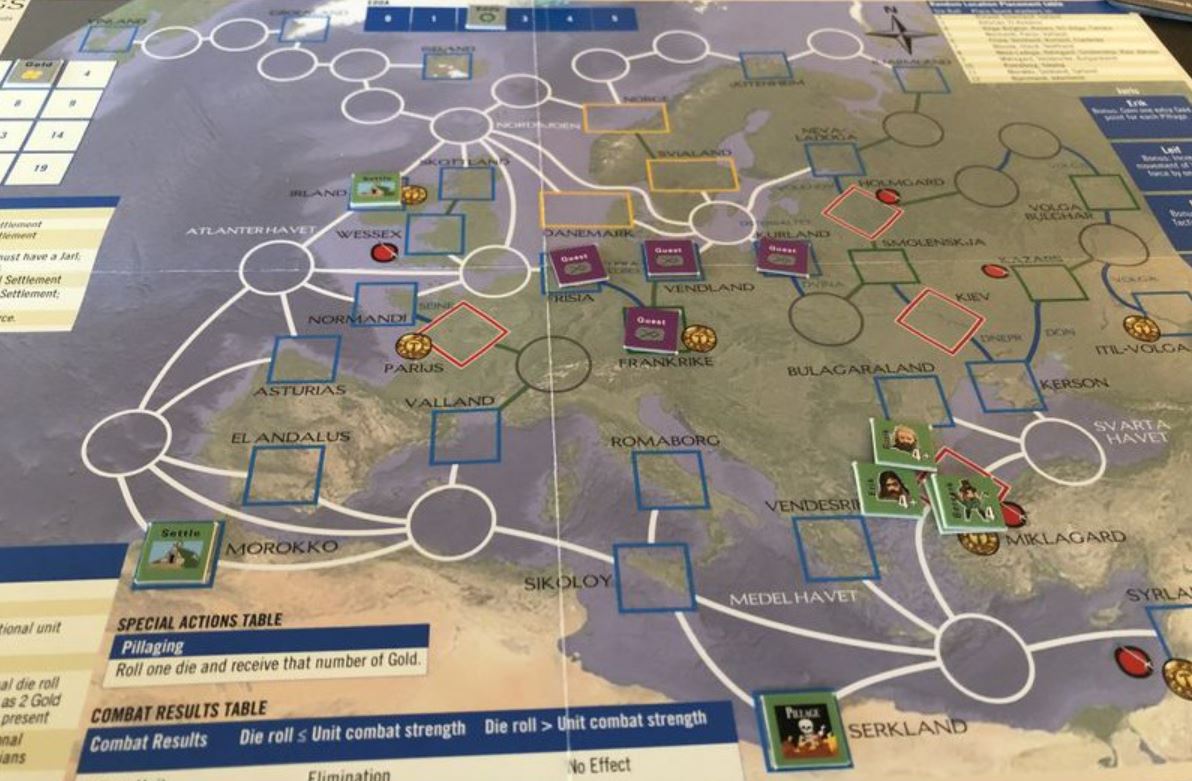 Vikings main combat system is based on counters that fight each other in turn order. For this system, each counter has an attack value and rolling a single dice determines the success compared to the value. Higher numbers equal higher rate of success and the rounds occur in turn order. The advantage roll, which is rolled at the beginning to determine order, seemed to be a crucial point of the battle where you could take out their biggest threat early and have to only work on their lower flanks. Battles are usually apart of every turn and are the result of Saga cards and sometimes the only way to complete quests. The whole act of lining up pieces and rolling for attack each turn was enjoyable despite the fact my army became too thin and eventually was annihilated by an opposing force. In subsequent games, my adventuring party was stranded too far from the objective location to complete the adventure in time. Vikings seems to work on a mix between strategy and pure luck depending on where the objective markers fall making it a short game of excitement and surface level history.

Vikings is sort of an outlier when it comes to the greater wargaming hobby. While there is a branch of ancient war thematics, getting into this hobby comes with a saturations of WW1 and WW2 themed games. Decision Games does offer a science fiction title called Phobos Rising as well as a handful of very specific moments in military history including 1964 Congo, Iwo Jima 1945, Suez 1956, Burma 1943-1944, and Khe Sanh 1968. The lack of catering to an audience outside history nerds is sort of endearing when it comes to these lines of games as they are made for a specific person who enjoys playing games by themselves. Below I am leaving a few unboxing videos made by people like myself who just are interesting in out of the way games that come in bags.