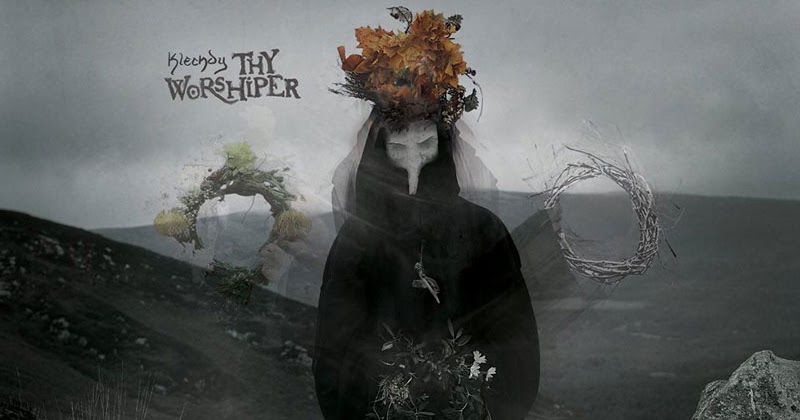 Thy Worshiper is bringing a somewhat rare breed of music with Klechdy. It’s a desolate epic metal of the sort that reminds you of ancient saga’s, stirring deeds and heroic movements, all without having to understand a single word.

It’s also the sort of thing that’s impossible not to wax more lyrical than a singing candle.

Klechdy starts off incredibly strong; minimalistic, mournful combinations of deep humming bass notes and a raw, black metal guitar riffing that wavers, unobtrusive and almost abstracted from the underlying beat. On top is echoing singing, indecipherable (at least to my monolingual ear) wailing that gives the whole thing an unknowable quality. Drums find their way in too, almost seamlessly introducing themselves at what might be three minutes into the album and might be much earlier: you’d need the aural equivalent of a metal detector to know for sure, so subtle is the work.

Five minutes into it and the growling viciousness is introduced for the first time, airy chanting trading unknowable curses with earthy grunts before both disappearing below throat singing and the mounting urgency of guitars. At this point you’re seven minutes into the first track and there’s a undeniable feeling that you might well be listening to something interesting.

It’s not a feeling that goes away. Though the tracks are eclectic in their length, with 2 minute experiments sandwiched between 8 minute sagas there’s lots to be distracted by. Each manages to feel distinct from its fellows yet consistent as an album. Even without an understanding of the lyrics to hold onto I never found myself wondering if the album had looped before it’s time. Some are fierce, heavy beats, powered by malice and despair, others are slower, mournful and enigmatic, but each, from the haunting unknowable of their vocal meaning and the pulsing, unsteady beat of guitars, paints a picture.

There is similarity, of course. Some tracks tread on each other’s acoustic toes to a noticeable degree and while never distracting, there is the constant threat of them running together for even a slightly distracted listener. There’s also basically no way to describe your favourite to a friend without sounding almost unbearably pretentious: “mine is the one where dissonant chanting meets the howling fury of electric metal and does not flinch, not the one where dissonant guitars beat furiously against unyielding vocals. Also, that voice goes ‘yo yo yo’ a lot”.

If that kind of epic metal appeals to you, the latest from Thy Worshiper is as a brave attempt to scratch that oft neglected itch: a hearty, enthusiastic storm of all that’s dark and strange about getting lost in a forest, just with more electric guitars.