Diminished by Nightmare: The Phantasmal Architectures of Monsù Desiderio 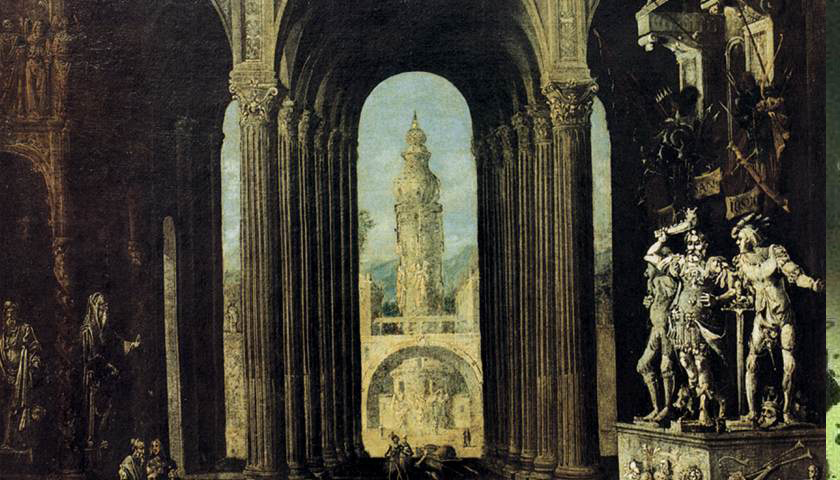 Throughout my writing tenure at Hollywood Metal, I have always been into art — specifically fantasy art. While there is much to discuss on contemporary fantasy art, I have found myself drawn to the fantastic works of pre fantasy — meaning fantasy before it became fantasy as we know it today. Since the mid 20th century, fantasy has taken on certain tropes and stylistic markings that we can easily identify something belong to the fantasy genre or at least near it. My interest in pre-fantasy comes from fantastic artworks made by artists when we had little conception of elves and dragons and sword wielding warriors. The realms of the imagination is vast and without a genre sink like fantasy, artists would fancy themselves with other forms of expression, depicting worlds of imagination where those sorts of things did not exist. This brings us to two French painters in the early 17th century whose ghostlike landscapes were collectively and mistakenly known as Monsù Desiderio.

The artists swept up in this collective were François de Nomé (1593 – after 1620) and Didier Barra, both from the French town of Metz and both working around the same time and in similar styles. The paintings from both artists are mixed with a third unidentified artist as well as help from both Belisario Corenzio and Jacob van Swanenburgh. This collective production was not uncommon for Renaissance or Baroque workshops yet the themes of the paintings mixed with the relative obscurity of the artists has cast the work of De Nome and Barra in mystery and enigma. Add to the fact,these paintings pretty only survive on Pintrest which is known for its lack of information regarding artworks and low tech art sites with a surprisingly similar amount of information.

When discussing fantastic imagery before the 20th century one usually sees that sort of subject matter attached to vehicles such as religion, dreams, or folklore. It is these arenas in which artists were allowed the cultural freedom to dictate the fantastic. This is why when an artist depicts the earthly or mundane in such a ghostly way, it is cause for attention. Additionally, when an artist seems so far ahead of his time in terms of processing art, it is cause for articles written by fantatics for the subject matter. The collected artists which would be called “Monsu Desiderio” would produce a handful of ghastly and ghostly landscapes of architecture. While their style looks to be at home with the 20th century surrealists, the fact they were working 300 years before the advent of artists like De Chirico and Tanguy is something for pause. Add the fact their relative obscurity and the combined works of De Nome and Barra are a treasure trove off macabre landscapes populated by tiny figures who are diminished by nightmares. Though the word fantastic has come to be a trivial compliment akin to similar neutered words like wonderful, the word originally held deep roots in the expression of the imagination. This is why a title like “Fantastic Ruins with Saint Augustine and the Child” is descriptive text since the adjective fantastic, in the 17th century, was an indication of illusion or broad imagination. When one further examines the title, one is left with the christian parable of St. Augustine incorrectly trying to grapple the immensity of the holy trinity with a picture that is of small figures among a post apocalyptic landscape. The original parable of St. Augustine is odd enough in its set up and delivery but couple that with De Nome’s depiction and one has a landscape that is not suited for spiritual education rather something that could be hellish in its undertones. We return to the word fantastic with Barra’s 1647 painting “Fantastic view of a Gothic Cathedral.” Here again is the deliberate attempt to cast the realm into the world of the unreal. While this may seem slightly mundane to contemporary thought the seeds of proto surrealism were sown in the Baroque era which were free of any religious or folk overtone. Here was a view of a cathedral that was distorted and contorted to unpractical proportions. There is anxiety among the figures which populate its lower half. The monstrosity of the architecture juts out over dull skies as a foreboding arm of some stone monster. Le Enfers is actually a reasonable vehicle for the fantastic as it depicts the nether regions of Hell. Le Enfers of The Hades is a surreal depiction of the underworld as tormented souls fall towards the vast niches of the afterlife. This type of fantasy was done by Bosch a few centurys before with his much publicized The Garden of Earthly Delights. Similar to Bosch, Le Enfers shows the torment of sinners as a visual cautionary tale for wayward views. What is different is the light and the perceptive as Nome’s painting invites its viewer in with an asymmetrical line of vision combined with a soft glow of light which appeared to be illuminating a ghastly facade. Bosch’s flat triptych tours its viewers among the many different nooks of its composition will Le Enfers proposes a chance to reside in its composition. Deep within the recesses of the perspective are places where one can immerse themselves in something that is suppose to be repelling but is masterfully done and charming Fantasy view with the Pantheon and other monuments of Ancient Rome, 1737, by Giovanni Paolo Panini

The practice of constructing architecture from imagination would later be perfected, and reasonably written about in the mid 17th century with the work of Alessandro Salucci and Viviano Codazzi and later Giovanni Paolo Pannini. Whether realistic or fanciful, these landscape and architectural painters crafter scenes of buildings which lay in idyllic fantasy. From the high ages of Greece to idealized versions of then contemporary structures, the realms of imagination flourished in something as routine as architecture. Though Nome and Didier are footnotes to the Capriccio style, which is again footnotes to greater artist history, they prove important roadmaps to our idea of the fantastic.

Perhaps my largest attraction to this type of art is really grappling with the role of imagination when it comes to artwork. from the realistic to the abstract, the artist makes a contract with the world of the real and the unreal and decides how much to pull and in what ratio. Our relationship with the fantastic can be charted through art where we gingerly step into the realms of the unreal. This would eventually lead us to “low” artworks of unicorn calendars and tacky faerie paintings but in the 17th century artists were still negotiating the waters of the unknown.