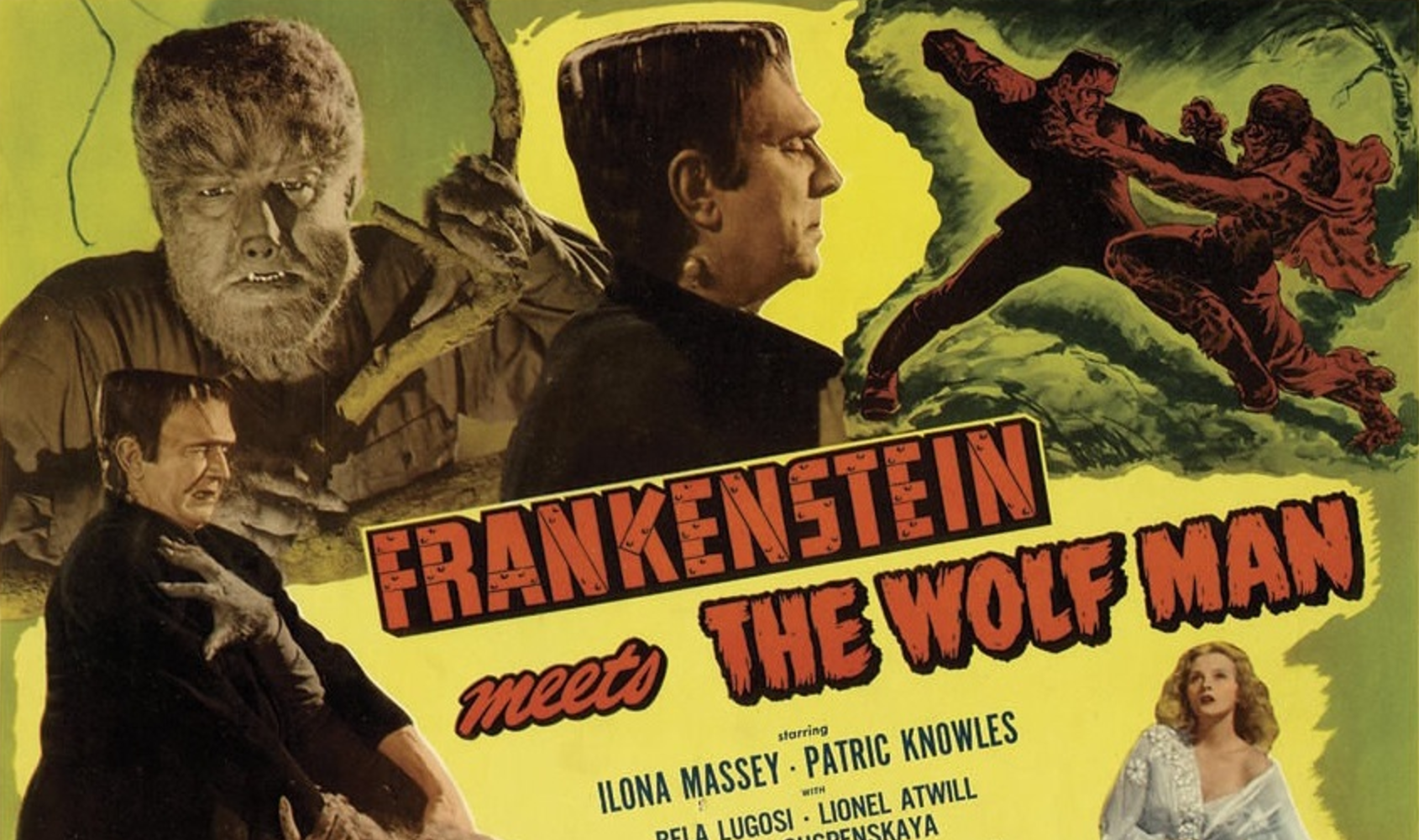 For all of the time I spend with classic horror, I never truly reviewed a monster film. Previous films watched ranged from interesting adaptations of literary horror to latent cultural fears inscribed upon film. All of these were at least original or reasonable sequels to a growing franchise. While Dracula, Frankenstein, and The Mummy were certainly films with monsters in them, it was not until Frankenstein meets the Wolfman that the genre of the monster film moved away from classic horror. It was this 1943 film in which the institutions of studio horror became so defined that its shared universe was allowed to become an illogical reality.

Frankenstein meets the Wolfman is a sequel to the Frankenstein series as well as a continuation of the events in the Wolfman, which was the reimagining of the character began in Werewolf of London. While the two characters appearing in the same film does not seem like that big of a deal, Frankenstein meets the Wolfman admits to both characters sharing the same fictional space. Additionally, the continuation of the “rally” films would sew multiple realities into one communal plane of existence. This flood of ensemble films would eventually be the primary engine for the 1940’s, with an increasing schedule of lower quality sequels. If anything, the 1940’s was an interesting time as it took the original films of the 1930’s, put them all in a room without a care in the world for structural integrity. It is not surprising that the confluence of continuity seen in these rally films would be the death knell to multiple franchises. Lets be honest, this film was created so they could do this picture.

Frankenstein meets the Wolfman assumes a lot of things. First, it assumes one has seen the previous installments of both series as it takes little care in introducing any sort of backstory. The film starts out with dim grave robbers attempting to steal valuables from the Wolfman’s grave on a night of the full moon. After Talbot (Lon Chaney Jr.), aka the wolfman, has killed and maimed, he awakes in a hospital confused and forlorn. Talbot continues to wrestle with his existence, which is now compounded by the curse of immortality. After a few more spicy action sequences, Talbot absconds in hopes of finding the gypsy who aided him in the first film for more advice on ending his life.

It is at this point where Frankenstein meets the Wolf is at its absolute best. Talbot is fixated on ending his own life and enlists the help of the gypsy woman who then seeks out the assistance of Dr. Frankenstein. The Frankenstein storyline has already been through multiple dips and dives with The Bride of Frankenstein, The Son of Frankenstein, and most recently the Ghost of Frankenstein. When Talbot and the gypsy woman arrive in the village, the castle of Frankenstein is in ruins and the townspeople are just as annoyed and pissed off as before. While the transition between two storylines may seem simple, it is a plausible crossover that doesn’t see the characters mashed without logic. The Frankenstein monster, played by Bela Lugosi, isn’t seen until halfway through the film and doesn’t play that large of a role. Frankenstein meets the Wolfman is a story of the mortal struggle of Talbot as he wishes to find a way to rest in peace. This slightly dark edge gives the film a sobering tone — something that is a highlight before the inevitable royal rumble end. Talbot soon enlists the help of Bron Elsa Frankenstein, the daughter to an infamous father. Aiding them in this whole adventure is Dr. Mannering, a busybody from England who has tracked Talbot to Franksteinville. The plan is to take the monster, who was found frozen in an ice cave, and Talbot and ultimately drain the life essence from both of them. Listen, the science isn’t all that great but it allows for the unfortunate coincidence of the experiment needing to take place during a full moon. For fucks sake guys, does no one own a calendar or know anything about werewolves. Add to this the growing discontent from villagers who are just tired of this monster shit.

Frankenstein meets the Wolfman has its share of flaws. Bela Lugosi was absent for most of the filming so a stunt double was used. Regardless, the actual character of the monster in the film could have been replaced with anyone else. The Mummy meets the Wolfman, The Invisible Man meets the Wolfman, The Invisible Ray meets the Wolfman. The last third of the film gets so excited about the two finally fighting that it runs off the rails. Dr. Mannering is suddenly consumed with the desire to give the half frozen and sleepy Frankenstein monster full power just because. Why not revitalize this killer monster? The local drunk announces loudly that he wants to blow up the dam and flood the inhabitants of the castle but no one takes it seriously until he actually does it. The film ends with a wrestling style fight, seeing the monster lumber while the Wolfman climbs the highest thing and luchador dives onto the easy target. Then the model castle gets flooded by a giant torrent of water but the village miraculously remains intact.

I was excited to watch Frankenstein meets the Wolfman because the idea of intercompany and cross company crossover is interesting. While this idea is a staple in comic books, seeing it played in old movies is even more interesting. Aside from the marriage of continuity, these rally films were fueled on the idea of the monsters as tailor made events for audience satisfaction. I believe it was these films that cemented the idea of the monster film in which the villain is the protagonist and the primary draw. These types of rally films and crossover events would eventually cheapen into the b film range but their legacy and eventual revitalization in the 50’s has immortalized silly films like these into one of the most interesting styles of old horror.