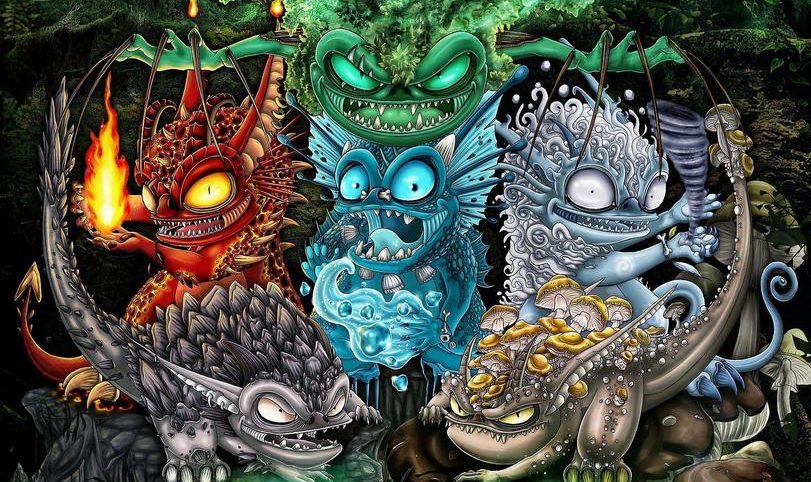 SVARTBY is a Swedo-Russian outfit hailing from Saint Petersberg, where, apparently, they have wild imaginations… How long did you stare at that album cover? A little right-click “set as desktop background” action perhaps?

Elemental Tales, is the 3rd full length effort from these guys and they have yet to disappoint. Thematically, the band delves into the more fantastical side of folk metal with them opting to create their narratives from in-house mythologies and, likely, oceans of vodka. That much is pretty clear from the album art. What’s not clear from the album art is that behind the imagery is some really solid musicianship. Trollzorn Records really knows how to pick ’em.

Perhaps it’s the album art that brings out these adjectives, but what you’re getting into here is a style of folk metal that combines the traditional folk instrumentation, pace and vocal types with jubilant melodies and intermittent sounds that work to create film-score style tracks. Each, containing highs and lows that correspond to the action of the plot (er…lyrics). RE: action of the plot… From their website:

There are 6 Elements in the magic circle of Svartby: Fire, Water, Air, Earth, Wood and Mushrooms! Yes, Mushrooms are a separate mystical element, and here we mean ALL mushrooms: those you eat (edibles), those you don’t eat (poisonous toadstools), those some people eat (psylocybe) – every single mushroom you can come across in the forest are subject of the Mushroom Element and has its own imp. No special relation to drugs here )

The impersonation of each Element are small devils. They are born by the Element itself and dissolved in it after death. These are semi-sapient, merry and mad beasts, who can be sometimes controlled by Svartby’s witches, and only in few cases. Most of the time, they’re rampaging all by themselves, laying destruction on humans and restoring nature’s rights.

If you haven’t cast these guys aside for lack of cover winterscape, you’ll be pleasantly surprised by how heavy, hard and yet, interesting, the music is. It’s got the folkiness of a FINNTROLL or KORPIKLAANI, ruthless riffage a la CHILDREN OF BODOM and the heroic melodies of an 80s cartoon series.

One of the strongpoints of SVARTBY is they’ve always had great self-awareness. I consider myself highly tolerant of experimental epicness, but like everyone, I have my limits, and there’s a tipping point on every uber-folk album where you just need to cut the shit and switch to IMMORTAL (winterscapes all around!). As much as I dig SVARTBY, I think they too realize, that even great albums like this lose their appeal if they carry on too long. Their tracks are 2-4 minutes max and their entire album is only 31 minutes, about half of what a typical folk metal album is. I believe it’s this self-awareness that has led them to keep their songs short, sweet and ready to quickly ensnare the casual passerby… That, or a 3 for 1 vodka shots happy hour interrupted the studio session… \m/