A Brawl in Ravnica (Part 2) 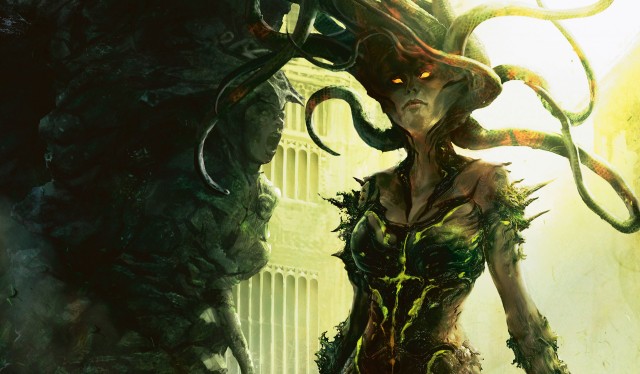 If you remember my previous article in regards to a Brawl In Ravnica, I was discussing the various commanders one could use if they were attempting to play Brawl. I think I am going to extend this article in just discussing the cards themselves and their implications as a full commander. My playgroup and I might be moving away from Brawl until it sorts itself out for a more wild west of casual play. This does not mean the rollercoaster format of Brawl cont be of interest to other people so let us delve back into the world of Ravnica and see what type of legendaries are here for us to use. Even though Brawl maybe wavering in its popularity and longevity, its inception has given my playgroup numerous ideas for building and formats. While these things may not see the outside of our basements, being in a healthy playgroup without tight restrictions feels refreshing as if this is the way the game is suppose to be played. While I enjoy most of the sanctioned and official causal formats, forging ones own path is pretty cool. Well look at what we have here, a 3/2 with haste for 3 that slams down on the table and immediately starts swinging. The mentor mechanic also buffs another creature and that creature now has protection from…well…other damage sources. The sheilf which Tajic gives wont save your creatures from combat damage but other things like damage sweepers and other tricky common removal tactics. The mentor is nice and seems like a good thing to rest on a long term gameplan but it’ll depend on if you can build an army of mentors with different triggers. A full boros mentor deck looks fun if not clerical in its dice distribution. The mentor ability mirrors, and maybe echoes, the nightmare of the Edgar Markov vampire deck which had armies of small creatures getting bigger each turn. The first strike is going to pay off if other creatures (bigger creatures) get on the eild with Tajic allowing him to become a death striker for 2 each turn. Boros heavily depends on the working of the group and most of these cards seem good when one is already winning. This means that catching up in these colors may not be the easiest to do in a historically week multiplayer color pair. Aggressive strategies can work in EDH/Brawl and itll depend if the rest of the deck has the skills to live up to its flavor. Thiss tajic maybe better as the support cards rather than the commander but look at his suit of armor. BEHOLD. My new commander for Brawl(ish). For my current playgroup we are doing 60 card singelton but with the addition of larger manabase and also any reprints that were included in the recent guild kits. These are going to be flavor decks based around each of the guilds and since I never have built Izzet before, having this crafty dragon seems to perfect for the job. Niv Mizzet in any of its iterations has always been a strong, if not expensive, thing to bring out but let us look at what we are getting for 6 mana. A 5/5 flying dragon is pretty good for 6. The triple blue and red seems steep but in a two color deck with better mana base is fine. At its entry requirements, this is a good card, and now take all of the other qualities and add it on top. Casting spells that draw you cards? Yes. Dealing damage when you draw cards? Yes. This card has it all and it is so flavorful it is going to be hilarious when I do not get it working. In all seriousness, this card looks perfect for a spellslinging deck and just adds benefits to you doing the things Izzet is suppose to do which is draw cards and cast cheap spells. Add to this jumpstart which just makes casting things viable from the graveyard. Even in just a narrow Ravnica only block this Izzet deck is going to be either really good or really terrible and its going to be wild just like its flavor. This is a card that would be broken as a commander if not for the last stipulation. There is a lot to do get this working as well as doging removal from a card with a big bullseye on it. Dimir seems to be the king of alternate win conditions and this is a fun card that almost invites some sort of janky brew around it. To be honest if one would allow this to get shuffled back into the library with some sort of repeatable tutoring effect, it would cut the additional tax it would incur as a commander. Yeah, I know things are starting to get stretched when big ass demons and more straight forward cards would probably be easier. But that is not how Dimir operates and sometimes walks around the house to break into the back to open the door that was unlocked in the first place. Dimir’s new mechanic is surveil which is like scry but puts the cards in the graveyard. Surveil is going to be broken in other formats but maybe for Brawl itll be tempered. Hey, I wonder what colors do really well at reanimating cards from the graveyard. Erata would have been great if given some surveil mechanic or put into the graveyard afterwards but as a weird ass alt win condition it looks like something only the goofy would try to experiment with which is a lot of people. Dimir has always been my favorite color combination and its flavor as the sneaky ass shadow cabal of Ravnica is the best in the world. Cheap Sacrifice effect with card draw? Yes. Enter the battlefield effect that only works with a full graveyard? Ok. 6 Mana? Eh really? This would be a very good card in the 59. but with Vraska as an already top contending commander, Thousand eyes over here doesn’t have much to offer. The Golgari mechanic for this set is Undergrowth which cares about the number of creature cards in the graveyard. Surveil is in black which means Golgari has access to some of the best yard filler like Doom Whisperer which allows you to pay 2 life and surveil. Getting back some of that life with Izoni’s activated ability is great but the card draw is really the key. There have been some great Golgari commanders like Jared, Lich Lord which could sacrifice creatures to the graveyard sending damage to all opponents. Izoni seem like Jared’s less broken cousin with a a higher mana cost and a less meaningful ability.Instant speed sacrifice effect that draws a card? Yes. Caring about trying to get an army of tokens based on the creatures in your yard? No. Now if one was to combine the sneaky activities of Dimir with the punch of Golgari in some three colored combination, then it would have the card draw, power, and will to be a strong deck. I don’;t think well see the BUG, Sultai color combination in Ravnica except maybe in the third set but thank the Gods since that combination has always been nasty and powerful. BEHOLD. The better Selesnya commander. Let us look at this once again. a 2/2 for 2 is decent even without abilities attached. It is what is called a bear (based on the classic 2/2 for 2 Grizzly Bear card) and a bear is always seen favorable among people who love low mana curves. Now let us look at the abilities. Tap Emmara and get a 1/1 soldier with lifelink. Alright I know it is not the best but Selesnya already has some chase cards like Pelt Collector, March of the Multitudes, and its split card that will make things interesting for the all out attack. GW already has a ton of token based strategies in Brawl and outside of brawl so making Emmara your commander doesnt seem like a hard choice even if it is not a breakable effect. I know, I was trying to look at cards that allowed one to untap target creature when another creature entered the battlefield but all I found was blue cards. Selesnya may want you to play fair but swinging an attacking and immediately getting a blocker does not seem to be that bad of a deal. Oh with a bunch of anthem effects and cheap creatures, this card seems like a great commander that doesnt rely on its strengths to make the deck work rather just uses it a very effective tool. It isn’t broken rather just decently fair.