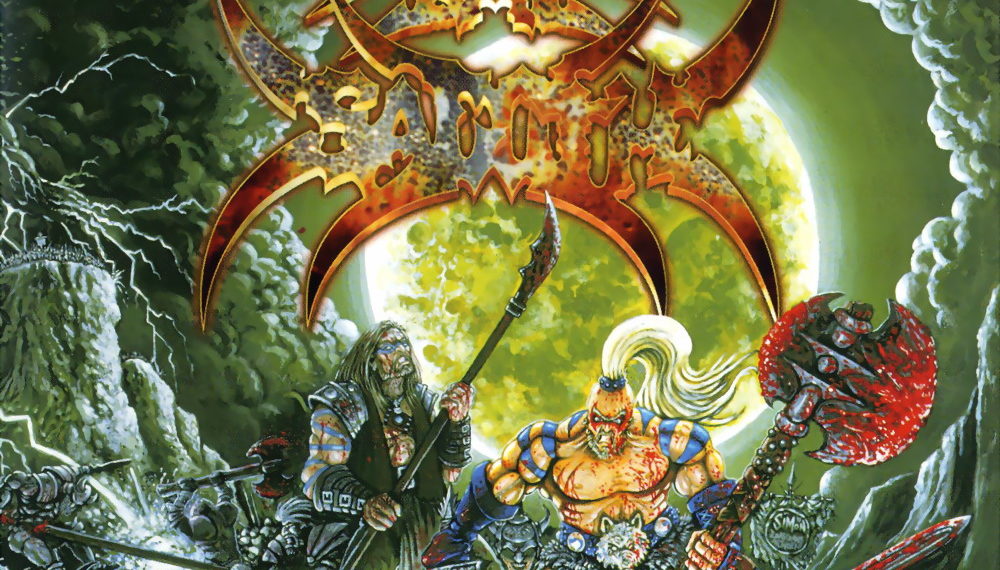 Not long ago, In the not so ancient times of written/recorded music, seemingly many eras for us mere mortals, but only a single grain of sand in the hourglass of cosmic eternity, one band hath weaved the most epic of musical tapestries. Bal-Sagoth. Yet by some cruel curse, or perhaps blessing, Bal-Sagoth have remained mostly hidden within the vast vaults of metal, only to discovered by the most elite of musical archaeologists. A most treasured find to those worthy, as their musical genius is not matched by any.

“Battle Magic” the the third album recorded within the audible frequencies for mortal ears, and a masterpiece it remains. Every track contained within the album, is a steadfast example of songwriting perfection. The track opens with the instrumental title track “Battle Magic,” which gradually gets you musically acclimated to the Bal-Sagoth universe before they sound the battle horns in “Naked Steel (The Warrior’s Saga).” This song starts the album off perfectly, it makes me want to unsheath my dragon emblem sword, climb into my chariot (Subaru Loyale wagon), and ride forth to conquer the whole of the Puget Sound region.

The epicness continues with “A Tale from the Deep Woods.” This is perhaps one of the better known Bal-Sagoth tracks, as it is totally awesome. Come on, “My life bleeds forth, unto the earth, to slake your roots, great old king…” is one of the best lines in all of metal! Next is the space traversing “Return To The Praesidium Of Ys.” This gives us a glimpse into the more cosmic side of Bal-Sagoth that is explored further in the next three albums (especially “Power Cosmic” which is name dropped in this tune). It tells the tail of a sentient immortal being with the power to traverse the many sides of the multiverse (suck it plain old universe). I have a great memory of being on a road trip with my father, and on my constant quest to get him into metal, decided to show him Bal-Sagoth. After playing the “Return To The Praesidium Of Ys,” he was blown away that bands made this kind of music. I believe the only word he could speak was “WOW.”

Bal-Sagoth is really good about putting more than one instrumental on each album, and so we commence with “Crystal Shards.” It’s a rather uplifting track, and a nice break from the epic metal we just heard. Close your eyes, and ride the smooth sounds of “Crystal Shards” all the way back to Hyperborea. Now for the best fucking long song title ever: “The Dark Liege Of Chaos Is Unleashed At The Ensorcelled Shrine Of A’Zura Kai (The Splendour Of A Thousand Swords Gleaming Beneath The Blazon Of The Hyperborean Empire Part II).” This is my overall favorite song on the album, amazing composition and continuation of the second part of the Hyperborean Empire Trilogy.

The album does not let up at all in its final four tracks. “When Rides The Scion Of The Storms” is the tale of an immortal warrior, and his recollections of centuries of slaughter. From Atlantis to Rome, this guy has seen it all. Next is the gloriously over-the-top “Blood Slakes The Sand At The Circus Maximus.” Which is essentially the movie Gladiator, but catchier. It ends with the most catchiest of melodies, I really can’t say that enough. The last metal track on the album is “Thwarted By The Dark (Blade Of The Vampyre Hunter).” A great track, perfect soundtrack for killing vampires (or playing Symphony of the Night), and has my favorite chorus on the album: “Gods of Wrath, Here my Vow… Sate me with revenge this night. Come to me, darksome fiends, taste the edge of ensorcelled steel!” The album closes with “And Atlantis Falls,” another epic instrumental. It starts bombastically, you can really visualize giant waves engulfing the great civilization of Atlantis. It ends on an almost melancholic calm note, as vast amounts of history sink into the ocean. This is the best example of Epic Metal ever written, and I really can’t encourage one enough to LISTEN TO IT RIGHT NOW.