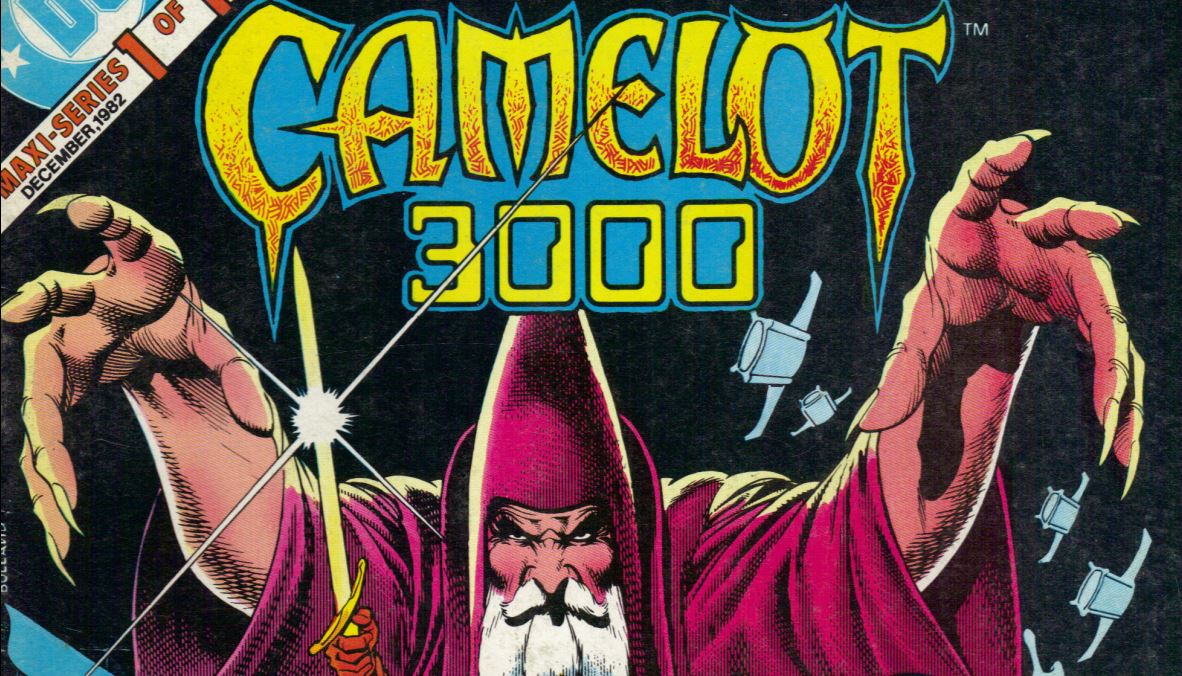 I mean, why wouldn’t you read a comic called Camelot 3000? Just by the title, one already has the tone, style, and pretty much all of the plot beaming like a beacon before even stepping foot into the story. Projecting a past legend into the future comes with many expectations, none of which will be able to walk the line of seriousness for long. From the opening pages of Mike W. Barr’s miniseries, Camelot 3000 typifies a pulp adventure by traveling to the furthest reaches of familiarity and ridiculousness. I mean, why wouldn’t I review this type of story? It has knights in space.

In the year 3000 London is invaded by an alien force, sending many of its inhabitants fleeing to France. Tom Prentice, a student, sees his family killed and then takes refuge in Glastonbury Tor, only to accidentally stumble on the burial site of King Arthur. Through some happenstance that doesn’t really matter, King Arthur is awoken only to descend his sleepy wrath onto the invading aliens. In Earth’s greatest hour of need, Arthur and Tom set out to find the rest of his court, who are not buried but rather reincarnated and have to be awoken. Some of these reincarnations of legends are logical transformations. Guinevere is a military commander while Lancelot is a billionaire who happens to own a floating asteroid that is eventually turned into New Camelot. Other characters are more ridiculous, including Sir Galahad as a samurai warrior, Tristan as a women, and Percival as a normal criminal turned into a genetically mutated monster called a Neo Man. Take all of this and put Morgan Le Fey as the leader of the alien invasion and one has a rousing, sidesplitting adventure that tries to break the very fabric of the Arthurian legend. I keep mentioning the sheer lunacy of setup for a couple of reasons. One, it’s silly. Two, this is pretty much the strongest aspect of Camelot 3000 and why it works on a pulp level. The characters seem flat, the action is stilted, and dialogue is hand fed with chunks of exposition. There is nothing in Camelot 3000 that is surprising, aside from how much of the original legend is given a garish costume makeover. I only make this criticism because Mike W. Barr is a competent writer as seen with his Batman titles. Barr is also a more than established pulp writer, with titles ranging from Weird War stories, Doc Savage runs, and a slew of mid career superhero titles. Because of this however, Camelot 3000, for all of its absurdity, never becomes dull. The story is incapable of becoming boring because there is just too much crazy shit to put into it. Just when you think there is nothing else left, Excalibur appears clutched in the hands of the Lady of the Lake rising from the green waters of a waste treatment plant.

If it seemed like I was wavering on my judgement of this comic, it is only because of a few threads of near insanity turned into interesting developments. Tristan’s’ reincarnation as a woman sets in motion a large subplot of gender identity, not only when Tom shows his affection for him but when his former lover, Isode, appears and begs for his love. This gender conundrum throws Tristan into the clutches of Morgan Le Fey, who promises transformation in exchange for a betrayal of the round table. Though that doesn’t happen, the transgender character in a seemingly normal sci-fi storyline is made more interesting when it is written and then tackled effectively. The entire drama of Tristan is mirrored by Percival’s more monstrous and unresolved transformation. For the mid 80’s, transgender identity was not a topic explored by the majority of comics and the fact that it takes place in bat shit crazy world is all the more weird and interesting. I am still standing by this story being socially progressive despite the fact that it pretty much turns into girl on girl kissing at the end.

Tristan’s crisis, along with other plot devices, allow Camelot 3000 to travel in surprising directions. Because of the familiarity, or at least the availability of the original story, Camelot 3000 can travel further in terms of adaptation. Morgan Le Fey’s backstory is a space opera that sees her traveling to a distant planet only to be scared and genetically mutilated while enslaving an entire planet for her bidding. The love triangle between Arthur, Lancelot, and Guinevere travels to such a Daytime soap level it becomes obnoxious. Commenting and orchestrating the events of the alien invasion are puppet leaders that include Modred, a reincarnated United Nation official. Oh, and then there is is the Holy Grail, which has been made into a suit of armour. By the mid point of the story, the reader has traveled so far into the narrative that reaching a conclusion is necessary for mental well being.

After a failed assassination attempt at Arthur and Guinevere’s wedding, and the banishing of Guinevere and Lancelot after they were once again found cheating, the group travels to the tenth planet in search of Morgan La Fey. Arthur splits an atom with excalibur and causes a nuclear explosion, which renders Morgan Le Fey defeated. By the end of the series half of the round table is dead and the other half come to terms with the problems they found alonguiij their journey. Even though I mentioned the action being stilted, Camelot 3000, at least by the end of the series, becomes so filled with absurdity that the action allows the story to travel at a graduated pace. In fact, the action sometimes breaks up long bits of reality-bending dialogue and plot devices that make the story a wild ride.

Camelot 3000 is not a story that is well known in the annals of comic history. In fact, just its name and cover pages are so silly, that it is difficult to take them seriously. What Camelot 3000 can be is a 12 issue miniseries that wraps the participant in blankets of both familiarity and speculation. The fact the series breaches a level of self parody is only entertaining once all notions of seriousness are discarded. The Arthurian legends have been reinterpreted so much that there isn’t much scarcity left with any of the characters. Pitting them against tropes of science fiction only feels like the most logical thing to do in a universe filled with hilarity. 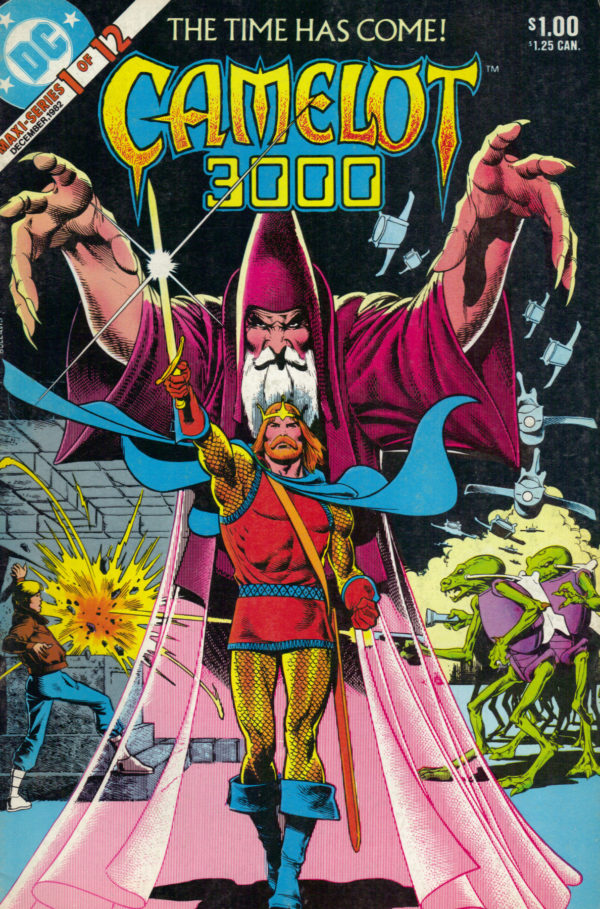