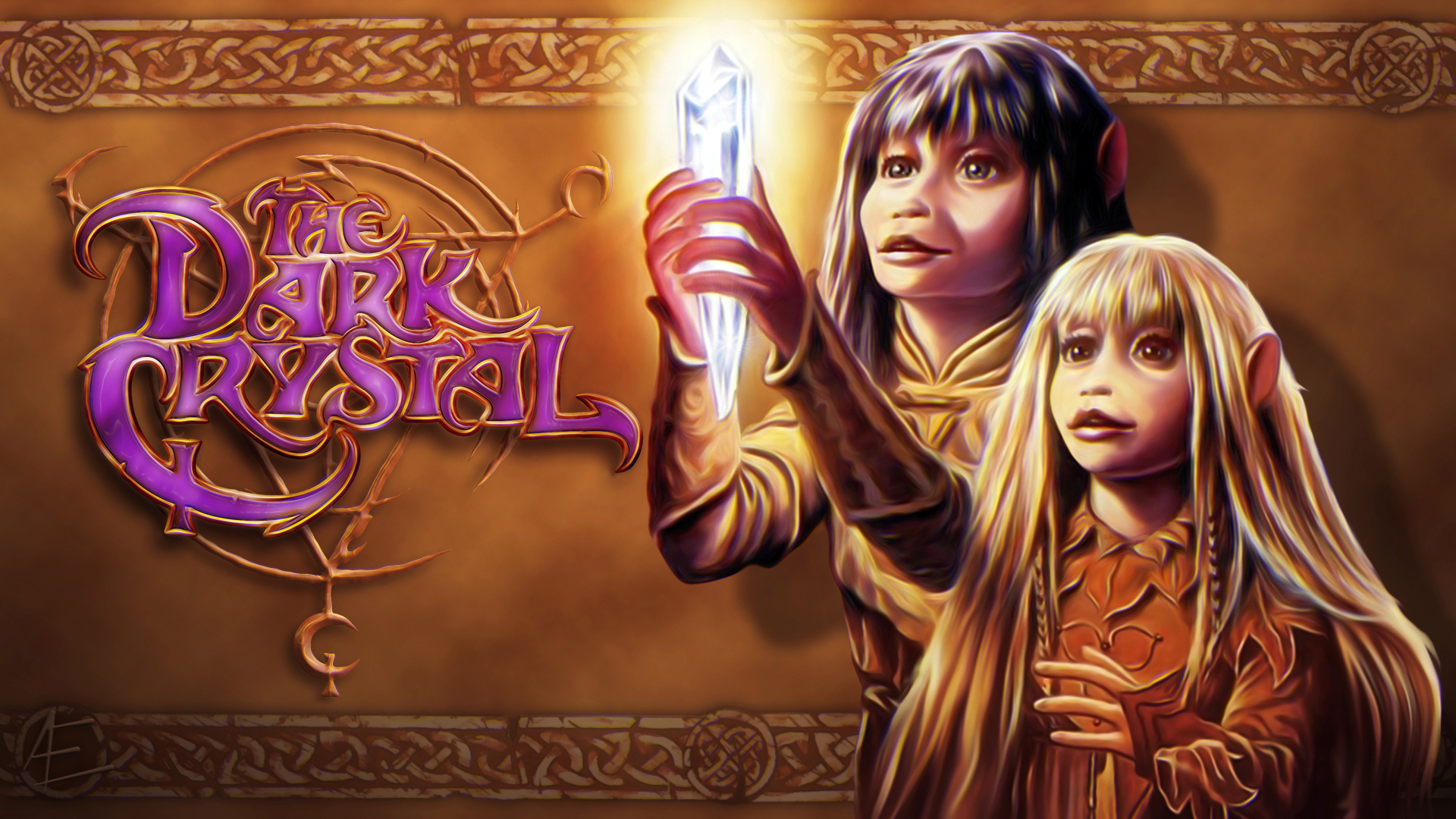 I absolutely despise when people chalk up drug use to imaginative creation. The common joke of a creator being under the influence of psychoactive drugs sort of dismisses any creation as some far flung acid dream and weakens its actually validity as true imagination. It is also a part of a strange grey zone where drug use is okay in a culture as long as it was done in the past and comes with an interesting narrative. I have already attested that imagination can come without the aid of drugs and some people are just natural visionaries with worlds which lay outside of convention and reason. I keep repeating this to myself silently whenever I watch any sort of Jim Henson production.

The Dark Crystal was released in 1982, which in the timeline of Jim Henson was at the peak of his career. Fueled by the massive success of the Muppets in the 60’s and 70’s, Henson’s work with the Star Wars series gave him all of the freedom in the world to create his own dark fantasy film, employing all of the resources allotted to him. The Dark Crystal is a tale of mortality and adventure with resounding humanity told with an absence of any human actors. If any have forgotten this movie, no where, besides some distant shots, are there any human actors, but rather hulking monsters and protagonists without moving jaws. I would say I cared about these characters like humans but I was only really rooting for Fizzgig.

The movie starts with a particularly grim overtone in that two races were born from a cracking of a magical crystal. The Skeksis are horrible looking bird dinosaurs while the Mystics are less horrible looking sloth wizards. Already the film introduces the dichotomy between naturalism, with the peaceful mystic wizards, and commercial materialism with the wretched Skeksis. It takes about two seconds to see which side Henson and his creators are on. Imagination does not equal drug use, imagination does not equal drug use. In the middle of this surreal conflict is Jen, a gelfling, who is tasked with finding a lost shard of the larger dark crystal, which is now being used by the aristocratic business men, I mean Skeksis, to hold power over wherever the hell this takes place. Hippy dippy fantasy ho!

Dark Crystal is believable. It is this aspect, in my opinion, which has allowed it to become ingrained in cultural memory. Along with this, is the allowance of frightening imagery mixed with child-like imagination. The plot for Dark Crystal is centered around death and rejuvenation. Add to this some fucking frightening creatures and one has a family movie that would scare the bejeezus out of 7 year olds and 47 year olds alike. Despite its dark undertone, Dark Crystal is hallmark of a good family film, where the subject matter is broken down for children without sacrificing narrative for adults. It is this formula that makes this film, at least in my mind, a classic for further generations. Shit, I am sitting here decades later frightened to have my essence sucked out by SkekTek the scientist. In the script it said something to the effect of “make everything as scary as as possible.”

Jen’s journey to get the shard back to the Dark Crystal is followed by a parade of tragedy. After meeting with Aughra and getting the shard, the Garthim (Skeksis Hell Beetles) destroy everything and take Aughra hostage. Well, no problem there. After Jen meets with Kira, who aids him on his quest, her home is also invaded by these hell beetles and her village of Podlings is taken hostage for Skesksis enslavement. Goddammit Jen, stop going places. Just get the shard back to the Dark Crystal. Jen’s journey leads him to the Skeksis palace on the backs of Landstriders, which are just humans on stilts galloping on all fours. You know what? When I said this movie was believable I meant everything except for those Landstriders. They just look silly.

This film works its way up to the Conjunction, a meeting between the world’s three suns which marks the time the Skeksis can gain immortality if the crystal is still broke. goddamit Jen where are you? The film concludes with Jen getting his act together and reconstructing the Dar— er light crystal. The Mystics and Skekisis combine into a spectral race of not so terrible looking root ghosts. The symbiotic nature of both races combined with the idea that the original race was filled with good and evil before their split, makes a well rounded story and also gives the protagonists (Mystics) some critical flaws as good cannot be effective without evil. I mean how fucking long did it take them to crawl to the palace? Days? Months? Come on guys. The root ghosts then float away, leaving the crystal of truth for the gelflings and the podlings, which I assume are all that inhabits this crazy world. Anyone else? Just don’t touch the crystal, otherwise you will split into homogeneous archetypes and things will get really strange again. The Dark Crystal is an easy pick for longevity. The Muppets combined with the work in Star Wars had made Henson, along with Frank Oz, a household name. In fact, subsequent generations are still being introduced to the imagination of both creators, which eventually leads them to the Dark Crystal. This is a fine film to watch repeatedly, as I can not imagine a world where you haven’t seen this and do not sometimes imitate Chamberlain’s distinctive throat whine.