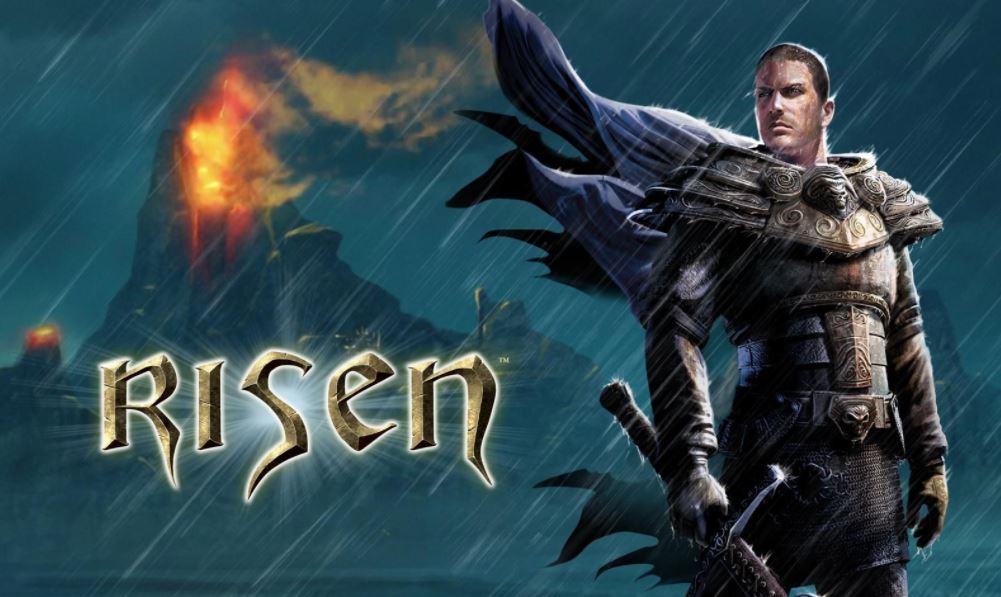 When I said I’d review this game, it was because I a lot of my reviews are quite favourable, and don’t seem to review anything poorly. That’s why I chose Risen. I had played it before, slightly, so I knew it wasn’t great. But that was then. This is now. It still sucks ass.

It got off to a bright start. It looked a lot better than I remembered. And it was an intriguing opening. You watch some guy with a crystal eye-patch throw magic at a giant monster. From your characters perspective, he’s dancing around like a moron throwing fire at a storm. So either the monsters are invisible or the magic man is completely insane. Whatever the answer, he’s at least sane enough to run away when his magic has no effect on it, leaving it free to capsize your ship and leave you waking up on a beach with your sister unconscious next to you. You’re left to wonder what the hell just happened for so long, I never found out. I haven’t finished this game. Its just so dull. See, take away the people and it doesn’t look that bad.

Visually the game looked better than I remembered. The shipwreck and the stormy beach all looked pretty good, the jungles and mountains just a bit further in look even better when the sun starts shining. It just such a shame the developers had to put living things in it. All of the people just look awful. They looked bad when this game came out and they look worse when I see them again now. The characters look like they belong on an early PS2 game, not on a PC or 360. The fact they have to stand on these beautiful environments makes everything look worse than it probably is. But that’s just initial impressions. Once I got into it I realised it looked quite similar. They made the mistake of putting the game on a small island, so there isn’t really much in the way of variety going on in this place.

From what I was able to find, there are a grand total of three settlements that qualify as towns. And depending on what choice you make near the start of the game decides which of these you actually see. You can side with Don Esteban, who controlled the Island before the Inquisition came, or the Inquisition. Siding with the Inquisition is easy. If you try and go anywhere that isn’t Esteban’s camp, the inquisition will knock you out and take you to their keep, where you won’t be allowed to leave until you pass warrior school. If you go to Esteban’s camp, he has jump through about 20 different hoops before he trusts you and then I don’t know. I was on a mission for him when the Inquisition knocked me out and took me to their keep. Which is where you meet Inquisitor Mendoza. The guy from the boat at the start of the game.

With name’s like Mendoza and Esteban, you’d think the cast was Spanish or Mexican. But no, they are all British. Mendoza is voiced by Andy Serkis, who plays Gollum in LOTR, and Esteban is voiced by John Rhys-Davies, also from LOTR (Gimli). Which is why I don’t understand, with big names like that, why is the acting some of the worst I’ve ever seen. It not that its poorly written, some parts are really well written, and I can only appreciate that when I mute all of the voices. Its worse than Two Worlds 2 ever was. As soon as you add people, everything looks like ass.

Combat is fundamentally broken. Every enemy is better at dodging than you, so much so that can always jump out of range of your staff or greatsword, but you have trouble dodging their dagger. Every fight against more than one opponent is harder than it needs to be, because the targeting system sucks. And if you want to block, you better make sure that you read your opponents moves carefully, because some of them have power attacks that break through your block and I’m pretty sure break the sound barrier.

All in all, the game is terrible. It had grand ideas, terrible execution and a kick-ass trailer. I don’t know why they made a sequel to this, but hopefully its a bit better. I may summon the courage to try it one day. But not for a while yet. I’m going to take a hefty dose of Skyrim to get over the foul taste disappointment and regret this game has left me with.