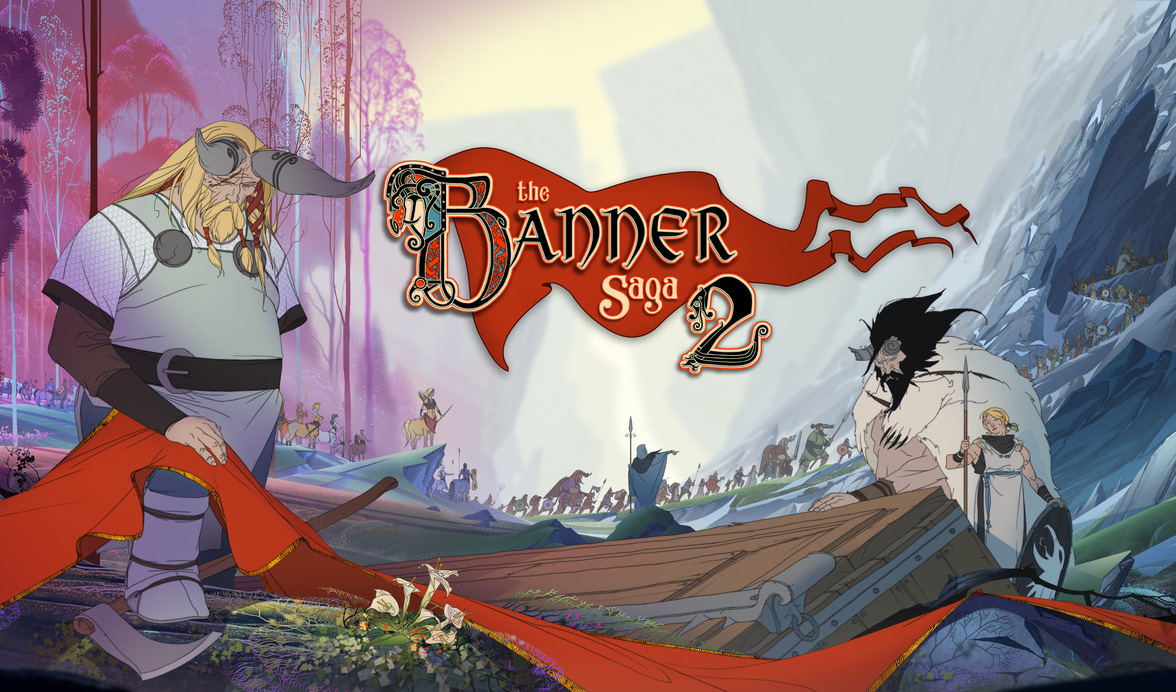 The Banner Saga was, and is, one of my favourite games of all time; a strangely poetic experience of a crumbling Nordic world, dead gods and mythic horned giants told almost entirely through the medium of an extensively updated version of the Oregon Trail. Battles are fought, secrets are discovered and your caravan will wither or prosper based on the choices you make on the way to your destination.

Banner Saga 2 is pretty much the same thing, so much so that it almost necessitates a recent play through of its predecessor. This isn’t just to create a save to upload but because, as far as I could tell, there’s absolutely no tutorial to introduce you into the game’s systems, making it a bizarrely blunt entry for new fans.

Not that there’s any excuse for not playing the original. A vastly interesting nordic experience through an original world is the kind of thing that doesn’t happen often, and Banner Saga is one of the best written RPGs in recent memory. Perhaps it’s for this reason that I’m more than willing to wave off what would otherwise be my largest criticism: they’re basically the damn same. Not the story, of course, that’s directly continued, and the combat was so good it feels like a mercy that what changes there are are subtle. More of a deepening of the already exceptional systems than a renovation, resisting the temptation to drastically re-design that has tainted other memorable sequels. The Apocalypse gets a lot darker this time around, somehow.

Thus biggest problem I can muster about it is that leans too heavily on the enjoyment of its predecessor. They’re so alike that if you hated the first you’ll end up ambivalent at best. There’s just not enough difference, leaving it feeling a little more like an episode of the Telltale variety than a full sequel. That’s probably part of the point, but it suffers slightly from the fact that much of the impact that made last time’s jaunt so memorable is lost, not from a mishandling of the subject, but familiarity.

The writing’s better this time around. Sure, the music is even finer, more impactful and sure, the combat is more weighty and meaningful than ever, but a huge part of why I loved the first Banner Saga was the introduction to the world in all it’s doomed splendor, and that’s something I can never see afresh again.

There are still surprises, and more than once I’d found myself lured into a false sense of security only to be ruthlessly invaded by grunting vikings and mystifying horsepeople. The twists, the mystery and strangeness of the setting is still fresh and the genius of it’s central theme (getting the fuck out of Dodge before you drown in the sea of stone men warriors), keeps everything moving onwards, stopping you from getting too good a handle of the world and keeping everything fresh. Simply put, you’ve never got the kind of time other RPGs would give you, keeping the tension high and the constant pressure forcing difficult decisions inside of battle and out of it. Whether or not to rest your caravan is one such choice. Heroes who’ve fallen in battle will need time to get back to full strength, and a warrior weakened by endless marching won’t do nearly as well in combat, so resting is practically a necessity to recover from poor combat decisions, but supplies are, if anything, more limited this time around, meaning that finding a balance is imperative if you don’t want to end up feeding the crows. Losing fights costs time, most of all, and in the endless midday sun of a dying world, time is exactly what you don’t have.

I mean, not unless you want to feed Jörmungandr the world serpent. In the end, though, the thing I enjoy most about the Banner Saga is the feeling of place it creates. People struggle, the caravan moves and the landscape is a world burning, but perhaps most noticeable is the collapse. You’re always surrounded by evidence of the before times, struggling families and bandits and mercenaries stuck in the eternal struggle to live another day, and despite ancient RPG expectations, you can’t save them all. It’s quite possible to form a massive and triumphant war party, welcoming every straggler you find, and equally possible to find yourself starving to death because of a thousand hungry mouths.

That there are real, measurable consequences to trying to save everyone is perhaps the most meaningful morality system I’ve ever come across in a game. It’s not about karma points of meaningless dev-sanctioned pats on the back. Being a hero is just harder than being selfish, and everyone you save you must take responsibility for. This isn’t a game about choosing good or evil, it’s about skill and planning. Not about how many you would save, but how many you could. While some massive budget RPGs seem to compulsively include the “make everyone happy” button behind a conversation challenge, Banner Saga simply doesn’t bother.

There is still meaning to conversations, some of them with massive hidden consequence, but finding out if you’ve doomed yourself to betrayal or inspired your people is part of the long game, little choices piling invisibly like stones, forming a bridge or, more likely, an avalanche for you to wander into later on. It all adds to the feeling of discovery, and through the quality of the writing, discovering you’ve accidentally shattered an important character’s respect for you is exactly as shocking as discovering what you thought would be a safe haven is a pile of charred rubble.