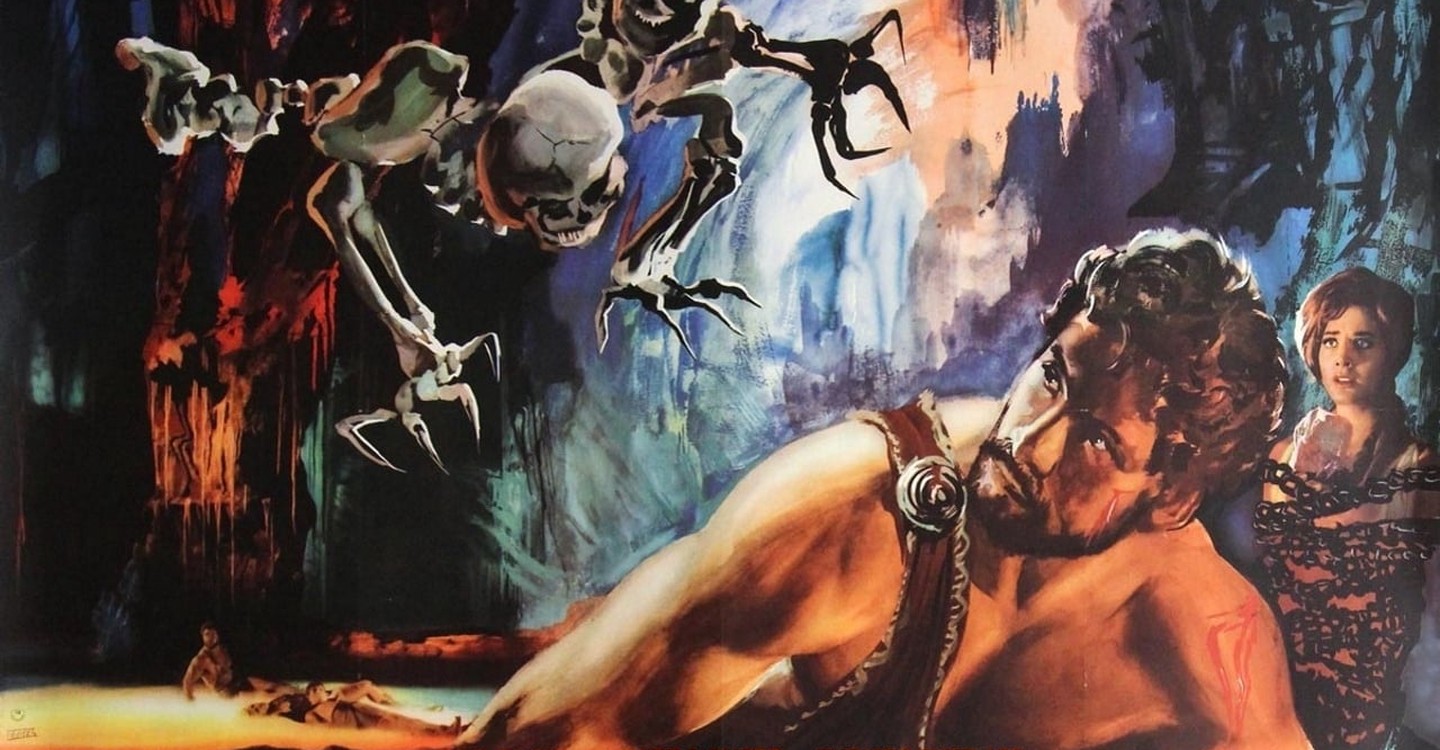 As we approach the fourth Peplum review it is important to note that we will be skipping in continuity. I understand that the adventures of Hercules, played by different actors and with non connecting storylines, may already feel disconnected, but for the sanctity of criticism we will mention the break in sequence. Ercole al Centro della Terra, translated Hercules in the Center of the Earth but for some reason titled, Hercules in the Haunted World, is the 6th film released in the Hercules series. Our hero is played by another bodybuilder, Reg Park, who already debuted in Hercules and the Captive Women. I understand how skipping this could anger some purists, since they would like to have seen Park’s debut with the captive women, but because these films are often hard to find, we will be moving on. Plus, who couldn’t be excited for Hercules facing off against foes of the underworld?

It is also important to note that Hercules in the Haunted World, as well as the first two installments of this series were directed by Mario Bava. While this name may mean nothing to some, others may recognize him as the genesis to what would be known as the Giallo genre AKA the Italian genre full of sexy violent mysteries and stalker thrillers. Bava’s work with Kill Baby Kill and Blood and Black Lace would go on to influence future generations of specific horror. For now, however, Bava’s touch would only spice up this trainwreck of a story. Hercules descent into the underworld does give Bava the artistic license to fill the scenes with hilariously weird psychedelic effects. Seeing how this is still 1961, the surreal sets experienced in Hercules in the Haunted World is nothing short of bizarre and fun. Also, I do promise that Hercules will throw boulders at zombies so just bear with me. This film was released in 1961, which was way too early to be thought of as being influenced by the psychedelic counterculture. I say this because throughout the film, surreal lighting and atmosphere is employed even outside of the underworld. The use of neon lights makes the film seem like it would not be out of place had it been a music video in the late 60’s. The fact that this headfest is a Greek heroic epic is even more baffling when the set designs look like an art film circa 1969. I believe the leeway was to depict the underworld as nightmarish but the whole thing, in retrospect, feels influenced by things that have yet to become influential.

The film begins with Hercules being Hercules and showing ridiculous feats of strength and fighting off some ne’er do wells sent by a rival king. Our hero is off to meet his love Deianira. Upon traveling to the city, Hercules learns that Deianira has lost her sense and is caught in an unearthly trance. He is told all of this by our main villain King Lico, AKA motherfucking Christopher Lee. After talking to the Oracle of LSD, Hercules learns that the only way to save his love is by traveling to the underworld and picking up a magical item. This magical item is the Stone of Forgetfulness. If this does not already sound like a proto Dungeons and Dragons campaign wait until they have to travel to the Land of the Hesperides to get the golden apple, which will allow him to get to Hades, which will allow him to get the stone so he can save the girl. Are we all clear on all this?

The bulk of Hercules in the Haunted World takes place in fantasy lands, either be the Lands of the Hesperides or Hades. Hercules and his buddies Theseus and Telemachus set off to procure the golden apple from the land of eternal night. Not only does Hercules successfully retrieve the apple from this place, but he defeats a stone demon that has been enslaving the nymphs and forcing them sacrifice any intruders to him. Hercules puts a stop to this by using the demon to break the wall that is a barrier into Hades. Seriously stone demon fucking take that.

Christopher Lee, you are alright in my book…forever.

The Haunted World stands above other Hercules films only because of its visual narrative. Make no mistake, the script for the film is as thin as others in the series, yet Bava makes use of what little he has into something that is at least halfway interesting to watch. Despite the near destitute budget, the creative use of what appears to be stage props makes for an interesting foray into the underworld. Hercules and company get the stone but also finds Persephone, who for some reason in this story is the daughter of Hades and not Zeus. Whatever. Persephone tricks Theseus into falling in love with her and taking her out of Hades. She then becomes the catalyst of Theseus breakup with Hercules, as he becomes obsessed with her.

To wrap all this up, Deianira breaks the trance because of the stone. Afterwards, however, she is carried off by King Lico in his attempt to abscond with the beautiful lady. Hercules chases him into some weird subterranean lair and faces off with Lico and his army of the damned. Forget everything you thought about this movie and imagine Hercules fighting zombies. It is amazing. There is a scene when our hero is picking up columns of stone and throwing them downhill taking out swaths of undead. Just typing that sentence is amazing. Whether or not portions of this film are slow, the conclusion and just general insanity of the ending is more than enough to be entertaining.

I feel that is going to be impossible to find a really good Hercules film. Six films in and the best one is generally passable. I feel that these films are going to be at the mercy of hastily written scripts and a near nonexistent budget. Despite this however, certain directors can make the lack of everything interesting. Bava would later go on to make genre defining films and his work on Hercules in the Haunted World from Hercules Unchained was a stylistic leap forward.